Both Peebs and I were pretty tired and sore for day two of the show.  I had gone out early in the morning to feed him, but when I went back to the show around 9 to start getting him ready, he let out a huge sigh and glared at me. I took him out for a hand walk and graze session for a while, hoping to loosen him up and make him happy.

The show was a lot smaller on Sunday; they were just running the outdoor ring with hunter classes and the two derby classes at the end of the day.  I was able to watch a quite a few rounds to see how the courses were riding.  The courses for hunter day were much more equitation like, with a lot of singles and some long bending lines.  The only actual line on course was a diagonal line set in four, but about half the riders were getting it in five.  My trainer wasn't able to come on Sunday, so my plan was to see how Peebs warmed up and, thinking he was tired, aim to do the five.

I got on a little early for our warm up and spent a lot of time walking him around.  We did a short trot set and he felt stiff in his body, not wanting to bend and soften.  So we went back to the walk and worked on bending and trying to get him to relax.   A little more trot and canter and we popped over the warm up fences.  I couldn't find a distance to save my life and decided I just wanted to make it over all the fences and wasn't expecting any greatness.

They ran our flat class first, after another division's flat class.  They had us preload while they pinned the other class so we got a good long walk around the arena before we were being judged. We hadn't ridden in the outdoor before, but I figured Peebs wouldn't care.  He did stare at the judges booth at the far end of the arena, and at a woman flapping a trash bag right next to it (seriously?!?) but didn't spook. The flat went about as expected, #notahackwinner. He was still resisting bending his neck, but his stride opened up and felt smoother than our warm up.  We pinned fifth out of seven or eight.

Before going in for the flat I had told the back gate ladies I was warmed up and ready and could go in whenever they wanted me to.  They had me down for going last in the rotation, but since almost everyone else wasn't ready I got bumped up. They also thanked me profusely for introducing myself and being ready. Our first round went a lot better than I was expecting.  He did try to slow down going past the gate to fence one, but didn't break.  Two to three was a long bending line that rode well, and we managed to get the lead.  He was rolling right along and didn't feel as tired as I expected so I changed my mind and went for the four in the diagonal line. It was a little long, but felt good.  We did have to do a simple change after the line, and never quite got the same rolling stride again.  I saw the short spot to six and that followed us to a chip at 7. But overall I was happy with the round and we nabbed third for our efforts.

Peebs was definitely more tired for the second round and we didn't flow as well. We chipped in to the diagonal line from two to three, and I should have sat up and added for the five strides.  But I tried to gun him for the four.  He did it, but it was very long and we landed in a heap. We took a couple of strides to recover and fix our lead but I kept seeing the short distances.  He was starting to ignore my hand and lean on me so between fences four and five I sat up and checked him hard. Wasn't the prettiest thing ever, but it worked.  We finished the round strung out and tired, but at least he was listening. We got a fourth. 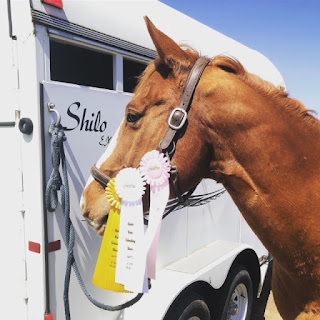 Our last class was supposed to be the derby, but we would have had an hour or so wait and both of us were exhausted. So I scratched. While I was sad to miss the derby, I so happy with how Peebs had been all weekend that I wasn't too upset.  There will be other derbies. There's no point in doing a class when both of us were exhausted. Peebs is such a trooper for putting up my ammy moments and I felt like I needed to give him a break. I definetly don't want him to ever get sour; his attitude is one of my favorite things about him.
Posted by outofashes at 9:09 AM