Last Wednesday A's vet was out to inject another horse and we had her take a look at Cinder. I had Cinder's hock and stifle x-rays sent over to her and told her that Cinder is out of shape, but has been feeling better since the round of Adequan. Dr. D did a quick physical before we popped Cin on the lounge line and then some flexions. Dr. D felt that currently the stifles were Cinder's biggest issue but over all she's looking good. Being out of shape is not helping things, so our current plan is to get her back in shape while focusing on strengthening the hind end and stifles.

What's good for strengthening stifles and getting a horse back in shape? Hill work! No matter what you're doing at SF, you're going to be doing hill work. The property is on the side of a giant hill (it's not considered a mountain in the PNW if it doesn't have snow on it or if it's not a dormant volcano) with the only flat spots being the barn and arenas. The pastures are sloped, walking from the barn to the arenas or pastures involves hills, and all the trails and XC field are either going up or down. So Cinder will for sure be getting in lots of little hill work. But A wants to get her out for walking hill work 1-2x a week.

In my lesson on Friday, we went for a real trail ride. A has taken Cinder out all over the property, but I've only gone on the short trail we did back in February. This time we set out with A on Froggie and planned to do the whole property. Since I didn't know where we were going, A took the lead and Cinder happily followed. I did have to pull her up a few times, as she kept trying pass Froggie, who at 14.2  takes a much smaller step than 17hand Cin.

The whole loop took about 45minutes and we went up and down some pretty steep grades. Cinder was much better than I was expecting, only spooking a little at some squirrels in the bushes. There was a big tractor parked in the XC field as they were tilling the upper half that both Cin and Froggie were wary of, and Cinder wasn't fond of the cemetery at the top of the field but she didn't do anything naughty.  She did try to convince me she was scared of the bridge we had to cross in the woods, but I knew A had taken her over it before, so I kicked her forward and she went over it.

I was nervous at the start of the ride, but found myself relaxing about halfway in and ended up having a really good time. I'm glad I let A talk me into the trail ride and hopefully soon I'll be brave enough to take her out on my own.

Cinder had a bit of a rude awakening going to back to work with Trainer A last week. A is riding her twice a week and apparently Cinder found that one day too many.

Wednesday last week A took her on a trail ride with another client on her horse. They wandered up and down the XC field, and A took the opportunity to take Cinder in the water. They haven't filled the water recently, so it was mostly mud but there was a little water in the center. Cinder didn't realize she was in the mud/water till she was all the way in (too busy trying to make friends with Froggy the other horse), then had a bit of a melt down over the fact she was wet. A said Cin was too tired after going up and down the big hill to throw too much of a tantrum, but she tried.

Thursday was when the real drama happened. A got to the barn early and decided to ride Cinder first. She started tacking up right when horses started getting turned out and Cinder was very upset she had to work and not go out. And there were horses on the Eurociser which was terrifying, even though she's seen that before.  A said that as soon as she got on, Cinder tried to take over the ride. A said Cin hasn't pulled that move since the first or second month she was under saddle. They had it out and A said they ended up having a nice ride, once Cinder realized who was the boss. 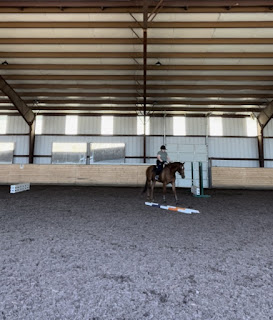 I had my lesson on Friday and Cinder was foot perfect for me. It was hotter than it has been and she was tired, but still tried hard. We mainly focused on me relaxing and slipping her more rein, trying to get the feel that we need for the under saddle classes. The trot work felt lovely, but Cinder still wants to be a little high headed in the canter. We did canter several laps around the arena in a row both directions, without breaking, which is a big improvement for both of us. I'm getting better at feeling when she's going to break and catching her before she does. We ended the lesson with A saying I look more comfortable and confident on Cinder that she's seen in a long while. 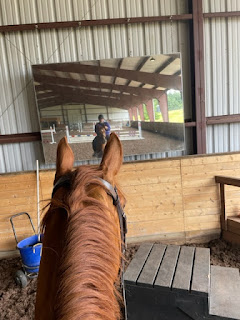 I then proceeded to get sappy and teary eyed, and told A I feel so happy being back in her program, that I can relax because I know she's taking care of Cinder and will help come up with solutions for our problems, that I feel 20 pounds lighter and my anxiety has dropped 100%. So good job me, taking a compliment and turning it awkward. But I am really happy to be back at SF and in A's program. I just wish I had done it sooner.

It's been a long while since I've seen a barn tour on the blogosphere and now that Cinder is up at SF full time, I figured why not.

Cinder hauled up much better this time; no trying to kick her way out of the trailer. I chucked her in her stall while I unloaded the trailer and A finished teaching a lesson, then tacked Cin up and A hopped on. Cinder had been a little off last Thursday (the day before the move) and I of course spiraled and was convinced she was going to be lame forever, but thankfully she only took a couple of off steps and A said she felt good, if not a little out of shape. I let her have Saturday off and rode by Sunday and Monday and she felt great, so fingers crossed whatever was going on Thursday was just a fluke.

The lower blue building is the indoor, with covered jump storage along the south side. There's also a viewing room with a kitchen and an uncovered viewing platform in the indoor. The middle blue building is the barn, which has two aisle with I think 20 stalls per aisle. It also has 4 tack rooms, three grooming stalls, two wash stalls with hot and cold water, grain room and a laundry room. The smallest blue building is the hay and shavings barn. Above that is the parking lot.