Reading: Rereading the Green Creek series by TJ Klune in prep for the final book's release in two weeks.
Watching: I tried watching The Boys season 2 but wasn't in the right head space. Enola Homes was good.
Craving: Sleep.
Obsessing: My new One K helmet and that I can swap out colors on it. But they don't have the rose gold, boo.
Needing: A new charging cord for my headphones. Mine is on its last legs and I keep forgetting to get a new one. Can't survive work without my headphones!
Wanting: Time off from work.
Trying:  To keep my cool at work and not go postal on my coworker. Again.
Drinking:  Coffee and cider
Feeling: Excited. I have pony plans this weekend and then next weekend I'm flying down to SD to help move my parents up here.
Hoping: My parents don't kill each other in the next 9 days before the move and that things go smoothly.
Listening: Spotify
Clicking: Blogs to read
Posted by outofashes at 7:09 AM 2 comments:

Between the fires, hazardous air quality, Peebs colicking, and general anxiety I might have done a little retail therapy. I mean, why not buy stuff you only use when riding when you can't ride for a couple of weeks? Gotta get that serotonin hit from something.

The barn I bought Peebs from is closing and was selling off pretty much everything not nailed down. They had jumps for sale, and while we don't need more standards or poles, we could use fill. Unfortunately they wanted to sell the jumps as a set, but had some extra flower boxes I snagged. The brown ones each need a board replaced, while the yellow and white ones just need some cleaning and a new coat of paint.

I took advantage of the International Helmet Awareness weekend and bought a One K MIPS. I'm super happy that One K's now come in long oval and with the MIPS. While I don't need a new helmet, I'm sure Cinder is going to turn me into a lawn dart at some point and my Trauma Void is a smidge loose on my head. Much rather be out $$ for a new helmet than a brain injury.

I was going through my blankets and sheets and realized the only sheet I have for Peebs is his Back on Track one. I love it, but he doesn't always need it. Cinder thankfully still fits into last years blankets but will most likely need to size up next year. Peebs and Cinder currently wear the same size, and Peebs can also wear the size up depending on the blanket, so I decided to get a rain sheet in 78. It's a little big on Peebs, but will fit Cinder next year.

So when I saw a unicorn sheet at the feed store, I had to get it. Peebs has the matching unicorn fly sheet in white, but I really like the blue rain sheet. I'm slightly upset of the thought of him going outside and rolling in the mud in it. It's almost too cute to use.

Not Even Surprised Anymore

What would 2020 be without a colic scare? Because at this point I've accepted that anything can and will happen.

So last Thursday we got thunderstorms. We desperately needed the rain, and it helped clear out the wildfire smoke so we can start rehabbing, but we also got a shit ton of thunder and lightning. Like almost nonstop for close to an hour around 1am on Friday morning. It also rained off and on for most of Friday. At TCF the ponies were still turned out and we brought them in Friday night around 5. Peebs was tucked into his stall with freshly cleaned and filled water buckets, hay, and his hay pellet grain.

A's mom called me around 9:30 Saturday morning saying she had turned Peebs back out at 8 with his hay and grain in his paddock but he hadn't eaten anything and was down. Peebs is a vacuum and him not eating is a big sign. I ran out to the barn, gave him banamine, called my vet, and brought him back inside so we could monitor him a little better.  When I brought him in, I noticed his water buckets were still full. He hadn't had anything to drink from 5pm Friday night to 8am Saturday morning when he drank from the paddock trough. We were obviously dealing with some dehydration and impaction. 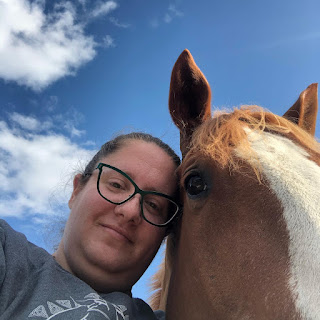 Vet gave me the ok to hand walk/graze him and offer small amounts of soaked hay. Peebs did eat and around 2:30 passed some normal looking poop. But around 6:30 he went down again. At first I wasn't too worried since it looked like he took a 20min power nap, but then he sat up, started biting at his stomach and rolled twice. Called vet again and was told to take him into the hospital. As I was hooking up the trailer, he did pass a little more manure but I had already called and told the hospital we were coming, so off we went.

Once again, I had to hand him off to a tech and sit in my truck waiting to hear from the vet. About an hour and a half later the vet walked out to talk to me. Back in May the vet called me from inside the hospital to talk about Peebs, so this time I was sure he had died and she didn't want to deliver the news over the phone. But it turns out this vet has much better bedside truckside manners than the one we saw in May. Peebs wasn't showing any symptoms, his vitals and blood work were all normal, and she couldn't feel anything other than some soft manure on the rectal exam. Most likely, the poop he passed right before heading off to the hospital was the impaction. They did tube him with some water and Epsom salts and they did want to keep him overnight to observe him. I was more than fine with that, since I probably would have been sleeping in the tack room if I took him back to barn.

They called me at 10 on Sunday  morning to report that Peebs had passed a bunch of manure during the night, and was happily eating hay. Their protocol is to keep them for 24hrs for observation so I could pick him up between 6-7 that night. Peebs was very happy when they walked him out of the hospital and jumped right into the trailer to go home. I turned him back out in his paddock since I didn't want to chance him not drinking if he was inside. He ate dinner Sunday night and both meals yesterday completely normally so *knock wood* he's in the clear. We do have an appointment Friday for his fall shots and I'm going to ask my vet to do a quick basic exam on him just for my sanity.

Wake Me Up When September Ends

While 2020 has been fucking awful, I had been able to mostly stay optimistic and not let anxiety, dread, and depression get to me too much. But this past week has broken me. A very close family friend passed away (not COVID and he had a lot of medical issues so not completely unexpected) and then the apocalypse hit Oregon.

The forecast was for hot, dry, windy conditions. The winds were coming out of the east and the National Weather Service said we were going to have the Oregon version of SoCal's Santa Ana winds. I grew up in San Diego and know first hand how awful and deadly Santa Anas can be. We were under red flag warnings and critical fire dangers. This was only the second time that the fire danger has been this high in this part of the state.

Monday was when things were supposed to start getting really bad. I went to the barn and rode in the morning (and yelled at the jackass next door mowing the dry as a bone overgrown field next to us) then hunkered down at home. Around 5:30 I got up to feed the cats and make a little dinner then went back to Netflix. About a half hour later I get a strong smell of smoke and run outside to see what was going on. The winds had shifted and picked up, and we were getting all the smoke from the fires. It was so bad you could taste it.

More fires started up Monday night and Tuesday morning it felt like the apocalypse was starting. The air was pure smoke and ash, so bad I had to wear goggles while feeding our alpacas at work. Evacuation notices were popping up on my phone left and right and A’s mom called to see if a friend could use my horse trailer to evacuate their ponies. Thankfully everything was far enough away from us that I only felt mild panic. We busted ass at work and got the week’s critical work done on Tuesday just in case.

Tuesday afternoon I did decide to leave my truck hooked up to the trailer, just in case. I wasn’t worried about Peebs, but Cinder’s barn is in the middle of the forest on a small one lane road up a hill. If a new fire was to start, evacuating that barn was going to be hard. Trainer S did contact me saying she has put labels on all the halters with her phone number as well as the owner’s number and that all the horses were not getting worked and just light hand walking. I seriously debated bringing Cinder home so both of my ponies were in the same place, but decided against that. First Cinder would be all worked up and the boys at TCF would get excited with her back. No one needs to be worked up right now. Second, if we did need to leave TCF having one more horse there didn’t make sense. Especially since we have the two evacuee ponies.

Wednesday was the same as Tuesday with the fires still raging out of control and more and more of the state being evacuated. Last I saw some 500,000+ people have been evacuated, about 10-12% of the state’s population. Entire towns and communities are gone. Multiple barns evacuated and then had to evacuate again. The university I work for shut down early on Wednesday (and is still shut down) because the air quality was so awful multiple buildings on campus had their fire alarms going off. I’m essential staff so I went in on Thursday to check animals and then left. My manager had me stay home Friday.
Thankfully the winds have died down and shifted, and the temperature has dropped. It looks like the fire crews are starting to get a handle on the fires, as there aren’t as many evacuation notices popping up. It is supposed to rain next week and I’m crossing every crossable and doing rain dances. After pretty much not leaving my bed on Friday I’m feeling less anxious and strung out, but the threat won’t be over till the rains start in earnest in October/November. My plea to you dear reader is this, listen to scientists about climate change, and vote for officials that do the same.

Where the fudge has time gone? How is it September already??