What's in a Name

I'm on day 10 of 12 working in a row....and the last few days have been ROUGH.  Like we normally have 7 people but have been down to 3 or 4.  Mentally and physically I'm fried so, for funsies I'm asking for help on picking a show name for Cinder.

Her sire is Chancellor (Rogue for a barn name) and dam is Brenna (Abby/barn name) by Buenos Aires. Doesn't give me a whole lot to work with.  Of note, Brenna's grandsire, Bolero, was the founding sire of the B-line Hanoverians and the grandsire of Brentina.

I'm thinking something fire related to play off of Cinder, or maybe something in Spanish as a thanks to my parents (who live in Mexico) for helping me get her?  Currently I'm liking Sparks Fly, but my uncle's nickname is Spark and I don't really get along with him that well as he's THAT uncle at family gatherings. 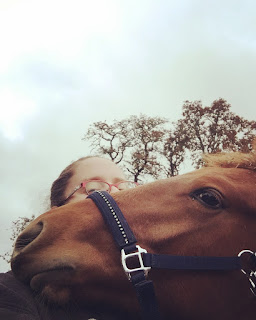 So interwebs, help a girl out.  Anyone got any suggestions??

The past few weeks have been pretty good in terms of ponies.  Peebs' has been awesome over fences, minus one day when we attempted bounces, and I've feel like we've really figured each other out and have become a pretty good team.

Over the summer I had set up a couple gymnastics for Peebs, all one strides.  He was a champ going through them so when I set up one with a bounce to a one I didn't think anything of it. We started cross rail bounce to a pole and he seemed ok with it.  I made the pole a cross rail and while it rode a bit long he seemed to get the idea.  I shortened the bounce and it went fine.  I then put the second cross rail up to a vertical and all hell brook loose.  The bounce suddenly seemed super long and Peebs knocked the vertical with his hind end.  So I shortened it again.  Then he tried to put a one in the bounce, a few times.  My life might have flashed before my eyes when the one stride put us almost on top of the vertical.  But God bless him, Peebs never once felt like he was going to stop, or run out.  Every time he somehow managed to get over the vertical without pulling the rail or killing us. We finally managed to bounce the bounce and I quit with that.  I'm hoping to work on bounces in lessons over the winter to see if we can figure them out.

That ride over the bounce really cemented that Peebs is a trier, and will do his best to take care of me.  Phoenix would have stopped, and Buddy probably would have just gone through the vertical, if they were in that situation.  But even with some truly awful distances and take off spots, Peebs was rock solid and I felt completely safe with him.  The old me would have been in tears and would have given up. But with Peebs I was laughing and making jokes about it.  We had a lesson the week after and while we didn't have any bounces, we did have some bad distances.  And again, I felt 100% ok with it and Peebs took everything in stride..haha! Bend the bending line too much and end up at 4.75 strides?  Ok.  Don't hold enough in the outside line and get 5.5 instead of 6?  Whatever.  Seriously, this horse is worth his weight in gold!

A couple months ago my farrier (whose work I like, but as a person, not so much) made a comment about how much I paid for Peebs.  Basically he thought I got robbed and paid way too much for him.  And maybe in other people's minds I did over pay.  But to me, Peebs is priceless.  These past couple of weeks have only cemented that fact. I will happily pay more for a horse with a great brain who tries his heart out.  And as my trainer said in my last lesson, put a flying change on him and some 2'6" show miles, and I could list him at double what I paid.  But I'm pretty sure Peebs is with me to stay, forever.