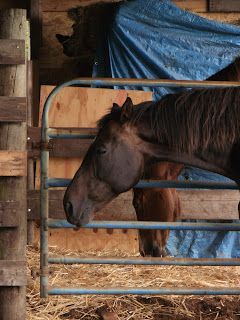 I'm originally from San Diego, but moved up to Oregon for college.  I was leasing a horse my senior year of high school, then leased another during my freshman year and rode on my school's hunter/jumper team.  The summer between my freshman and sophomore year (2005)  I went back to San Diego and was catch riding for my trainer.  Phoenix came in for training and to be sold and I started working with him. He hadn't been in work for a while, and was way of out shape.

I had never really worked with a green horse before, and while Phoenix had training on him it had been years since he was in any formal work.  He was very crooked; as in we couldn't walk, let alone trot or canter, in a straight line to save our lives.  The first few times we jumped him, he would twist his body and jump the fence almost parallel to it.  In spite of that, I fell in love with him that summer and convinced my parents, and his owner, to let me lease him for a year and take him to Oregon with me.  Nine months into the lease I bought him. 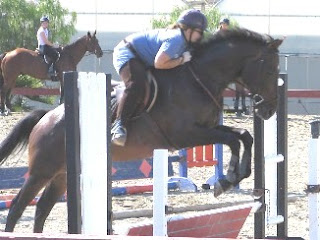 He was such a challenge, and I have some of my lowest points with him, but he is my heart horse.  He tries so hard, and is such a lover that I couldn't imagine not having him in my life.  We've shown from long stirrup thru 3'ft jumpers, and he'll jump anything you put in front of him. He's carted my trainer's daughter around when she was only 5.

Over the years we've battled some hoof/coffin joint issues with him.  He was bruising the inside heel of his right front, but was never really lame on it.  He toes out on that leg, putting more pressure on the inside.  He actually has very nice feet for a TB, except for the bruising.  He was put in bar shoes with wedge pads in 2008 to correct the angle of coffin joint.  He was also started on Adequan, and we had the joint injected.  In March 2010, he came up lame again.  Another joint injection didn't do the trick, so we took new x-rays.  They weren't pretty.  It showed more arthritis in the joint, but also side bone.  The inside of his pasture had thickened, and over the years built up bone similar to ring bone.  In August 2010 he was semi-retried into walk/trot only with the occasional canter.  In Feb. 2011 I moved him to my trainer's pasture to keep her mare company.  He thoroughly enjoyed  his new life of leisure.

In March 2012, after my trainer's mare has to be put down, I moved Phoenix back to the barn and started riding him again.  He was a lot sounder than he was before his year vacation, but still not 100%.  He was leased out to a wonderful 14yr old to use for 4H.  He packed her around all day, and put up with everything 4H throws at him. After only being together for 4 months, they earned blues in English Eq., Western Eq, and dressage at the local county fair.  Phoenix packed her around first few crossrails courses and her first verticals.

Phoenix and Anna had almost 3yrs together before his sidebone reared its ugly head again, and he was retired for real this time in spring of 2014. On November 17, 2015 I had to make the hardest decision ever and put Phoenix down due to colic.