The theme of my last two lessons has been bouncy. Both in the sense of keeping Cinder more packaged and bouncy in her gaits, and in that we jumped our first actual bounces.

The big h/j program at the barn uses their jumps in the arena, while most of A's are out in the XC field. So pretty much whatever the h/j trainer sets is what we jump inside. They get pissy if we move the jumps, or even change fence heights without resetting them sometimes. While I am allowed to jump outside of lessons, I usually don't because of this. If there's trot or canter poles set up I'll do those.

Last week they had reset the course and had a line of five bounces set up on one long side. They also had three sets of raised trot poles, a couple cavalleti and a couple single fences set up. I told A the bounces looked like fun, but Cinder had never done a bounce before. She's done one and two strides, and bounce poles, but not bounce jumps. A started taking the bounces down while I warmed up on the flat, having me incorporate the trot poles. The poles were set slightly short, and the goal was to keep Cinder more packaged then normal to make the poles work. Tracking left was pretty easy, but I had a much harder time tracking right. It doesn't help that Cinder doesn't care about hitting the poles so pretty much every time through she ticked a rail. 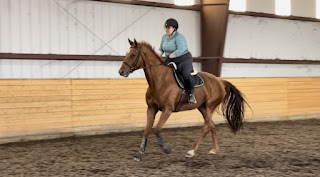 We started jumping by trotting the cavalleti, which were place on a short diagonal heading towards/away from the line of bounces on a bending line. We then picked up the line separately, which A had made just one bounce to start with. Cinder was pretty confused about what to do in the bounce and pretty much just trotted through it. The more times we went through the line, and I rode her a little more forward and confidently, she figured it out. A kept them small (see above) but added in the third cross rail. It was a fun lesson and I was glad I had the nerve to tackle the bounces.

The jumps hadn't moved by my Monday lesson, so we started again with the trot poles for our flat warm up and then A had me start figure eighting some of the single fences and cavalleti. Cinder looked hard at some ground rails before one of the fences and I accidentally caught her in the mouth, but god bless her she didn't care. I get worried that my mistakes are going to piss her off, or ruin her, but honestly this horse doesn't give a shit and doesn't know how to hold a grudge. I need to keep reminding myself of that.

We then moved onto the line five bounces, which A had set tiny again. Coming in Cinder backed way off and seemed worried about all the poles. I didn't push her forward and we kinda stalled out over the third cross rail. A had me pull her out of the line and try again. This time I actually rode and kept my leg on, and while still a little nervous Cinder went through all five bounces. She then figured it out and the third time through was easy. We went through the line a couple time each way before calling it quits.

Most of the jumps set up in area at Cinder's barn are owned by IL, the big h/j program. Trainer A's jumps are mostly out in the XC field, some are used in the indoor. IL is fine with A using their jumps (mostly) just as long as she doesn't move them around. Basically whatever they set up is what is jumped that week.

They had their liverpool out the past few weeks and when A jumped Cinder she decided to take her over it. Cinder has jumped it before, back in the spring, with no issue, but gave it a hard look and stopped at it this week. A got her over it on the second try and said it wasn't a naughty stop, Cin just had to really check it out. A went on to say that the liverpool was set a bit in front of the vertical, and it was a great practice for ditch and wall jumps on XC.

I said that sounded odd, most jumpers don't set the liverpool in front of the fence, they set it behind on the landing side to draw the horse's eye down and away. A and I stared at each other for a minute, then started laughing because she had been jumping the fence backwards. A said she was glad no one from IL was around when she was jumping horses that day because they would have thought she was more insane that they already do.

The temps are still warm during the day here in the PNW, but it's definitely spooky season. The mornings are crisp and foggy, and the ponies have been feeling good. In fact A messaged me last week asking if I had ridden Cinder Sunday and Monday like I normally do (I had lunged her Sunday and had a good ride Monday) because apparently Cinder thought she was a baby OTTB instead of a baby warmblood during her trainer ride on Tuesday and had been quite full of herself. They had to gallop a many laps of the arena before Cinder's brain started working correctly.

Cinder was pretty well behaved in our lesson on Friday; I was the one having a case of the spooky scaries. We warmed up on the flat pretty well, and then started jumping a few single cross rails, looping around the arena and picking them up as we went along. A started lowering some of the other jumps, and inadvertently spooked another horse who was hacking in the ring with us. He apparently spooks frequently when poles hit the ground and A had taken the back rail of an oxer off. I was taking a walk break and the other horse was directly in front of us when he spooked, then slipped, then bucked and dumped his rider. He started trotting towards us and Cinder grew about three inches wider and taller and I flung myself off just in case she got any stupid ideas. Thankfully she didn't, and A was able to catch the gelding and his rider was ok minus some road rash on her arm. But I was rattled and it followed us the rest of the ride.

We rewarmed up over the cross rails before attempting an outside line. A said it was a short 6 or forward 5 and she didn't care what I did. I tried the short 6 at first, but ended up a 5.5 so I decided the forward 5 was a better choice. We did the five nicely going off the left, but going off the right I had a hard time finding it. Then Cinder spooked a little at one of the barn workers pushing a wheelbarrow and while it wasn't a big spook, I let it get to me. I couldn't push her forward enough down the line and kept finding either a horrible chip to the second fence, or would pull for the 6 and Cinder would break to the trot. Eventually I asked A if I could just trot everything to get my brain back. She was fine with that so I picked up the outside line and the single cross rails until I felt a bit more confident. We ended with trotting in and cantering out of the line in a 6.

I'm annoyed with myself for letting the spooks get to me, but we've been focusing on flat work and haven't jumped for a month and I know I'm always rusty with a long break. I am however really happy with Cinder. She packs me around while I'm having an anxiety attack over finding a distance to a 2' fence like she's a 20yr old school horse, not a green 5yr old. I'm going to try and fit in a second lesson per week for a while because we have our last show of the season at the end of the month, and then hopefully a really cool clinic in December.

Trainer A rides with an event trainer (NM) who's based south of Seattle, about two hours north of our barn. NM is part of the Woodbrook Hunt Club, who hosts drag hunts on Joint Base Lewis McChord and hosts a yearly Hunter Pace and Trials. A has gone up on a couple of hunts, but hasn't done the pace till this year. She decided to go at the last minute, and I tagged along as her groom. Both her and I were a little sad we didn't bring Cinder as A could have totally shown her in it this year, but we're for sure planning on bringing her next year.

A had entered the hunter pace with two of NM's junior students who needed an adult chaperone. They were entered in the first flight division, and won. I didn't get to see any of it, but A said they hauled ass and had a blast, but next year she'll take me out in the hilltopper division and we can calmly walk/trot the whole thing. I told her I appreciated that, as I'd rather not die galloping across a military base.

For the hunter trials, they had a big (dead) grass field with mainly natural style jumps. There were a couple rustic wooden rail fences, but a lot brush, straw bales, and log piles. They also had a bank that was used in some classes. They had a couple 2'6-3' hunter derby classes, hunter hack classes, a family class, a pairs over fences class, and a memorial field hunter classic. We watched some of the derbies and the hunter hack and it looked so fun.

A was entered in the memorial field hunter classic, course map above. Unfortunately she got a little screwed during her round, as a loose dog ran into the field and she turned left of a jump instead of right to avoid him and had to circle. I know the judge had to count the circle as a refusal, but it shouldn't have counted as she was trying to not run over a dog. She then got a little lost trying to find her way through the trees to move the branch (everyone else did a schooling round so they knew where it was). There were 8 in the class but they only placed to 7th and she ended up not ribboning.

Everyone dressed up for the hunter trial classes, some in full hunting gear. It was such a fun atmosphere and we had a great day. Can't wait to go back next year. And who knows, maybe I'll let A talk me into joining a hunt one day.