Things, for the most part, have been going really, really well.  If you follow me on IG or FB you've seen our last show results, but if not: Peebs is a boss.  We went and did a two day USHJA Outreach show and came home with champion in our hunter division, reserve champion in our equitation division, and I won the USHJA Outreach Bronze medal, my first medal class win. I just got a ribbon for the win, not an actual medal which I'm slightly pissed about.  My inner 12yr old wants that medal!


After our last show in April, Peebs and I had a little down time that involved me going to see my parents, and him getting his teeth done.  When we went back to work we focused mainly on flat work; really getting him in front of my leg and unlocking his neck. He tends to hold tension in his neck, and won't bend.  To really get him loose and bendy, I have to think about flexing his neck and making it soft. I also focused on not holding on for dear life with my inside hand.  We did some small cross rails and ground poles, not really putting anything together but only picking up jumps/poles when he felt connected and forward.  It was very clear when he wasn't, as I couldn't see a distance or what I did see was crappy. When he was on my aids everything just flowed so well. 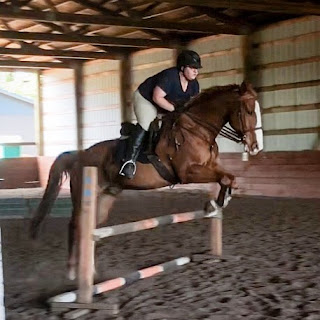 Our first real jumping lesson back from the April show was awesome.  We did a little course and I was actually able to work on things like holding him out in the bending line, and waiting with impulsion to a short distance.  It was like a switch had been flipped and all of a sudden we could go do the thing. Even when I saw a bad spot, or didn't see anything, I could sit up and add leg and not worry that he'd stop or we'd crash. For me, that's huge.  It's been a very long time since I've felt like that. I even asked my trainer to put the jumps up!

The show last weekend was a culmination of everything we've been working on.  I had a plan for our warm-up, the jumps looked tiny (they were 2' which I know is tiny but I guess I underestimated how high we've been schooling lately) and, most importantly, I felt confident and relaxed.  Which I wasn't expecting, as I was by myself.  My trainer was out of town so I was flying solo at the show.  So to come home with a champion, a reserve, and a medal win was way beyond my expectations.  My only real expectation was to have nice, flowing rounds and to try and remember what we've been working on at home.  That's not to say we were completely flawless.  I still saw a couple super long distances that Peeb's rightly decided not to take. I cut a corner in our first eq round and Peebs decided he was really tired in our second eq round and trotted coming out of the turn to the diagonal line. We also cantered when we were supposed to be trotting in the under saddle. But I consider these to fairly minor issues, and nothing that we can't work on.

My original show plan for the year was to skip this show series July show and do their August one, but the horse show bug bit me hard and I decided to do one of the days in July.  They're doing series champion awards this year, and while I don't normally consider myself a point chaser, I'm currently the leader for our hunter division and I want those points! I've never been a contender for a champ or reserve year end award and I really, really want to go for it. I can financially swing it, my confidence in my horse and my riding is at an all time high, and my horse is awesome. Why not go for it?
Posted by outofashes at 11:38 AM 3 comments: