Every Chapter Has to End

But that means a new chapter starts, right?  Let's just say things didn't go so great with trying to block out my arena time with the new western trainer at the barn.  In fact it went so awful that after 11 years of boarding there, I'm moving out. I'm still not ok with how things went down, and the aftermath, but I'm excited to move to our new barn next weekend.


The New Barn is owned by the girl that took McKenna, so for those that remember her, I'm sure I'll have updates on her. MG, McKenna's owner, just got a weanling filly that's the same age as Cinder, so we can have baby play time! She also has another mare due to foal this summer.

New Barn is small; MG has her three mares and the baby, and right now there are two other boarders that each have two horses.  They're building more stalls, so there might be a couple more new people, but not many. One of the boarders is a dressage trainer, BS, who I know (how MG found McKenna) and like. Right now BS gives three lessons a week out there, so there's plenty of arena time.  And it sounds like they're ok with me bringing my trainer in for lessons, which is awesome. I was going to haul out to another small barn (that doesn't have any openings, damn it!) that my trainer teaches at if I couldn't bring her in. 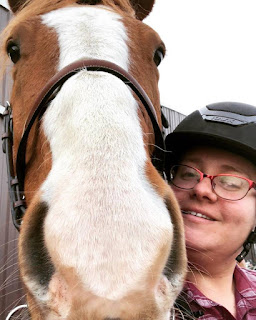 The only downsides of New Barn is that it's way way more expensive than what I've been paying and its farther from home. It's full care and I've been on self care.  I won't have to buy bedding or hay, and I won't have to clean stalls.  That means, if I'm sick, or on vacation, or flat just don't want to go to the barn on a given day, I don't have to. My mom, who's the BEST MOM EVER!!!!!!, was so upset and disgusted with Old Barn drama, has offered to help me cover the expense.