I got her a hybrid halter and have started doing more ground work with her.  She wasn't bad, per se, but if she did get naughty, I didn't have much control with either the regular halter or rope halter I had.  And I couldn't find a stud chain small enough for her regular halter.  So the hybrid halter with knots was perfect.  She's learned how to pick up her feet while in the cross ties and that holding her hind feet up for more than 10 seconds won't kill her.  The ponies got their feet done last week and she got a "much improved" from the farrier. I've also started working with her and the clippers again and have pulled a little bit of her mane.  She was pretty sure that was the end of the world until I stuffed her face with cookies.  Then it was tolerable. 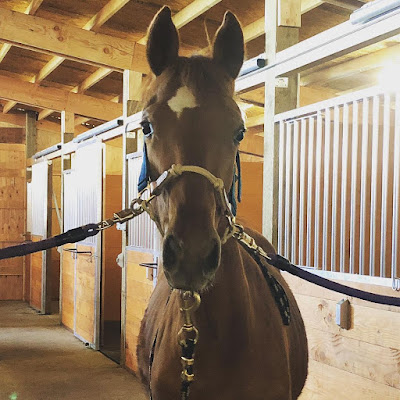 Peebs has made new friends (but that's not something new).  We've been turning him out to play with Helix, a 7yr old mustang.  Both boys tend to play hard, so there was some concern about them inflicting serious bodily harm on each other, but so far so good. Helix likes to be alpha, but Peebs doesn't really care as long as he can chew on his buddy. Helix seems fine with it, but will occasionally rear and strike at Peebs, who doesn't give a shit.  I wanted to start putting my ponies out with other horses so they don't become too attached to each other.  They were the only horses in the barn for a couple of weeks while everything was getting finished, and I was afraid of them getting too attached to each other. It doesn't seem like that's happened, thank god! No clingy herd bound ponies for me! 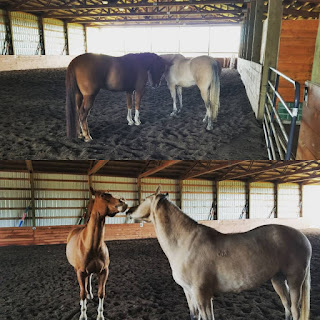 I've also learned that riding in a flat arena is awesome!  Old barn's outdoor was on a bit of a slope for drainage, and I didn't really realize how much it affected my riding.  You were constantly going either uphill or downhill and now that I'm on a flat arena it's so much easier to find the right balance with Peebs.  When we used to jump, we pretty much always did lines going uphill, so only in one direction, and now we're going back and forth in the lines and can school a lot more. And when Peebs gets strung out and heavy on the forehand, it doesn't feel like he's going to fall on his face going downhill, because there is no downhill!  I love it!
Posted by outofashes at 8:00 AM