Pride Goeth Before I Fall

After owning him for 5 years and 11 months, Peebs finally dumped me last Friday. To be fair, it wasn't his fault at all. I'm sore, but no permanent damage and thankfully Peebs just stood there while I crawled around on the ground trying to find my glasses and phone that went flying.

So, to set the scene, I had gotten off work at noon last Friday for a doctor's appointment. I was slightly worried going into it, but got really good news so I was in a great mood heading out to the barn. I pulled Cinder out first, lunged her lightly, then hopped on. We've been working over ground poles lately, mainly so I can get comfortable with her canter and train my eye to her much larger than Peebs' stride.

She was being super good, so I was brave and set a cross rail. I've only trotted her over two jumps outside of lessons, so this is a big deal for me. We also hadn't jumped in almost three weeks, since the show on Halloween. But being the good girl that she is, Cinder didn't act like she hadn't jumped in three weeks and our canter to the cross rail was the exact same as it was to the ground pole. While not every approach was perfect, hello drifting to the outside tracking right and dropping her inside shoulder going left, I was able to fix our issues and had reasonably good distances every time. I was able to see those distances as well, which is a huge win in my book. So I was on a huge high ending the ride on her, and moving onto Peebs.

Despite landing on my left side, my right hip/butt has been hurting worse. All weekend it felt like there was a flaming rock in the middle of my right butt cheek. I did manage to make it to work this week, and got back into the saddle (I am riding Peebs with a saddle from now on) last night. I still don't feel 100%, so Cinder is getting time off till I do. She might be a very good baby, but she's still a baby.

Ugh, I'm so behind in posting about Peebs. But there's really not a lot to say. His suspensory is healing, but slowly. We did get cleared for walking under saddle, and are currently up to 23 minutes loose rein walk and 7 minutes of a forward, on contact walk. We go back in two weeks to reultrasound and hopefully will get cleared to start trotting.

Peebs got his first acupuncture session two weeks ago. The new vet at our clinic, who has handled most of Peebs' rehab does it and while I was a bit skeptical, I think it's helped. Peebs took a nice nap during the session, which was great considering he lost his damn mind when we got to the clinic because there were sheep in the field next door. If nothing else, the acupuncture sure relaxed him and helped overcome his sheep induced neurosis.  We're going to do another session in a few weeks, after his next ultrasound.

Major shout out to Impulsion Images! She took some amazing pics at the show and only charged $35 for the digital download for all the pics. And she took 59 of Cinder, between A and I. I wish she was the show photographer for all my shows! Don't worry, I won't make you see all 59, just some of my favorites. All images below bought from her.

Our last show of the year was Sunday, the last in the same series as the September show. This time I and Trainer A were riding Cinder, me in the cross rails and A in the 0.60m. The venue changed, as the facility the September show was held at was sold to become a boat storage facility (which I guess is better than a housing development but still sucks) and we lucked out with good weather for the outdoor arena at the new location.

I had found a Halloween themed saddle pad/bonnet combo on Etsy, so Cinder and I were going as the great pumpkin. The bonnet ended up being super small and I could barley stuff Cinder's ears into them. Wearing black breeches and a long sleeved t-shirt to show in did make my inner hunter princess a little twitchy, but my inner 10yr old was happy so it was win. 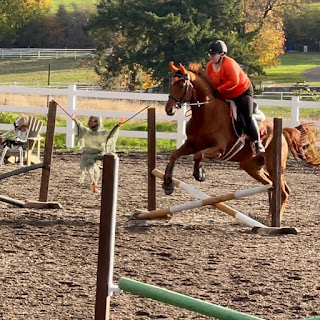 They had some spooky jump decorations including a skeleton with horse head and swinging ghoul. Cinder took a brief look at the horse head guy, but was very good while A warmed her up. I got on and while she felt more jazzed than she normally does we had a decent warm up. I just tried to focus on being relaxed and going with her over the fences. I could feel her switch into ammy mode once she realized I wasn't asking for as much as A had been. She stood quietly at the back gate while we waited our turn and didn't even care when another horse tried to back up into us to avoid going in the ring.

I expected to be nervous heading in for our first round, but I wasn't. I knew Cinder is more than capable of trotting a course of cross rails, and I'm a decent enough rider to get her around. I was mostly still marveling at how we're actually at the point where we can show, under saddle, together. Anything else was icing on the cake!

Cinder listened perfectly, came back when I asked, turned when I asked, took a couple crazy angled fences for our speed round, and honestly felt so much older and more experienced than she is. We did have a rail in our first round (I think she got a little lazy), and in our third round I turned too sharply and aimed at the standard so I circled to re-approach, so we ended up with a second, third, and fourth for our efforts.

A then got back on her and schooled her lightly during the break before the 0.60m. A's also had another student showing in that division and Cinder was happy to stand in the ring while A coached from her back. A was doing two classes, and unfortunately had the same fence down in both. The first time she cut the turn a little tight and Cinder had to leap long at the fence, and the second time A held her out a bit too much and caught the outside standard with her foot. They earned fourths for both of their efforts.

We had only showed at two of the four shows in this series, but they only held the cross rail classes at those two shows, so Cinder earned herself her first series champion! We won a handmade ceramic mug, a big ass ribbon, and a handful of peppermint candy for Cinder. No better way to end our show season!