Well Peebs' summer break is over and it's back to work.  The chiro came out and said his hips were good, but his neck and poll were out again.  Pretty sure his neck will always be wonky; its where he likes to hold tension and his under neck muscles are super developed.  She did complement me on how much his top line has grown but it will always be a battle to keep his neck from being upside down.

I also got his hind shoes put on, but I'm thinking that probably wasn't necessary. I haven't noticed a difference in the week or so that he's had them. But we've mostly been doing flat work so we'll see once we start jumping a bit more. If I still don't notice anything we'll pull them.

Our first few rides back were rough.  I wasn't trusting him to not be crazy after almost a month off so I was holding his face too much and was too handsy.  I finally set out a bunch of ground poles one day and just trotted and cantered them while repeating to myself "Don't touch his mouth!!" And what do you know, he was pretty good.  I had set some of the trot poles a bit short and he completely biffed it the first time and even though I wanted to do some major half halting coming in the second time I didn't and let him figure it out.  Which he did fine on his own. He's got a good eye and is smart so I need to trust him to figure out the distance a bit more. Its hard because McKenna just wanted to run and jump ALL THE THINGS while Buddy didn't give a crap about ground poles and would fall all over them.


The day after our pole extravaganza I added three trot poles before a pile of poles that became a cross rail, then a vertical, then a bigger vertical. I wanted to set a gymnastic but was too lazy. Again, I had set the trot poles short, actually too short, but Peebs made it work. I just focused on getting him in straight (didn't always happen) and my body over the fence. He was great so we quite after a few goes. I'm going to try and set up a gymnastic today or tomorrow to play with.  And hopefully next week we can get back into regular lessons.  I haven't had one since the show 6 weeks ago! 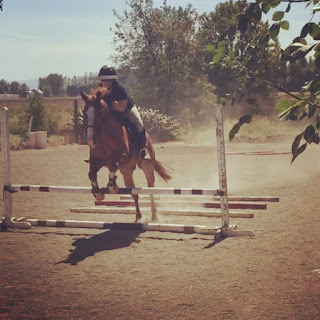