Nothing like shopping for pony supplies to make you feel better! Both Buddy and McKenna have ripped holes and leg straps off their blankets in the past month.  Buddy caught his on his water bucket ruining the bucket in the process as well.  I think my barn owner can repair it, but I'm hesitant to have her do it or get him a new one since he'll more than likely be sold this summer.  If I do have the blanket fixed I'm pretty sure it will fit Phoenix so he'll have a back up medium weight. 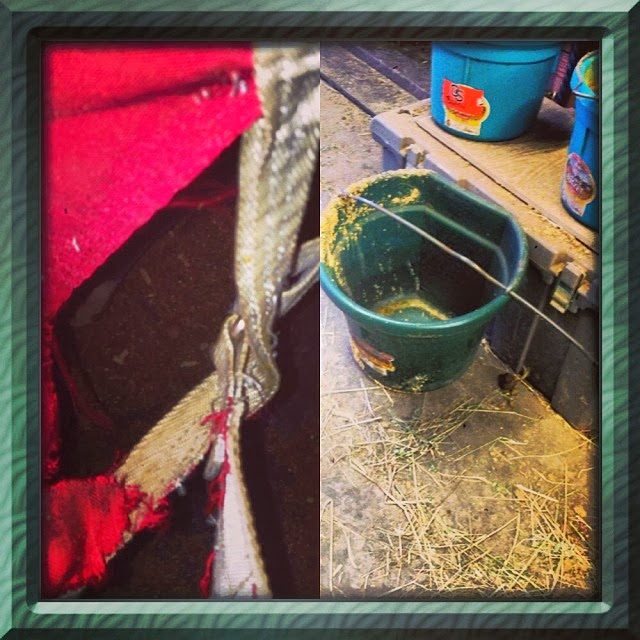 McKenna's blanket was an old stable blanket that my barn owner gave me, so I don't feet too bad that she's ripped it up.  I have a feeling she's going to be pretty hard on blankets so I think she'll do better with a tougher turnout blanket vs a stable blanket.  SmartPak was having a sale a couple weeks ago and their SmartPink turnout caught my eye.  It was on sale for $50 off list price so I bit the bullet and ordered it.  It came today and while it's just barley too warm for her to wear it now I tried it on before putting it away till (hopefully) next winter.
My second piece of retail therapy is still on order, but hopefully should be getting to me in the next couple of weeks.  Tack of the Day had Tredstep da Vinci field boots on sale last week for $199.  Normally those are $489 and since my 8yr old tall boots have started to die (my mom got the zipper replaced in the broken boot but there's something wedged in the bottom of the heel and it looks and walks a bit funny) I couldn't say no. According to the size chart they should fit, but if not I'll put them up on a couple local Facebook groups/Ebay and at least get what I paid for them then start the boot search all over.
Posted by outofashes at 7:39 PM 4 comments:

Adding to my dreary mood the weather over the past month has been nasty.  We got 17in of snow, and since my truck is still not fixed, I got snowed in for 3 days because my car couldn't make it out of the driveway.  After that we've gotten a few inches of rain and some strong winds, not very nice riding weather.  But now that I'm getting back into a more manageable routine and being able/wanting to ride my horses the weather has decided to cooperate.


It was warm and sunny yesterday, and since I haven't jumped Buddy in three weeks since the clinic, I set some fences out.  Just 4, an x to warm up with, two diagonal verticals and an outside square oxer.  He had been strong, forward, and opinionated during our flat ride on Friday, and I figured he was bored and wanted something more to do.

He was awesome jumping!  Not too strong, but forward and willing to go wherever I pointed.  We schooled some bending lines and once I remembered to not open my left rein we nailed everything.  We had been doing the outside oxer bending right to a diagonal but I couldn't get him to land on the right lead. My friend then yelled at me to not use that left rein and, like magic, we were able to land on the right lead and go to the second fence.  I just need someone to follow me around all the time telling me to not open the left rein.
Posted by outofashes at 11:06 AM No comments:

Over the past 6+ weeks, I've slowly burnt myself out at the barn.  My barn owner's left for their yearly trip to southern California for part of the winter, leaving me in charge.  This is the third or fourth year they've gone, but there's always been at least two or three of us sharing in barn management duties.  This year was the first year that I was the only one managing the place.  I was doing some extra stalls and feeding, but I did that in past years as well.

It got to the point where I was having weekly panic attacks/hysterical sobbing sessions.  I dreaded going out to the barn, especially during the busy afternoon hours where I would have to see/interact with everyone.  I'd pull up and see what whose cars were there and then plan how long I wanted/needed to stay and how best to work around who was there.  I did have to get after people, "No you can't ride that horse", "The fields are closed for winter riding/turnout", "Your board/lease payment is late",....you get the idea.  I hated doing so, it made me feel like a bitch, and I would get progressively madder as time went on.  Part of the reason I wasn't riding was because I know if I rode in a bad mood I'd take it out on my horse and that is in no way fair to them.

But my barn owner's have been back for a week, and already I feel so much better.  I've managed to ride McKenna three times in the last week and Buddy twice.  I think I only rode McKenna twice while they were gone, sorry mare!

She turned 6 on Valentine's Day and got a big hand full of peppermints.  She's surprised me with how good she's been under saddle for as little as I've done with her in the past 6wks. She had a lightbulb moment the other day when I was trying a baby leg yield to help soften and bend her.  Gave me a nice balanced trot, bending to the inside and holding a frame.
I free jumped McKenna again, and she was awesome.  Popped over everything, even up to 4'ish.  I had the fence up to the top of our standards, and she pretty much loped it.  She did kind of scare herself at that height and refused it the second time but once I put it back down to 3' she went over.  I just wish I had something better to take pics/videos than my phone.
Posted by outofashes at 6:58 PM 3 comments: