Saturday morning dawned bright and early, and I was at the barn by 7am to haul out to the show.  I had loaded 95% of my stuff Friday night, but had to grab Peeb's hay pellets and buckets and him. He loaded pretty well; he had to think about getting on for maybe 30 seconds before I smacked him with the end of the lead rope. I was somewhat worried that he and Cinder would be too attached and he'd scream for her once he realized she wasn't coming.  But he didn't.

I lucked out at the show and scored a stall in the barn instead of the portable stalls.  The barn had 16x16 stalls bedded deep versus the 10x10 canvas stalls on grass.  And their barn hand ended up cleaning my stall! Peebs settled in and immediately started eating his hay and didn't care about the automatic waterer.

I went to check the rings and realized we had gotten bumped from the outdoor ring to the indoor.  This show has two rings going on Saturday, with jumpers in morning followed by equitation classes from 2'-3'6" in the outdoor and the walk/trot to 18" classes inside.  They had so many entries (over 120 vs the 65 they had last year at their biggest show) that they had to move our 2' classes, and some of the other eq on the flat classes to the indoor. I was slightly pissed as the indoor is small and dark, making for tight turn and not so great pics, and the show photographer was only working the outdoor ring.  Because it's all about the media, right?

Peebs was perfect in warm-up.  Awake enough so that he was forward and moving, but not so much that he was hot or spooky.  It was a bit of a madhouse schooling, but once again, Peebs don't care. There was about 15 in our division, combined short/long stirrup, and they decided to split it and give two sets of ribbons.  I love it when shows do that.

Our first round was our best; we found nice distances and got all of our leads.  The only problems was I slightly misjudged the turn to the first fence, a single diagonal, so we were a bit crooked (they also used 8' long poles in the indoor and it through me off) and I got a 5 in the first outside line and 4 in the second.  They were set at about a 4.5 and my trainer said she didn't care what I did, as long as it was a whole number and I consistent. Oops. We never really found our groove in the second round and had a couple of chips and missed leads. The arena was so small it was hard to do a simple change and have enough space to get a good rhythm to the next fence.  And again I did a five and four in the lines. At least I'm consistent at not being consistent? We earned a 4th in the first round and a 5th in the second.  We ended the division with the flat which is not our strong suit but managed to eek out another 5th. 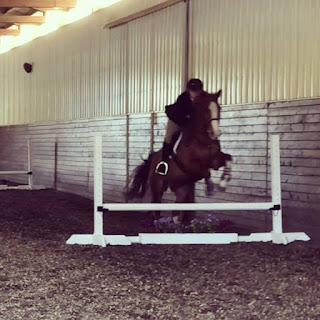 Our last round was the USHJA Outreach medal and it had a couple funky bending lines.  The last two fences were almost a boomerang.  The first half of the course was nice, but I got left behind at fence 6 and never recovered.  Peebs found the perfect distance but I thought he was going to chip in and was not expecting him to jump.  In perfect Peebs fashion, he didn't care and kept on going. He was slightly surprised to turn to the first fence in the boomerang line (a fence we had already jumped once going the other way)  and because of the narrow poles we missed and had to circle.  I decided to trot it to prepare both of us for the awkward turn, and it actually worked out pretty well. Needless to say, we didn't place in that class.


I untacked Peebs, cleaned him up, and headed to my hotel.  After I cleaned myself up and ate I went back to the show to feed him dinner and wrap.  It was about 6pm when I was finishing up, and they still had a couple of classes to go in the outdoor. I was just hoping Sunday wouldn't be as long.
Posted by outofashes at 1:07 PM