Last weekend one of the other training programs at Trainer A's barn was hosting a Julie Winkel clinic. Auditing was free, so I went up on Sunday (day 2 of the clinic) to watch. I knew Julie's name, knew she ran a big program out of Reno, was a rider, trainer, breeder, judge, and author, but really didn't know much else about her. I didn't have much expectations going into the day; I mainly wanted to watch ponies jump sticks and get a better feel of the barn before bringing Cinder up there next weekend.

I absolutely loved Julie's teaching style. I gained so much from watching the clinic, I'm kinda pissed I didn't watch both days of it. There were two groups, a 3' hunter/eq group and and a 3'6" jumper group. The 3' group went first and Julie explained so much about how the hunters and eq are judged, and how to ride them differently. Some of which I know (ride in a light seat at the canter in an under saddle vs a deep seat for an eq on the flat) and some that I didn't (why a two stride is numbered as separate fences in the hunters vs numbered as an A-B combo in the eq/jumpers. It's because a two stride is meant to represent jumping out of one field, cantering across a road, and jumping into another field out on a hunt. If your horse refused the second jump you wouldn't jump back into the first field and jump out again you would just re-approach the second jump).

Julie had the hunter/eq group do an eq course, complete with a test at the end including answering questions from the judge, and explained what she as a judge was looking for, what score she would give them and why she'd place one person over another. There were a couple jumpers in this group, and their horses wanted to get a bit hot and quick, but Julie was very complimentary on how the riders rode them and handled the horses. I was proud of myself for being able to answer most of the questions she asked, and being the only one to know where the wolf teeth are and why they should be removed. 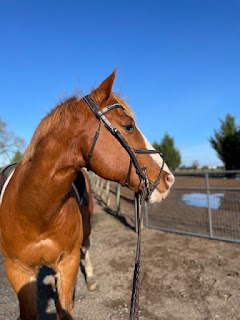 The jumper group ended up doing the same course as the eq group, but with the addition of a triple bar and one of the ramped oxers became a Swedish. For their warmup, Julie explained the different types of fences (vertical, ramped oxer, square oxer, Swedish) and how it affects the horses jump. I learned to not jump a Swedish square, but to jump it off center from the low end of the front rail so it becomes a ramped oxer.

My favorite part of the clinic though, was how Julie handled riders making mistakes. In the jumper group, the first fence of the course was the triple bar and one of the junior riders didn't make a decision cantering up to it and her horse stopped. Julie didn't get upset at the girl, just calmly explained that at 3'6"+  you can't be a passive rider and hope that your horse gets you out of a bad situation. You have to be an active rider, and make the decision, even if it's a bad one. Julie said she's much rather see a rider make a bad decision over sitting there like a sack of potatoes because it means they're thinking and trying to help the horse. That resonated with me.

Julie does clinic at some other barns in the Portland area and next time she's around I'm going to make it a priority to audit again. And maybe someday Cinder and I will take part in one.

The ponies' winter vacation is coming to an end. Peebs' ended a couple of weeks ago when he got cleared to start trotting again, but considering we started with 5 minutes on straight lines only and just bumped up to 10 minutes yesterday, it's not much more work for him.
Cinder, on the other hand, has been getting free lunged to let her get her excess energy out before someone climbs back in the saddle. I'm debating getting back on her Friday/Saturday, but might just wait because Sunday she's going back into training. I'm getting a pandemic bonus at work and am being fiscally responsible using it to pay for a month with Trainer A. I honestly think Cin will be fine for me to bring back into work, but I made the decision during the weeks of rain/snow/rain when I was desperately wishing my barn had an indoor arena. February can be brutal weather wise, so having a giant indoor at A's new barn will be a blessing.
The plan is for A to ride her twice a week, and then I'll make the hour plus drive up there twice a week, once for a lesson and one ride on my own. Four days of work, plus daily turnout, is a good schedule for her. I'm hoping by the end of the month I'll be brave enough to ride her out on the trails on the property and leave the comfort of the arenas. We're also tentatively planning our first show of the season, and Cinder's hunter ring debut, at the end of February. I'm excited to get back to regular work with her and start prepping for show season!
Posted by outofashes at 9:51 AM 3 comments: