It's a March Miracle

For the past month or so cantering on the right lead has been pretty damn awful.  Turning to go up the long side of the arena by the barn is especially bad.  I know part of the problem is I tense and anticipate, which causes Peebs to tense, but that's only a small part of it.  I knew getting his teeth done would help, and when the vet suggested I call the chiropractor I did.  TS came out last week and Peebs was a mess.  Dropped right in his poll (why it feels like he tilts his nose left), locked in the neck, and dropped right in the hip.  I once again felt like an awful pony mom.  From now on whenever we have major issues going right the chiro will be my first call.

I did an easy ride the day after the chiro appointment then was gone for the weekend. When I got back I was slammed with work and didn't get to ride till Wednesday.  We were stuck in the indoor since it was raining but Peebs felt pretty damn good.  So good that I had to drop my whip. I was trying to focus on what my trainer had said in our last lesson, getting up in front of my leg and lots of changes of bend and direction.

Miracle of miracles we can canter up the long side without being an asshole!! #🦄 #norunningaway #noheadtossing #nocounterbend
A post shared by Molly Basney (@mollybasney) on Mar 30, 2017 at 5:47pm PDT


Yesterday I rode outside and OMG Peebs was amazing.  Absolutely the best canter right in a long time.  He was forward, but listening, didn't get counter bent or twisted, and didn't try to bolt up the long side.  I had on the teens video us, figuring it would jinx us, but nope, he was still great.  Our canter left felt great too; it was so soft and easy.  I can't wait to jump him today and see how he feels.
Posted by outofashes at 1:11 PM 4 comments:

Peebs and His Kid

While Peebs is very much a momma's boy, he definitely has a second favorite person.  One of the boarders has an almost two year old son, R, who loves Peebs and much as Peebs loves him.


R's family moved into the barn about a year and a half ago, but obviously he wasn't out around the horses for a while. Last summer when he started hanging out at the barn more Peebs seemed very interested in the mini human. Over time whenever R is out, Peebs seems to watch him and beg for kisses and hugs. 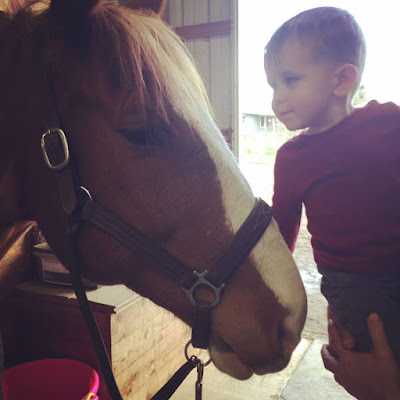 R loves to either kiss or hug Peebs' head, and Peebs is perfectly fine with it. One time when R was having a melt down Peebs kept trying to nuzzle him but R wasn't having it. Peebs turned to me as if he was upset he couldn't calm him down.

R used to call every horse Bobby, after his mom's horse, but a couple months ago he started saying Peebs.  Now every horse is a Bobby or Peebs. They were watching a documentary about draft horses a few nights ago and R kept yelling out Peebs. I'm hoping that later this summer we can do some pony rides with the two of them, and maybe eventually some lead line classes!

I think the goals I set for the first part of the year were good, but we didn't get everything.  Oh well, they'll stay on our goal list and hopefully I can figure out a plan of attack.

Me:
For Q2 here are our goals:

I had a lesson last week and all we did was trot poles.  And it kicked my ass.  But it was a really good lesson and gave me something to focus and work on.

I've been feeling a little lost lately.  Our right lead canter is shit, but I can't figure out how to fix it. Obviously Peeb's teeth played a part in that, and he's getting looked at by the chiropractor tonight, but there's more to it.  I'm not super imaginative when it comes to exercises or ways to work through a problem when riding on my own, especially if its been a while between lessons. If only I could have my trainer at the ring every time I ride.... 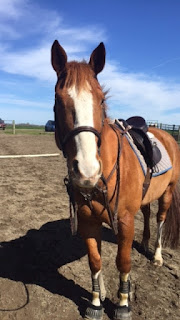 We were riding in the indoor, since it was rainy and I wanted to focus on flat work. Trainer set up 3/4 of the circle of death with poles at noon, three, and nine. She had the two outside poles along the rail, but the noon pole was sitting about ten feet in from the rail. I was a bit concerned because our canter right is no where near ready to attempt even part of the circle of death.

She had a trot the outside pole, bending to the noon pole then turning towards the wall before looping back over it then bending to the other outside pole.  So if we were tracking right it would be right bend to the middle pole, left turn around it, then right turn to the outside pole.  The goal was to get Peebs and me bending and thinking quicker. He tends to want to dump on his inside shoulder instead of moving up and around it.  This way we switch the bend up, and with not a lot of space in the indoor, I had to plan and be ready with my half halts and leg in order to set him up.  I also got called out on not having enough feel on my outside rein, and being late switching to the new outside rein in the turns. Which obviously doesn't help Peebs at all.  By the end of the lesson we were going pretty well and he was much more supple and willing to move up and around my inside leg.  While we didn't canter at all, trainer said the work we did (and the work I should continue to do) will help with our right canter issue.  If I can be more consistent with my outside rein, and he's more willing to move up and around my inside leg, a lot of our problems might be solved.


Sunday I set the full circle of death up outside to play with.  I did the exercise from our lesson to warm up, but since I had more room in the outdoor (or maybe because I didn't have a trainer telling what to do) it didn't work quite as well. We did a little canter each way, picking up a pole here and there, before another boarder talked me into doing the circle. Going left was fine but I only managed to put two poles together going right before Peebs lost his brain.  Its going from the six o'clock to the nine pole that he wants to brace against me and rush, but the rest of the time he's fine.  Obviously we still have more work to do.

Peebs got his teeth done last week, a little over a year since he last had them done.  I knew I probably should have had them done sooner since he's missing a tooth and hadn't been done for a couple of years before I got him.  But the vet was coming out to do the barns spring shots and a few other dentals so I waited.

Our barn started using a new vet last summer, and while we all love our old vet, there were some things that were slipping.  He's always been super busy, but lately its almost impossible to get an appointment with him.  My BO had a gelding she sold last year that had a heart murmur and he couldn't hear it. He's in his late 70s and, while I don't think he's planning on retiring anytime soon, our barn figured it was time to look for someone new.  Luckily, everyone loves new vet; she takes the time to talk about issues and will text and email!

New vet said that Peebs was way over due, and by her calculations, probably had never been done before I had old vet do him last year.  And old vet did a crappy job.  Poor Peebs had some big hooks.  Big enough to cut his tongue and cheek. NV said that could explain some our issues turning right; his teeth were so sharp it would prevent him from lowering his head and turning it. I knew he was needed them done, but not this badly.  And to add insult to injury, NV ran Peebs through some basic range of motion exercises for his neck and she felt that his neck and poll were out.  She suggested I call the chiropractor out for him.

I felt like the absolute worst pony mom ever. Once the sedation wore off I stuffed Peebs full of treats, which he can now eat without hurting himself.  He's going to be on a six month schedule for his teeth, and we already have the next appointment scheduled. Sorry Peebers!
Posted by outofashes at 12:45 PM 6 comments:

I've been out sick the past week with the death plague.  I'm not one who usually gets super sick from a cold, but this one had me out for a solid week.

I dragged myself to work last Monday, took Tuesday off, did a half day on Wednesday and went in for a half hour on Thursday till my student worked heard me attempt to talk and ordered me home.  She said she'd come in and work for me on Friday and that I was to go home and go to sleep.  Which is what I did.  I didn't leave my house till Sunday. 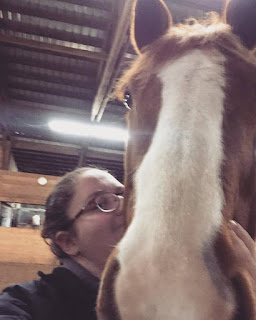 I was even banned from the barn.  I'm on self care, so I'm supposed to clean my stall and feed Peebs dinner but my BO (who's like my second mom) told me not to worry and that she'd have a couple of the high school girls take care of Peebs for me.  They even held him for the farrier for me. I did make it out yesterday to clean my stall and play with Peebs. 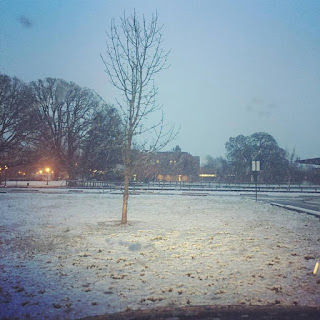 So of course today when I had to back to work, it started snowing.  Is winter over yet?!?
Posted by outofashes at 12:04 PM 2 comments: