I wanted to get a few things about Cinder checked out once she was back home again. Mainly have my farrier look at the shoeing set up training farrier gave her (my farrier isn’t familiar with this type of shoe), have the chiro vet check her out, and have a knowledgeable eye check my saddle fit on her.

Monday was farrier day for Peebs, and while Cinder was at 3 weeks and not ready to be done, I did have my farrier look at her. He had talked to training farrier a few weeks ago at a seminar, so he had a little more background info on her set up. He still wasn’t 100% sold on the special shoes but we have a plan moving forward. And if we run into trouble I told him I’ll have him and my vet out together to see what we need to do. 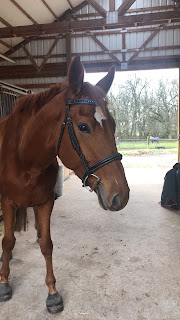 Chiro vet came out on Wednesday and was able to check both Cin and my saddle. I was worried that my medium wide treed saddle wasn’t going to fit, but it’s actually not bad. Maybe a tich wide, but it makes pretty good contact along her back and has plenty of wither and shoulder clearance. With my half pad, it should be good.

As far as chiropracticly, Cinder felt great as well. Chiro said her back felt strong and she had a nice top line for a lightly worked 3yr old. I had been thinking that Cin was a little under weight, but chiro said she didn’t think so. It’s more that she’s still gawky and gangly, and that she’d rather see her in this shape than overweight especially since she’s still growing. Cin is also just going to a bit of a leaner built horse than I was expecting.  To completely dash my hopes, chiro thinks Cinder is going to top out closer to 17.1 hands, than the 17 I was wishing for.

Back from Boarding School

I brought Cinder back home to TCF on Saturday. I was so done with having my ponies at two different barns and was beyond ready to have them be back together again.

In all honesty, Cinder is not where I was hoping she’d be after being in full training for 4.5 months. A good part of that was due to waiting for the farrier to put shoes on her and for the three weeks lost due to the wildfires and smoke. But in that 4.5 months I only saw her worked once, and never got any pics or videos of her under saddle. Trainer S agrees that Cin isn’t as far along as she should be and has offered to come to TCF in December to work her for free. I have some thoughts and feelings about this and am not ready to decide either way yet.

When I hauled Cinder over to S in July, it took maybe a minute to load her in the trailer. She stopped before stepping up, but then happily jumped in after a quick pause. She was nervous and sweaty when we got to the training barn but I chalked it up to not hauling anywhere for a year and being hauled alone. S hauled her to GS and said it took over two hours to get her to load in the trailer. And at one point she laid down in the trailer. I was a little worried about bringing her home, and I had a reason to be. It took almost two hours again to load her and we were only able to because S showed up and helped. I was beyond frustrated and so upset that the horse I dropped off at training had better manners than the horse I picked up.

But Cinder unloaded great at TCF and immediately settled in. Peebs and Scottie were more worked up about her coming home than she was. When I went out to the barn Sunday morning and took Cinder out to groom her, Peebs started screaming for her. We were all of 20ft away from him. I free lunged Cin in the arena and Peebs would periodically scream for her. Thankfully Cinder didn’t seem to give two shits about her stupid brother. When I went to lunge Peebs he kept looking back at the barn and was obviously distracted. I’m honestly surprised at how worked up Peebs was. I know in a week or so he’ll get over it and will be back to trying to bite her over the fence.

First and foremost, I've lodged a complaint with Trainer S on the fact that whatever she's feeding to Cinder, or doing to her, has caused Cin to have a massive growth spurt this summer. She's grown about 1.5 inches, clocks in at 16.3, and last week was butt high again. I told both Cin and S that I want her to grow out, not up.

And while I realize I haven't taken many pics of Trainer S's barn, some eagle eyed readers might recognize where these pics were taken. Trainer S has started working with friend and former barn owner MG at GS barn. Aka the barn I was at before TCF. Starting December 1st, S is moving her whole business into GS, but due to footing concerns at her current barn, S asked if I was ok with moving Cinder earlier. I was, since I would still be boarding at GS if stalls hadn't opened up at TCF. 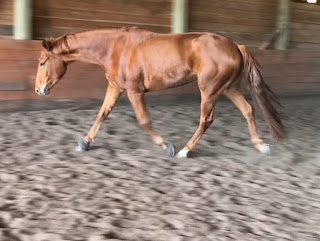 Cinder handled the move pretty well and settled in quickly at GS. The two boarders there who were there when I was both commented to me on just how giant Cin is.  One commented on how she looks like a fresh off the track TB. She's lean, muscled, and awkward limbs. She's definitely one of those horses who doesn't finish filling out till she's like 6. 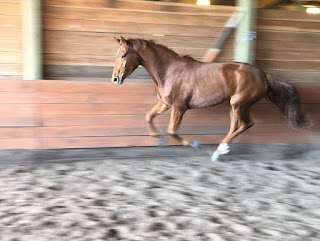 The current plan is to leave her at GS for about 3 week, then bring her home around Thanksgiving. S and I are trying to set up times so I can watch her work Cin and hopefully I can get a lesson or two in on her before moving her back home. I'm off the whole Thanksgiving week so I plan on working her at TCF a little, then letting her have her winter break. S is also thinking she might be able to come to TCF and ride/give lessons so maybe next spring I'll have her restart Cin and we'll go from there.