I don't know how else to say it, but fuck 2020. The last month has been one thing after another, if not on top of each other. 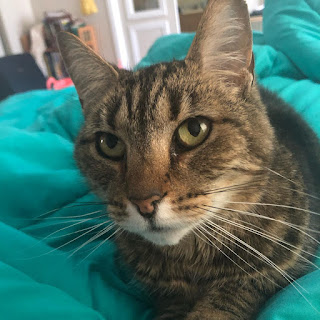 So three weeks ago, after getting home from work one night, I noticed my 14yr old cat Eddie was weak and wobbly, losing control of his hind end. He was very painful when you tried to pick him up, or touch his hips/tail.  He was also reluctant to eat, which for Ed was a big red flag. He was always up for some wet food. I took him into the emergency vet and his xrays showed no acute injury. He had some arthritis, but nothing out of the ordinary for an older, active cat. His blood work was normal. I was supposed to leave the next day to help my parents drive up from San Diego, and because Ed was so painful, I decided to keep him at the clinic while I was gone.

I got good reports while I was gone, and picked him up on a Sunday afternoon. He came home with some strong pain meds and was doing ok till the last dose of meds wore off. Then he was worse than he originally was. He was crouched on his front legs, with his hind legs collapsed under him. He could barley move. I called the clinic for his final appointment. KP, Cinder's breeder, is a vet at this clinic and did the euthanasia for me. We sat and talked for a while about Eddie and Cinder and it was nice having a friendly face there. 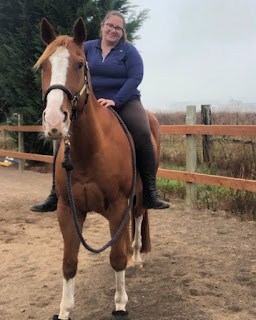 Six days later I got a text from the barn that Peebs was colicky. Again. A month after his first colic of 2020. I left work, called my mom, called the vet, and immediately dosed Peebs with banamine once I got to the barn. By the time the vet got there, Peebs was much more normal and was eating the small amount of hay I gave him. Dr. W checked him out and declared this was a gas colic, as opposed to the impaction he had last month. We pulled blood as precaution, and talked a lot about some feeding changes for Peebs.

The hay TCF feeds is a local grass mix, mostly orchard and fescue. Vet thought the orchard grass might be irritating Peebs since it's a physically rough hay.  I went out and bought Peebs half a ton of timothy hay. Peebs also started getting Purina Outlast. He's not normally what I would think of as an ulcer prone horse, but it couldn't hurt. Finally, he started Assure Guard Gold on my vet's recommendation. I had to order it, so he started on it yesterday.

We did have the conversation that Pebs could potentially have a lipoma causing issues, but nothing serious enough yet to warrant surgery.  But it's something we need to think about. I was convinced for about a week that Peebs would be on the operating table by the end of 2020, but that's lessened somewhat.

And to top it all off, Peebs has been NQR under saddle. We've had some good work to the right, but tracking left he's very stiff and unwilling to bend. I had my trainer out for a lesson/to get eyes on him and she agreed it's nothing I'm doing, or not doing, but he's very stiff. I had the chiropractic vet out last night and she said he feels great and is in good muscle condition following our rehab from the wildfire smoke. I think his issue is that he needs his stifles injected again, as his left stifle is worse and that's the leg he's unwilling to bring under himself. So I'll have our regular vet out again for a lameness exam/injections.

And in case I haven't had enough vet bills in the last 6wks, my other cat Luna goes in next week to have two teeth extracted. Cinder is my only animal to not have any vet bills and I told her she needs to keep it that way. Despite continuing to grow when I told her not too, she's the current favorite animal in my household.