Back to My Pony Kid Days

I'm a visual learner. I need to be show how to do something in order to do it. When someone explains things as they're doing it, I'm golden. I also love visual clues or reminders for things. No matter how many times my trainer tells me to keep my hands closed, or shorten my reins, it just doesn't stick.

My inability to keep my fingers closed around my reins, especially my left rein, became very apparent in my last lesson. I just could not keep my reins short. I joked with my trainer that I needed to be a pony kid again and break out some rainbow reins to remind me to keep my hand on a certain color and she told me to go for it. 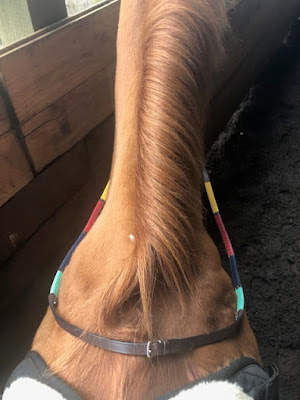 So I swung by the local farm store and picked up a pair or $30. Now I can very easily tell if my left hand has gone rogue and if my reins are even. My current joke is that I'm playing Twister and the prompt is always "Left Hand on Blue". And even after only a few rides with them, I'm finding it easier to keep my left hand where it's supposed to be.
Posted by outofashes at 12:55 PM 4 comments:

Ugh pretty much sums up the last month or so.  Work was incredibly busy and stressful, but *fingers crossed* we should finally be back to normal (or at least fully staffed). Life with ponies at two different barns has me feeling like I'm being torn in two different directions, but that's going to change this weekend. And last but not least, winter sucks.

Peebs and I started December off pretty well.  We had been focusing on our flat work and I felt like we were making progress.  Until I took my bridle apart to clean and condition and then screwed up putting it back together again.  I somehow swapped the cheek piece and noseband attachment on one side, causing the the top of the full cheek bit to dig into his face and didn't notice it at first. We had two really, really bad rides where Peebs just felt MAD. He was flat pissed at something and I couldn't figure out what and actually texted my trainer on the verge of tears to see if she would be willing to ride him instead of me doing a lesson. Then I thought about what happened in the space of two days between our last good ride and the bad ride and took a good look at my bridle and figured out my mistake.  Sorry Peebers!!

In our first, and so far only, lesson this year Peebs took great exception to the puddles in TCF's arena and at one point ran my leg into a standard rather than trot through the puddle. I then got off and put my spurs on and we had a slight CTJ about moving off my leg. He then had a meltdown about my spurs and our lesson was spent almost entirely at the trot, but our rides since then have been good. He's more responsive and attentive, and I've been able to put the spurs away for now. We haven't been consistent in our schooling at all in the past couple of weeks, but hopefully that will change.  Peebs is moving back to TCF this weekend. One of the boarded horses at TCF had to be put down and Peebs is taking that stall. It will be so nice to have the ponies back together again.

Temperature wise, it's been a fairly mild winter. But we've gotten a lot of rain, and a fair amount of wind. Cinder's feet have had a hard time coping with the moisture. Last winter she didn't have turnout in the pasture, just the arena, and this year she's out 6-10 hours a day. She's also growing out some not so great hoof from when she had her big allergy attack last spring and we were switching up her diet trying to figure out what she could/would eat. All that combined has lead to her chipping off chunks of hoof, sore feet, and her first abscess. Luckily my farrier was able to come out the day after I suspected she had an abscess and dig it out. Cin was not a fan of having her hoof soaked, but surprisingly didn't chew off her hoof wrap. I've started painting her feet with Keratex as she's still a little tender footed. Next winter I'll start that sooner and hopefully she'll have better feet all around.
Posted by outofashes at 7:36 AM 2 comments:

Thanks to May As Well Event for the bloghop! I know I'm a little late to the party, but hopefully I'll be able to catch up on blogging soon. 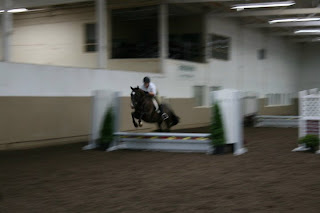 When 2010 started, I had Phoenix and I believe we showed once before he came up lame.  We spent most of the summer trying to figure out what was wrong before he was diagnosed with side bone in his right front.  I made the decision to retire him at 15. I had started riding my former BO's gelding Buddy and once I started horse shopping she offered him to me. I bought him in the fall and spent the fall and winter playing around with him. 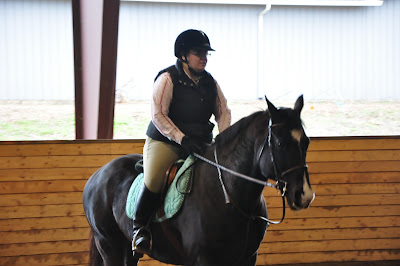 In February Phoenix moved out of the barn and into my trainer's pasture to be a buddy to her retired mare and he fully embraced the retired life.  I continued to DO ALL THE THINGS with Buddy.  We jumped and showed in both the hunter and jumper rings, took western lessons, chased cows, and went on trail rides. 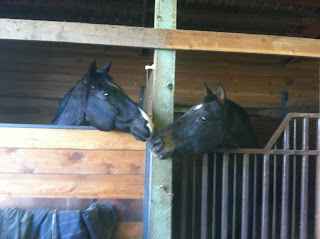 Phoenix moved back to the barn, came out of retirement, and was leased by A who was in 4H and wanted to learn how to jump. Buddy and I continued to play with all the disciplines. 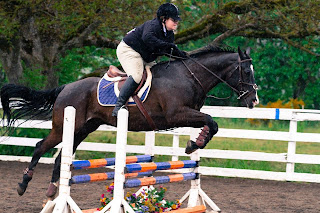 At 17, Buddy started to show his age and while we kept showing in the spring and summer, in the fall I made the decision that he probably needed to step down and not jump 2'6" plus anymore. He did help me qualify for my first medal finals, and because horses, the only time in the 7yrs I knew him he was went lame three weeks before hand. I borrowed the wondermare Tia and while having rider error in our over fences round, had a blast. Phoenix continued to pack A around and she took him to her first show over fences. In the fall my former BO found an add for a 5yr old OTTB mare four hours away from us and convinced me to take her sight unseen after her owners agreed to give her away. In all honesty, I didn't really want McKenna, but agreed. 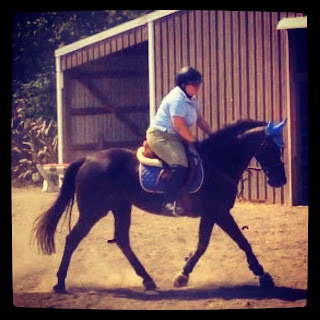 Buddy sold very quickly once I listed him, and for more money that I was asking, totally spoiling me for selling horses. Phoenix came up lame and my vet told me in no uncertain terms that at 19 it was time to retire him for good. McKenna got all my time and attention that summer/fall and while I felt like we were stuck we did actually make progress. She turned out to be much greener than I thought when I got her and I spent much of my time learning how to sit her spooks/spins/bolts/rears. 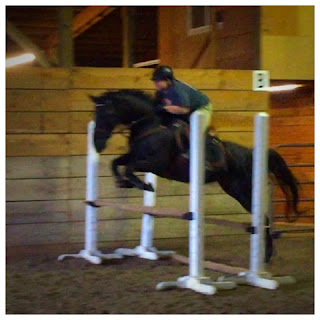 I came to the realization that I didn't actually like riding McKenna, and put her up for sale. We then have some fantastic lessons, including jumping 3' in a gymnastic. I got a new job, which was the exact same position as my old one, just at a different university. That alleviated a ton of stress and combined with actually feeling like I was making progress with McKenna, I reconsidered selling her. Phoenix colicked badly in November and I made the decision to put him down. It was very clear there was nothing the vets could do, and while it was the toughest decision I've ever made, it was also the easiest. McKenna moved to her new family (which is the barn Peebs is currently boarded at) a couple days after Christmas, and for the first time in 10 years I was horseless. 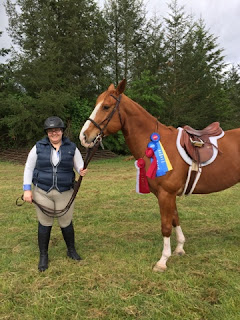 Three weeks later I bought Peebs. I knew from the first ride was was supposed to be mine; he felt like home. There was some definite "get to know you" issues but once we figured things out I started having a ton of fun with him.  In our first show together, after having him for three months and not showing in almost two years, we won division champion. We continued to show that summer and Peebs proved what a rock star he is. I also bit the bullet and ordered my custom saddle since finding a used one to fit him and me was proving to be impossible. 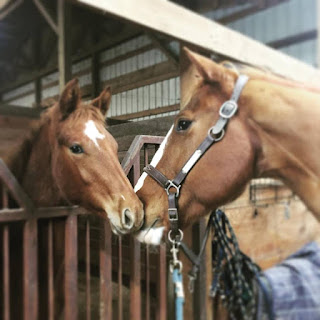 Peebs continued to be awesome and I really started to trust him. We continued showing and having fun.  I decided to do a breed lease on wonder mare Tia but unfortunately she lost the pregnancy and was given very slim odds of being able to get pregnant again.  In the fall a fellow boarder at the barn offered me her homebred warmblood filly.  I initially said no, then went to see her, and after talking my mom into helping me pay for her I agreed to buy Cinder.  She came home in December. Also that fall a new trainer moved into the barn and started causing drama and issues that I tried my best to ignore. 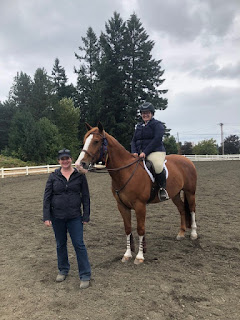 Barn drama got way worse in January and in early February I gave my 30 days notice. It killed me to leave the barn I had been at for 11 yrs and the owners who I considered my second family. But it turned out to be a blessing and, for the first time in eleven years, I could focus solely on my horses. Cinder turned 1 and we did all the baby things. Peebs was still a rock star and won division champion in the hunters, and reserve champion in the equitation at the first show I went to completely on my own. We ended the year by being series champion in our hunter division for our local schooling show series.  We also were second reserve champion in the hunters, and fifth in the eq for our state wide show association. 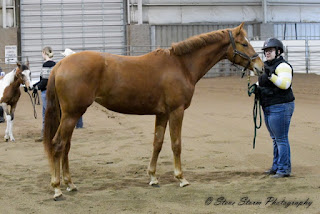 Cinder got to start show season off in 2019 in halter and showmanship. We won the halter for her first blue ribbon. Peebs and I dabbled in hunter and jumpers where we had some great rounds, and some not so great rounds where I forgot how to ride. The ponies moved to A's house for summer camp while I helped take care of the barn while A was away on an internship. I love TCF and was very sad that they only have one stall available for fall/winter.  Cinder stayed while Peebs moved back to GS.  Having the ponies at two different barns has been a challenge, but I'm learning to roll with it. Once another stall opens up at TCF Peebs will move back.