As the Poop Turns

Unsurprisingly, all last week centered around Peebs' poop problem.  I didn't see any change from soaking his hay, and after the first day the Bio Sponge didn't seem to help.  I got a bale of low sugar hay from my vet, but again, didn't see much difference.  Peebs was still happy and otherwise normal, so I started to calm down a bit.  I talked with another vet, who has a horse with similar problems to Peebs, and she said that's just the way some horses are. So I put Peebs back on his normal hay, not soaking it, and we'll be switching back to his normal grain.  I did decide to do a round of psyllium, because why not (and it was on sale at the feed store) and I think that's helping a bit.  He still has some runny discharge, but not nearly as much as before.

In other non-poop related news, we had an awesome lesson last week.  We were stuck inside because it was pouring down rain, but we set up a one stride.  Peebs was pretty point and shoot, at least tracking left, so trainer had me first drop one hand then both hands. Do you know how hard it is to A) have four reins in one hand and then try to pick up your reins again and B) tie knots in two sets of reins? Damn pelham! We went through a few times with no hands and other than trying to fall in going right, he was so good.  It really emphasized how happier he is when I don't touch his mouth and get in his way. 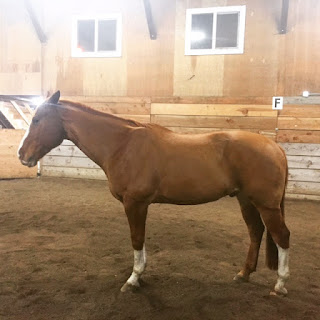 Peebs also got his winter hair cut. He was surprisingly good for it, except around his head but I knew that would be hard.  He was actually one of the easiest clips I've ever done.  Buddy loved being clipped, to the point that when you stopped to let the clippers cool down he would paw and wiggle till you started up again. Peebs just stood like a gentleman the whole time (I wasn't near his head) and was very polite about everything. I do have a couple touch up spots to do by his head, but we'll get to those this week.  If I ever have to clip his head, I'll be getting drugs for that.

Peebs has had either a little bit of runny poop or watery discharge down his leg off and on since I bought him.  His old owners told me it happened when they switched hay, but its more than that.  I had my vet look at him in April and we tried a few different pro biotics to see if any helped.  Not much did.

A couple months ago we started using a new vet, JD, who I really, really like. She had a few thoughts on what it could be and recommended a different pro biotic and GI health supplement.  I started him on it and while it did help, Peebs would still have occasional discharge.  She also ran a fecal on him, and he came back with a zero egg count.

On Wednesday I noticed a little more discharge than normal, along with a little stocking up in both his right legs.  He had had a light lunge on Tuesday and had Wednesday off, so I figured I just needed to get him out more.  Thursday there was a lot more discharge down the back of his leg, and while I had him in the cross ties he farted and brown water came out.  Seriously gross.  And again, both right legs were swollen, as well as the right side of his sheath.  I called JD, not super freaked out because he was sound, bright eyed and bushy tailed, and the swelling went down after I rode. He was also eating and drinking like normal and showed no signs of colic.  JD called me back and agreed to look at him on Friday.

Friday his butt and leg were once again covered in watery poop and JD got to see him fart out brown water again.  All his vitals were normal, we lunged him and he bucked and played, and generally he's fine.  She did take and run blood (all normal) thinking it could be in infection (including salmonella or Potomac horse fever), it could be there's too much sugar in the hay, or he could be an irritable bowel syndrome horse.  Awesome. She wasn't too concerned about the swelling, said that since he prefers to lay down on his right side that's why he's stocking up those legs.

She did want to change his feed around.  So we are currently soaking his hay to remove some of the sugar, we added some alfalfa to up his protein, changed his grain to Purina Senior to remove any variables from buying a local made alfalfa/timothy based grain, and added BioSponge over the weekend to help. She also wanted me to put diaper rash cream on his butt so he doesn't loose hair and get sores.  Poor Peebs.

So far the BioSponge seemed to help and we're going to keep him on that for a week to help him adjust to the new feed.  After I soak his hay, the water smells and looks like sweet tea, so obviously there's plenty of sugar coming out.  I do have a lead on some low sugar hay that a friend knows of so I might buy a couple bales to see how Peebs reacts.  The plan right now is to keep soaking and see if he stabilizes after a week and if not, then we might be hauling into the vet school for a rectal biopsy.  But on the plus side, since he's sound and full of energy we've got the ok to keep riding and working as normal.

We were supposed to go to our last show of the season this Saturday.  There is a 100% chance of rain (over an inch), which wouldn't be a deal breaker, but winds in the 40-60mph range.  If not worse.

I was texting with my trainer this morning about it, and neither one of us wants to haul in that kind of weather.  Maybe if I had a goose neck trailer instead of a bumper pull, but even then it's just not worth it. So instead of cleaning tack and packing up the trailer tonight, I'm going to be grocery shopping and battening down the hatches.
Posted by outofashes at 12:19 PM 6 comments:

Give it the Boot

For work, I wear muck boots anywhere from 4-8hrs a day.  I hose down kennels and tuck my scrubs or coveralls into the leg of the pans.  I bought a pair of Muck Boots just over a year ago when I started here.  They only came in full sizes, and I'm a solid 9.5.  I bought the 10s because the 9s were a smidge tight and I'd rather have a little extra room then squeezed feet.
The left boot started to crack a couple months ago and my foot was getting a wet.  I was pissed, because even with as much as I used them, I'd figure they'd last over a year, not ten months.  I found a pair of Noble Outfitters MUDS that came in half sizes and ordered them up. The foot fit great but the calf was a bit tighter than the Muck Boots. Within a week I started getting a rash of the back of my calf.  I thought it was because I had a pair (sometimes two pairs depending on if I had to wear my coveralls and scrubs) of pants tucked into them and it was hot and I was sweaty.  On my right calf the rash developed into an open sore, kinda like road rash and I was left with a big scab.


I stopped wearing those, obviously, and went back to the Muck Boots.  But now the Muck's have more holes, and it's raining, and I have to walk around muddy fields.  So I tried the Noble's again to see if maybe they'd work now, it's been a couple months and its not as hot and I'm not as sweaty.  Big, fat, no.  Just like the big weeping rash on my calf.  I'm currently alternating letting it dry in the open and wrapping it with gauze and vet wrap.  So I went out and bought a new pair of Muck's that only come half way up my calf as to not irritate it.  Hopefully these last longer than 10 months.  If anyone has a pair of muck boots they recommend that last a long time and have a big calf let me know!
Posted by outofashes at 3:02 PM 7 comments:

Fall has definitely fallen here in the PNW. It's started raining this week and won't stop till May. It's getting colder and almost time to break out sheets and blankets.

It's also time to start riding inside. Last fall/winter when I had McKenna I exclusively rode inside because I didn't trust her outside. When I got Peebs in January we rode inside some, but were outside as much as the weather and footing allowed. This winter I want to ride and jump outside, but I also really, really don't want my new saddle to get wet.  I know it's going to happen at some point, I just want to push it off as long as possible.

We've had a couple rides inside over the past few weeks and they've all been terrible. Peebs has been tense, not wanting to give or bend, and was an absolute freight train in the canter. During one ride he even bucked/flailed/leaped when I asked for the canter. It was like he completely forgot how to horse inside. I don't know if it's the small size of the ring he doesn't like, or the footing which is a bit on the hard, compacted side and is getting a new load of sand next week, or what.


So yesterday, after I drove in a hail storm on the way to the barn, my expectations for riding inside were low. I figured as long as he wasn't a complete tool I'd be happy. But, we actually had a pretty decent ride. He was willing to soften and bend, had some great transitions, and when I asked him to sit back on his haunches and balance in the canter he did! I don't know what was different about today vs the past inside rides but I'll take it! Now if only we can repeat this all winter....
Posted by outofashes at 8:12 AM 2 comments: