Merry Christmas and Happy Holidays from Peebs, Cinder, and me! 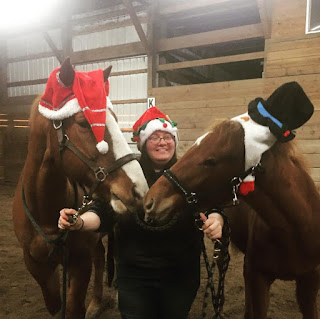 Cinder turned seven months old on Saturday. I’m still amazed at how good she is. We’ve taken walks down the road, and other than not wanting to go through puddles she handled it really well. She did spook at a friend standing behind a hedge but got over it pretty quick. And all she really did was try to get as close as possible to me without not actually running me over. She handled cars, trains, and dogs like they were nothing.


I wanted to measure her to see exactly how big she is. I used my BO’s stick that Peebs was terrified of. In perfect baby fashion she was skeptically curious and handled it fine. She’s 13.2 at the wither and 13.35 at the hip. She’s gotten a hint of rib this past week and her butt’s shot up so we’re in a growth spurt. 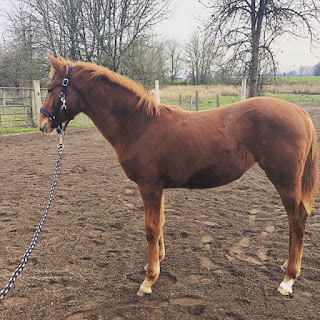 Sunday I asked my BO for some help with Cinder. She’s started a bunch of babies and loves working with young/green horses. We practiced picking up Cinder’s feet, started trotting in hand, introduced clippers and tieing. BO ran the lead rope through a tie ring in the indoor and just held steady pressure. Cinder hit the pressure, tried to take a step back, realized she couldn’t, and promptly went forward to give to the pressure. We did this for maybe three minutes and she never freaked out any time she hit the end of the rope. BO kept saying how smart she was. The clippers didn’t go quite as easily, but with some cookies as bribery she was standing still for them around her muzzle and neck. 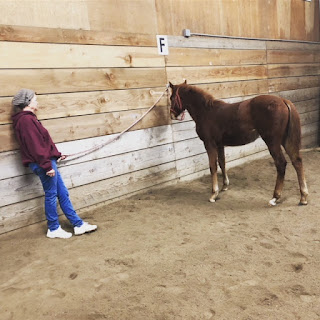 Most importantly I’ve decided on a show name for her, Bright Side. It might or might not have come to me as I was driving to work and the song Mr. Brightside came on the radio....

I'm a big believer in the magic of Back on Track products.  I had a sheet and saddle pad for Buddy, and they made a huge difference in the winter for him.  Peebs is similar to Buddy in that he tends to get more muscle sore/stiff than joint stiff (furiously knocks wood).  So I bought him a sheet over the summer.

I had the chiro out a month or so ago for him and she noted that his hips and back feel much better than usual but his neck is still his weak spot.  He loves to impersonate a giraffe; part of it is how he's built, and part is he likes looking around. I always know when it's time for him to see the chiro because he stops being able to bend his neck to the right and will brace and hold tension in his neck.  So my one Black Friday/Post-Thanksgiving Sales purchase was a BOT neck rug for 20% off.  Then last week SmartPak had one of their 25 days of Christmas specials as a BOT pad with free polos.  It also combined with another 15% sale, so I got a pad and polos. I've been using the sheet since we started blanketing the horses, sometimes layering it under another sheet or medium blanket once the temps dropped. Peebs started wearing the neck rug Tuesday and I just started using the saddle pad and polos last night.  He's been warming up much faster than before and feels good.  Almost too good.  So good he needs a lunge before we ride if he's had a day off or a couple of easy days.  So good I dropped my whip earlier in the week and didn't use one last night.  So good that I had to do our canter work last night in a half-seat or two point because if I sat he impersonated a race horse.  I'm happy he's feeling great, but I'm knida worried about the monster I've created.
Posted by outofashes at 9:18 AM 3 comments:

Once again I've fallen behind on blogging.  But the biggest and most important thing is that Cinder came home last Sunday.  I'm excited, but also terrified.  Who let me buy a baby?!  I have no idea what the hell I'm doing.  I'm assuming this is kinda what if feels like to bring a human baby home from the hospital.

I convinced a couple other boarders at the barn to come with me when I went up to get Cinder on Sunday.  I figured having someone to talk to in the truck would help calm my nerves and get my attention off every bump and sway in the trailer.  We took Rosy, my BO's mini as a travel buddy for Cinder with the plan of putting them in a stall together over night while Cinder settled in. As we were getting ready to load up, KP (who is a vet) and I talked and decided to give Cinder her vaccine booster then and she took it like a champ.  We put Rosy in the first stall in the trailer, shut the divider, and Cinder took maybe 45 seconds to load.  She did get a bit nervous when she realized mom wasn't with her, and called a couple times.  But once we were on the road, I didn't hear or feel anything.

Rosy must have had words with Cinder because back home when we turned them out in the indoor together Rosy pinned her ears and Cinder wouldn't come within 10 feet of her.  Obviously Rosy does not appreciate having to play babysitter, thank you very much!  We let Cinder play around in the indoor for probably close to an hour and she called maybe five times?  Way, way less than I was expecting.  We decided to split Cinder and Rosy up and Cinder was walked happily down the aisle away from Rosy past a bunch of other horses and into her new stall.  She paced for a few minutes till I gave her some hay then seemed to settle in.  And from the reports I got (our BM lives in the apartment in the barn), she was pretty quite during the night.

BM put Cinder out in the indoor during the day Monday for me and said she was great.  When I came in the afternoon she seemed like she had been living there forever.  I turned her out again to clean her stall and tried on the foal blanket I got for her.  She spun a couple slow circles around me when I first put it over her back, but didn't seem to care at all when it was on and fastened.  It was hilariously too small so I ordered a pony sized one.

Yesterday the farrier was out so we brought Cinder out to mess with.  She was super not happy about her back legs being picked up, but a light smack on her ribs and a firm "Knock it off" got the point across.  She's smart, and once she realized that she got pets and scratches for holding her foot up she was fine.  Farrier rasped a little bit off on each foot since she was in the middle of a cycle and didn't need a full trim.

Good luck with that Cinder


I turned Peebs and Cinder out together after their feet were done.  I was a bit hesitant because Peebs can play kinda rough, and his favorite game is chewing on other horses.  But baby sister wasn't having any of that.  He tried to bite her neck and she whipped around and let both back feet fly at him. He backed way off, and pretty much let her do whatever.  She tried to nurse from him and he just took it with a confused look on his face. I'm pretty sure he's going to be squarely under her hoof from now on.
Posted by outofashes at 2:54 PM 6 comments: