I fully admit that I'm the type of rider who doesn't jump or jump anything of height for a while and I get nervous. I KNOW that I've jumped higher, and that both my horse and I are capable of doing what's in front of us, but I still get worried. And lately, Peebs has been super charged when we've jumped and we've only been doing cross rails.

I had set up some trot and canter poles last week after the arena was dragged because I was too lazy to set jumps.  Peebs was good warming up over the trot poles and single poles I had set out, but when we went to school the canter poles (a one to a one) he lost his little brain. Going left was fine, but going right he threw his head up and bolted down the line. We did a lot of transitions before attempting the line again. He was still strong, but listened. Not exactly a great confidence booster, but I was happy we ended on a good note.

So imagine my surprise when scrolling through Instagram on Sunday I saw a gymnastic exercise and immediately wanted to do it. My horse had just lost his mind doing poles, and here I am wanting to do a gymnastic? I set it up Sunday telling myself I could always break it back down and just do the trot poles to the first cross rail when I jumped on Monday. Which is what I did. He got a little excited the first time, but biffed the trot poles and seemed to realize his mistake. All the other times through the grid he was foot perfect. 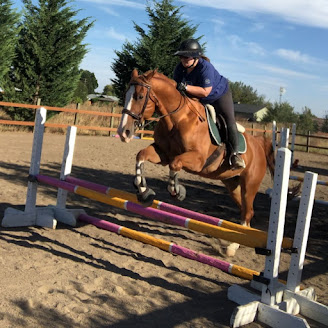 I gradually built it up to trot poles, cross rail, one stride to a vertical, one stride to an oxer. Obviously nothing got big but as soon as I made the third fence an oxer I got super nervous. We had just done cross rail, vertical, vertical and it was perfect and I know making an oxer changes nothing but I still had a pit in my stomach. But Peebs does what he does best and took care of everything. He was quiet and calm coming in, hit each stride perfectly and was soft in my hand. It was the easiest thing. And best of all, it was fun! I hadn't realized how much I missed having a fun jump school till this ride. It was exactly what we needed! Now I just have to remember this feeling going forward. And probably set gymnastics more often.

Farrier J finally came out on Tuesday and Cinder got her first shoes. He was supposed to be out last Saturday but never showed up. I went out to see Cin and Trainer S was very apologetic. I told her I know its not her fault, J is just like that. He does good work, when he shows up.

Cinder is also officially under saddle. Trainer S has ridden her a handful of times, mostly just sitting on her. She didn't want to do too much until Cin had her shoes on. Cinder has been great about being ridden.  Hopefully I can see S rider her soon! And get on her myself! The plan is either at the end of next month, or during the following month, we'll swap out one or two training rides a week for lessons. I can not wait!

Since Peebs popped a splint a few weeks ago, we’ve taken it slowly. We’ve mostly been doing flat work with a couple jump schools. He’s been sound *knock wood* even though the leg looks gnarly.

Our first time jumping in about a month was in a lesson. I wanted my trainer to put eyes on him to make sure he was sound. I can pretty much always convince myself a horse looks off if I’m worried about their soundness so having impartial eyes was a big relief. Peebs was pretty happy to be jumping again and was launching himself over the crossrails we were doing. 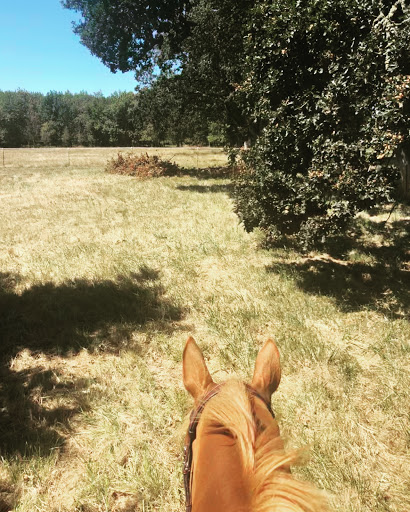 We also been hacking out in the “derby field”. The barn has a big grassy section off the end of the arena that’s the drain field for the septic system. In the winter is too wet to ride on, but it’s totally dry in the summer. There’s holes, and I don’t feel comfortable doing more than walking out there, but’s it’s been a great to wander around in. I wish there was a way to till it to even out the ground without disturbing the septic system. It would be super fun to jump around out on the grass.

I posted this on IG, but I figured I'd do a longer version for all the horses I've had. 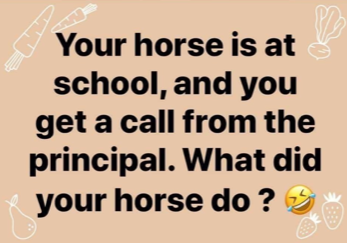 Phoenix: Letting himself and/or a friend out for a walk and not being where he was supposed to be.

Buddy: Talking back to the teacher, not applying himself in class, being lazy.

McKenna: ADHD issues, randomly breaking out into dance moves in class. Would get the comment of talented, but needs direction on her report card.

Peebs: Roughhousing with friends and they destroyed their clothes and shoes were lost.

Cinder: Accidentally destroying school property and not knowing how she did it. Not paying attention in class.

It was my understanding that Cinder was going to get her first set of shoes last Friday, and that Trainer S's hoof/leg specialist vet would be there to consult with Farrier J.  Half of that ended up happening.

Vet K was there, she was also doing a PPE on another horse in the barn, so I did have her take a look at Cinder's feet. Cin had some high/low issues going on, and after a set of radiographs, her left front is a club foot. Not a bad one, but a club foot. Luckily, she has more sole depth than K thought she would have and my farrier, Farrier L, has done a great job of trimming her. I would honestly like him to keep doing her while she's in training, but he doesn't have time to do just one horse at a barn he doesn't go to.

Farrier J, S's farrier, ended up not being able to make the appointment so hopefully he can make it out sometime this week to do Cinder. I've used J in the past, and he's good, but he's not so great about communication, or being where he said he'd be, when he's supposed to be there (big reason I switched to L who is fantastic about communication and being on time or letting you know in advance that he'll be late). Vet K did message him about what set up she'd like on Cinder (aluminum Rockers in front), and what size shoes she needs so again, fingers crossed, J can make it happen this week.

Cinder's been in training for a month now and I finally got to watch Trainer S do a ground work session with her. Trainer S's approach is short, but frequent sessions. Most days she works Cinder twice, a short ground work session in the round pen or arena, then takes her out for hand walk on the trails. She's planning on the first ride this coming week.
Cinder has gotten used to the hoof boots, and hopefully will get her first set of shoes this week too. She's much more comfortable moving out and holy crap can she trot. I didn't get any of it on video since I was so impressed, but it was an under saddle winning trot. When I first brought Cinder over Trainer S said she's built more like an eventer, but after watching her move she agrees that Cin is a hunter. I'm going to have to learn how to ride the hack better to keep up with her! 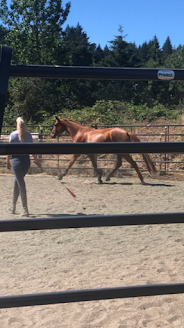 Cinder's ground work has come leaps and bounds. Trainer S works in the Buck Brannaman style and has gotten Cinder to the point where she moves whatever leg Trainer S looks at. She still wants to blow Trainer S off at points, but a quick correction and she's behaving again. Trainer S did say she's the type that you really have to convince her that you're the boss. 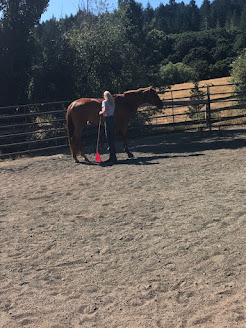 Trainer S has said that Cinder's taken in everything pretty much in stride. The past two weeks they've had all the boards on the indoor arena walls replaced and stained, and Cinder handled the noise better than some of the older horses. And out on the trail she might look at something, but she usually wants to walk up to whatever it to investigate instead of spooking. So of course the day I'm there she legit spooks. There was a white plastic barrel that had been moved down to the round pen and Cin spooked and snorted at it. She puffed up and took a few steps sideways, but got over it pretty quickly. If that's the extend of her spookiness, I'm ok with that!
Fingers crossed S has an uneventful first ride on her this week!
Posted by outofashes at 8:45 AM 3 comments: