We had a lesson last Wednesday, and will hopefully continue to have weekly lessons for a while, and we rode right during feeding time.  The mare was up and not super happy to be working at first but we held it together.  But when we started jumping all she wanted to do was run at the baby crossrails. We spent close to 45 minutes trying to get her to trot the fences without running at them, sucking back behind my leg, hanging on my hands, throwing her head, or going sideways.  Both my trainer and I were really happy with how I handled it.  I didn't get mad or upset just kept on asking for a decent trot, straightness, and connection. Even a couple months ago the antics McKenna pulled would have A) freaked me out and I would have have my trainer get on her and/or B) sent the mare into outer space.

Saturday I wanted to jump again but this time I set out trot poles before the jumps to try and slow down the beast.  After we warmed up on the flat we started jumping and the mare decided that trot poles are really supposed to be cantered.  We attempted to trot nicely but she was completely ignoring my hands and plowing thru the pole and fences.  I stopped her hard in front of a couple jumps and circled around to come again which usually gets thru her go-go-pony brain but it didn't work.  I decided to pull out the big guns and got off to switch her bit.

I've been riding her in a French link but obviously that doesn't have enough brakes.  I grabbed my slow twist and got back on to see how she would do with it on the flat. Other than stopping once when I half halted strongly she didn't seem too upset by it. Sunday we attempted the trot poles to jumps again and what do you know?  I had a pony with brakes!!  She was still wanted to go go go, but came back at my half halts and listened.  I think I'll leave the slow twist on this bridle and set up the French link on another so we can have a jump bit and flat bit.

The past few weeks have been a whirlwind. I had my last day at my old job on Labor Day then left on vacation. My mom and I spent a few days in NYC before going to New Jersey for a cousin's wedding. We flew home a week ago and I started at my new job on Monday. So far I'm loving it!! The people are great, they pay more, my commute and gas has been cut in half and I basically get paid to play with dogs all day!
The only downside, if you can call it that, to the new job is that it's full time vs the three quarters time I was working before. But with my commute going from 50mins to 25 I'm actually doing about a half hour more a day.


Between that and some new boarders moving in I've been trying to figure out my new barn schedule. The barn is a lot busier than it was this summer when, for the most part, I had the place to myself. Right now McKenna is still outside 24/7 but once it really starts raining she'll come in and I'll be battling for arena turn out time.

While I was gone I had my BO's dressage trainer ride McKenna for me a couple times. She's seen me ride and we've talked quite a bit so she was familiar with the mare. She absolutely adored McKenna, saying she has much bigger movement under saddle than she expected and that she has tons of potential. I was really happy that when I got on this week McKenna was a lot softer on the right rein than before. I think I've worked a deal with BS to have more training rides in the mare's future.

About a month ago there was an add on a local FaceBook group for jumps for sale. We have plenty of standards and poles, but not a whole lot of filler so when I saw that they had multiple boxes for sale I claimed two of them.  After driving up and getting them I set them up in arena with a plan to lunge McKenna over them and jump them with Tia.  But then the girls went lame and that never happened.

McKenna's all healed up and sound after the abscess and has PLENTY of energy from her two week vacation so I figured it was time to introduce her to the boxes. I started by free jumping her over a crossrail then move it up to a vertical. Once I dragged the box over she thoroughly inspected it and took a taste test or two.   I asked her to trot around and she immediately went right to the jump and popped over with no problem.  I had her do it a few times at the height set in the pic then put it up a few holes.

This time the mare was all over it.  I barely stepped back from readjusting it and clucked to her and she took a few canter strides and jumped it the opposite way I had set.  Then she landed, went around the corner, did an awesomely tight rollback and came directly back to the fence.  I'm so upset I didn't get it on camera!  It was something out of a jump off, they way she sat on her hind end and flipped around.  And best of all, I just stood there and watched her, I didn't have to do anything.  The mare has definite talent as a jumper. 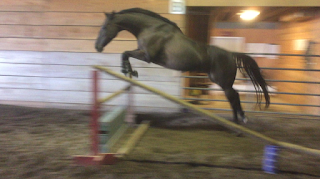 She probably went around on her own 3 or 4 times before I actually had to ask her to stop.  She was happy to keep on jumping and didn't need any encouragement from me. I guess I didn't need to worry that she's be scared of the boxes or fill. 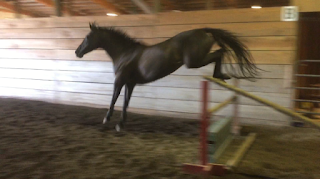 make animated gifs like this at MakeaGif
Posted by outofashes at 8:37 AM 2 comments:

The vet was out Wednesday to check on the lame mares and, surprise surprise, both of them weren't lame anymore.  Damn it girls!  But on the plus side my home diagnosis for both of them were confirmed by the vet.

We started with Tia who was walking normally but still had some sensitivity on her suspensory.  Both the vet and I thought that she probably got worked up in her paddock last weekend when we had some thunderstorms roll in and re injured herself.  So she's on stall rest with hand walking for another couple weeks then recheck.

With McKenna I told the vet about the on and off lameness and the slit on her coronary band.  When we pulled her out of her stall she had a very obvious spot of blood on it and when the vet pushed more blood/pus mix came out.  He did put the hoot testers to her and she wasn't reactive.  He recommended a few days of Epsom salt soaking to draw anything else out then switching to an iodine spray to dry it out. 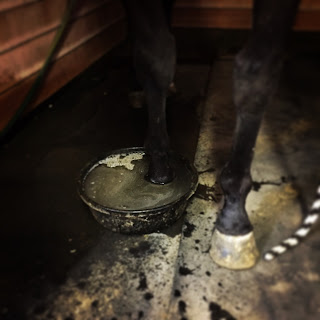 We did her first soak later that night and she was surprisingly good for it.  She didn't want to stand still for very long but happily put her foot in soak.  She likes to put both her front feet in her water trough in the pasture and splash around so I was expecting some that to happen but she didn't.

I'm pretty sure I should just give up trying to plan anything equine related. McKenna is still still off and on lame and Tia, who was doing better, lost a chunk of hoof, had to go barefoot for a cycle because she doesn't have enough of a right foot to put a shoe back onto, is now three legged lame. Of course she lost the chunk of hoof on her good front leg but somehow is three legged on the bad front leg.  The vet's coming back out tomorrow and at this point I'm just like whatever and am perusing DreamHorse and FB groups for sales horse. 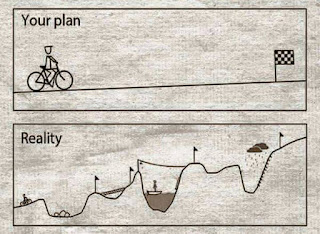