So Cinder had her vet exam last week, and while she's still NQR, she's also NQW aka not quite wrong. She was feeling a lot better after her bodywork and let the vet palpate her back pretty hard without trying to kill her, so yay! We did do a quick lameness exam and she was 0.5 lame on her left hind, high up. Flexing both the hock and stifle didn't really show much, so since the ultrasound was set up for another horse the vet popped it on her stifle for a quick view.

Stifle looked great so vet thinks her reluctance to get groomed could be a couple things. She either did something in the pasture or got cast in her stall and tweaked her back and it's just slow to resolve, it's her ovaries, or possibly hind gut ulcers. When the vet was palpating her, she hit an ulcer point and Cinder reacted hard, but the point can also indicate front leg lameness and Cinder had conveniently pulled a front shoe the day before.

We're going to do a round of treatment for the ulcers, and also did an electro-acupunture session that day. This was Cin's second time getting acupuncture, but her first electro session. She was pretty skeptical at first, but settled into and kept yawing and yawing. She almost fell asleep in the crossties, which is unheard of for her, especially as the barn was pretty busy. The vet did say Cin's left side wasn't pulsing quite as rhythmically as the right, indicating something was going on there and made her lean more towards the "did something in the pasture" hypothesis. I'm going to try and schedule more acupuncture sessions whenever the vet's out again as Cinder seemed to really like it. 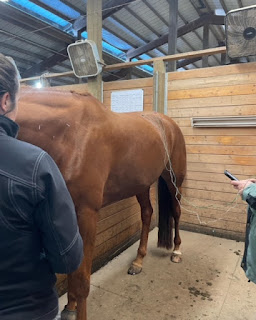 The weather has been super shitty this past week, either pouring down rain and windy, or freezing cold (and we even got snow at my house) so Cinder has gotten some light rides. She was still pretty pissy about her SI being touched on Monday, but it was 38* and I had a lesson right before dinner time. I had put her in my BOT quarter sheet for the first time but she was highly offended by it so we pulled it off and A wore it during the lesson. We just did w/t in my lesson but Cinder was really good.

First and foremost, it's now officially fall in the PNW. We had been enjoying an unseasonably warm early-mid October, till about 10 days ago. It went from 90* to 55* in the space of a week and from sunny and warm to windy/rainy/stormy in a day. And thanks to shifting wind patterns, the two days preceding the storm were full of wildfire smoke and the horses got a couple days off/easy days. So naturally, the day we could ride again all the horses were LIT.

And naturally, that was the day I had a lesson scheduled. The big h/j program (IL) usually has quiet days on Fridays, so A has taken that as one of her busy lesson days. But because of the smoke and IL gearing up for a month of shows, they were schooling horses that same day. The indoor was busy and as I walked Cinder in, her eyes got the size of saucers and she started to vibrate. There was no where I could lunge and because I don't have a death wish I called A who was up at the barn and asked if she could get on first. She agreed and spent the first five minutes trying to stay in the middle of the saddle as Cinder spooked and jigged around the arena. 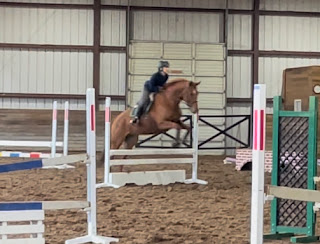 A just kept pushing Cinder forward, and started pointing her at fences to get her attention. Cinder did stop at the white vertical above (A got there on a shitty half stride and Cinder rightly said nope) and at the brick wall with no standards (first time jumping it and it caught her off guard) and at a short diagonal one stride that she was convinced was evil. She did get over everything on the second attempt, even though the one stride was a bit hairy.

I then got on and did some flat work before popping over some of the cavalettis set up. Because IL was still schooling horses, we couldn't change fence height (even though it was technically A's scheduled lesson time. I'm not bitter about that or anything, why do you ask?) but I still had a good lesson.

This lesson was eight days before what was supposed to be our last show of the season. Cinder had been a little grouchy when I tacked her up, but felt fine to both A and I under saddle. She had the next day off, and when I came out on Sunday she was even grouchier when getting groomed. Normally she loves to be curried and groomed; but that day she absolutely didn't want me to touch her SI/hips. A rode her the next day and said Cinder nearly took her head off when putting her blanket back on, but again felt fine under saddle.

After talking it over with A, we decided to scratch the show. Something was obviously up, even if Cinder felt sound. A did some easy stretchy rides with her during the week and on Friday she saw our bodyworker, L. L said that Cin was sore in her withers and SI/hips, and kicked when L first worked on them. But she settled down and was good by the end of the session. L thought the SI issues could be ovary/heat cycle related as Cin was showing signs of being in heat. Normally you can't tell when Cinder is in heat. She might have one flaming heat/squirting/winking/hussy attitude day a year, but otherwise, nothing. Cinder has been much better to groom/blanket after L worked on her, thank goodness!

The lameness vet is coming tomorrow at will look at Cinder and she's married to a breeding vet so if we need to, Cinder can meet him and get her ovaries ultrasounded.