My friend A, who used to lease Phoenix way back in the day, has a very cute little 4 stall barn with a couple pastures and an arena at her house.  She has one horse, and boards three older, retired horses.  She also takes lessons with my trainer. If she had had stalls available when I was moving, I would have gone there.

My trainer has talked about having me haul Peebs over there for lessons, or even just to jump on my own as A leaves a full course up most of the time and we don't at my barn. So before our last show I finally got everything arranged with A and trainer and took Peebs over for a lesson. Other than almost dying when Peebs thought about stopping at fence (see above and below) the lesson was a lot of fun and I made plans to go back the following week for another lesson. I'd forgotten how much I love A and her mom.


A's mom called me while I was at the show asking me if I knew of a horse that could give pony rides.  They had some family coming in from out of town with a few kids that wanted to ride.  A's horse can be a stubborn asshole and isn't exactly the pony ride type. I told her Peebs was available. He's been a lesson horse and I put my cousin's kids on him last summer for pony rides.  The plan was he'd stay at their place after my lesson for a few days while the family was in town then I'd take him back home. They have all the horses turned out 24/7 during the summer so they had empty stalls, and  a small dry lot paddock available for Peebs.

Our second lesson went really well again and afterwards I gave three of the kids pony rides while A had her lesson. Peebs was a little miffed about having to go twice, but was great for them. He settled into his stall there perfectly fine and I left after threatening to kill him if he hurt one of the kids. A took him out the next day for almost two hours of pony rides (just walking) since more family had come into town. She said he was good, if a little annoyed, but the kids fed him treats and watermelon, and spent a long time currying his itchy spots to make up for it. The last day the family was in town was one of the hottest days of the year and the relatives had to leave about midday.  So the kids and A got up at 5:30am to ride before it got hot and they had to leave. She let one of the kids ride on his own, aka she didn't lead him around, and once again Peebs was perfect. 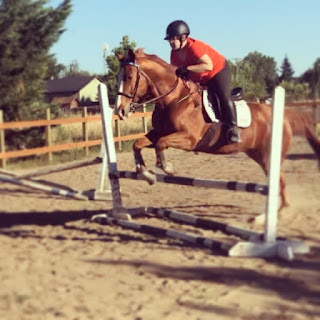 It was way too hot to haul him home that afternoon or the next day after I got off work.  I'm not putting a horse in a trailer in 95*+ unless I absolutely have to. A and her mom were fine with Peebs staying an extra few days.  I took him home on a Saturday morning but not before getting one last ride and jump school in.  We mostly just futzed around over the crossrails set up but it was so nice to jump without having to set everything up then take it down again after riding. I'm hoping I can get over there more this summer, either for lessons or just hacking!
Posted by outofashes at 2:27 PM 5 comments:

Two weeks ago I took Peebs up to the second in a series of 3 USHJA Outreach shows held by one of the local show management companies.  Originally I wasn't planning on doing the July show, just the June and August ones.  But since we did so well at the June one, and they're doing series champion and reserve awards, I decided to go.  We just went up for the hunters on Saturday, instead of doing the whole weekend.

Peebs hauled up like a champ and settled into his stall perfectly.  I was by myself again and it's so nice to have a horse I don't have to worry about. I gave him hay and water and he was happy as can be. I spent the morning watching some of the trot-a-course and 18" classes go before slowly getting Peebs ready. We had two over fences and an under saddle. They were running an open 2' division, the short stirrup, and the long stirrup all together for a total of like 35+ rounds.  I was scheduled somewhere in the middle of the group.


I did a little warm up w/t/c and when there was a lull in the warm up arena popped over a couple fences.  Peebs felt a little sticky; not sore or off, but stiff and behind my leg. I figured I would check where in the order my ring was, then do some easy walk trot work to try and loosen him up. But when I got up to check the ring, the woman working the back gate (not our usual woman who I love, but someone new and obviously it was her first time) was panicking because she didn't have anyone ready and there was going to be an open gate.  She asked if I was ready, almost begging me, and I panicked and said yes.

So needless to say, our first round wasn't great.  Peebs was still behind my leg, and I kept seeing the short spots and pulling for them.  What I should have done was galloped him forward but hindsight is 20/20. It wasn't an awful round, but definitely not what we're capable of. I came out knowing what went wrong, so when we went back for our second round I immediately asked for a more forward canter.  And I was really happy with the round.  We nailed all the distances, did one very nice simple change but otherwise got our leads over the fences, and it felt pretty darn good.  Except for the last fence. I had to move him up just a bit to the first fence in the last line, which was an easy 7 strides, and didn't realize till about stride 5 that I had too much horse for the 7, but not enough for the 6.  I did sit up and shorten him, but that 7th stride was basically a chip. Oops, sorry Peebers.


After our over fences rounds we had an almost two hours till the flat. I pulled his tack and let Peebs have a break while I chatted with people and watched more rounds go. Our flat was nothing special, but he didn't break or canter when we should have been trotting.  We got a 5th out of 6 for it, which I was fine with.  He's not a hack winner. Continuing with the theme, we got got 5ths in both over fences classes. I thought the second round would have been placed higher, but oh well.  I knew what mistakes I made, and what to do next time to fix them. Can't wait till the end of August when we'll be there again!

The Rest of the Story

I have so much catching up to do, but this post has been in the back of my mind for a while now so you get it first.

At the show in June I was stabled across the aisle from Trainer BM.  Peebs' breeder rides with BM, but wasn't at the show. She had mentioned to me once that BM had had Peebs for a little bit, back when he was 5 or 6.  So during a break from showing, I walked over and introduced myself to BM and his client GK. We ended up chatting for a while and both BM and GK were super friendly.  And at the show last weekend (post is coming) I was stabled on the same aisle again and we hung out and talked more.

BM gave me lots of info on Peebs' life from age (approximately) 5 to 7.  Peebs' breeder sold him at 4 and I know the barn I bought him from got him at 7.  But I didn't know much about those in between years.  I know someone beat him and made him terrified of crops and lead changes.  I know his teeth never got done.

BM had a junior client who was leasing Peebs and both client and BM loved him.  BM said he had started lead changes with Peebs, and that he remembered you had to shove him over to get the left to right.  Which is his hard direction. Peebs was put up for sale and BM tried to get his client to buy him, but they didn't have the money. He got sold to trainer JR (oddly enough JR was Tia's breeder and she and I have talked at shows about Tia. #itsasmallworldafterall) and her teenage daughter BR took him on as a "project".  BM flat told me that BR was the one who ruined him with lead changes.  Said she would go right to the whip and spur and smack, smack, smack him for it. BM was riding some for them and they asked him to get on Peebs and he said he almost didn't recognize him. He had gone from a nice quiet hunter to going around completely inverted and panicky. He's such a chill horse about 99% of things under saddle except lead changes, that I can't imagine what she must have done to wig him out.  After having him for over 2yrs we're just now able to start schooling them without him freaking out. And it took me almost a year for him to be ok with a tap from my crop.

Peebs was sold by JR to the barn I bought him from, and they had him for about two years.  JR messaged me last week asking me about Peebs and Tia.  She said they had loved him, and was glad he had a "soft landing".   I'm glad I got the rest of his story and was able to fill in the gaps.  I know I shouldn't be mad that she let her daughter screw him up and then pass him off, but I am. I'm eternally grateful that I got him, and he's going to stay with me forever but I can't help but feel angry at them.
Posted by outofashes at 2:41 PM 2 comments: