I have fallen behind on my saddle fitting recaps, but I'm going to try and remember what happened. The Voltaire rep did in fact keep her appointment and we ended up trying three different saddles that day. She did want me to try a fourth, their monoflap, but since I want to focus on the hunters and eq with Cinder, monoflaps aren't going to work. I'm sure for schooling shows I'd get away with it, but I know at rated shows that would be a big strike against us.

I ended up liking the Voltaire Palm Beach. The Stuttgart felt like it put me in the back seat, while the Palm Beach felt much more balanced and my leg fell perfectly into position. We also tried the new Essential saddle, which is a semicustom, interchangeable gullet saddle. Basically, it comes with a narrow, medium, and wide gullets, and you can pick your seat size and either a short, medium, or long flap. I didn't like it, felt like it put me in a chair seat, but it was a 17" seat while I usually ride in a 18" so that could have part of the issue.

The rep did note that Cinder is deceptively wide, especially through her shoulders and since she's still filling out, will most likely need a flap modification for her scapula. For Voltaire saddles, the rep recommended their Fin panels, instead of the Pro panels. All the saddles she had that day were Pro panels, so I couldn't see what that Fin would look like on Cinder. I did find a used Palm Beach with Fin panels in a 17.5" and a short flap, so I'm taking in on trail. Should be here Monday.

In the mean time, I'm borrowing friend A's old Crosby Equilibrium saddle. It's a narrower than my County, and Cinder seems to like it currently, so yay! It's not a great fit for me, and is slicker than snot, but if works for Cinder I'll make do.

Starting my saddle fitting journey with Cinder was a bit intimidating. I had no idea what would and wouldn't work for her. I don't live in a big city/suburbs with brand reps/saddle fitters/tack stores so I can't easily try a bunch of saddles quickly. I did find a used Devoucoux Socoa in my seat size and flap length within my budget online, so I took it on trail.

Yeah, that's a no. My County fits much better than this one did. I didn't even bother girthing it up, let alone riding in it. Back to seller it went.

Fingers crossed, the Voltaire rep is coming this Saturday. I tried to get her to come out when I was saddle shopping for Peebs, but she blew me off twice. This time Trainer A set up the appointment for me since she's sponsored by them so hopefully the rep actually shows up. When I was shopping for Peebs I had the money to drop on a new custom saddle. I don't currently, and wouldn't since Cinder isn't done growing and I know whatever saddle I get now won't last more than a couple of years, but it really pisses me off that years ago I couldn't get a response from this rep even though I had $$$ to spend, but now that I have a trainer behind me she'll come out even though I'm not dropping the big bucks. I shouldn't have to have a trainer to get a response from a rep.  I know I'm not going into this fitting with a good impression of the rep, so I'm telling myself to keep an open mind. And who knows, maybe she'll flake on me like she did years ago.

Things are at a bit of a pause at the moment. Cinder came home after the show and got a few days off. She also got her teeth done, a cap popped, and her spring shots. I rode her last weekend and she was good, if a bit sore.

I knew my saddle was a bit wide for her, but with the Mattes half pad I could shim it and make it work. For the show, I didn't even think about it, and used my regular shaped pad. It didn't give her as much wither clearance and she was a sore the day after the show. That soreness was still apparent last weekend, and this week. 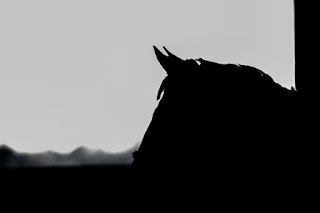 It's very clear that it's time to start shopping for her own saddle. I have one arriving today to try, and Trainer A (who is sponsored by Voltaire) is seeing when she can get the rep down to measure Cin for me. For now Cin is getting introduced to the BoT sheet and has the chiropractor coming next week. Pray to the saddle fitting gods we can find a saddle that works for both of us relatively quickly and cheaply. She's still got a lot of filling out to do and I'm 100% certain what works for her now will not work in another couple of years so I'm really hoping we can find a used saddle that will work for now.

Peebs is still very lame. Even on the Previcox he felt off. We have an appointment this afternoon with my vet, but I'm thinking it's time to let him be a pasture puff for a while. He's been on stall rest/walking/little bit of trotting for 10 months now and I feel horrible about keeping him locked up. We could do more in depth diagnostics, but if after 10 months he's not any better, what's the point? He deserves to just be a horse. Hopefully six months to a year in pasture will help, but if not, he's more than earned his retirement.

The Rest of our Spring Show Season

As I'm sure most of you have heard, there's an EHV-1 outbreak on the West Coast. So far it's only in California, but I know of at least five Oregon barns that were showing at either Thermal (ground zero) or Rancho Murieta and have subsequently been exposed. I sincerely hope none of the Oregon horses got it and brought it up here, but if Covid has taught us anything, it's that viruses can travel very easily and  people are fucking stupid.

I was toying with the idea of doing a schooling show in March, but I've scratched that idea. The people running the show were showing down at Rancho Murieta and brought their horses home to quarantine. Then two days later sent an email saying their still planning on having their show. Oy vey. 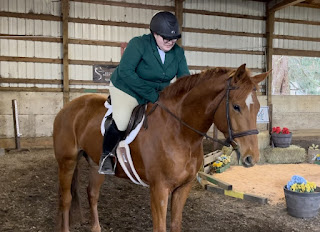 To be fair, the show is being held at a different facility than their home barn, but this program typically brings a lot of clients to their shows and since they're "quarantining" the horses that were in NorCal at home, I have my doubts about their biosecurity and the health of the other horses on their property. Two weeks of quarantine is the minimum recommended, and in some cases it's 21 days, so having a show 18 days after your horses got home is cutting it very close.

There's a couple different shows in April that I was debating going to, another at the place we showed at last week, and another in a different venue as the people hosting the March show. Time will tell if April shows will be a go or not, but if we have to skip another month of showing, so be it. My horse's health is way more important than a horse show.

Cinder made her hunter and equitation ring debut last Saturday. The show series we did last fall added some hunter and medal classes to their prize list for this year, and since the facility is only about 15mins away from A's training barn, we figured it would be a good way to end Cinder's month up there.

We signed up for the 2' hunters and the 2'3" medal class. Our classes were the last of the day, which was nice because I could sleep in. The show manager had sent out an email with class counts and approximate start times and when we pulled up to the show, they were on time. That's a first for a schooling h/j show!

I hand walked Cinder around the indoor (where we would be showing) while the last of the jumpers schooled, then tacked her up. Unfortunately as we were walking to the outdoor to start warming up, they brought out the drag to drag the indoor. It made a huge grating sound along the ground behind us, and both Cinder and I spooked hard at it. I lost my nerve and asked A to get on to school Cinder first. She did (bless her) and said Cin was a little jazzed, but once she put her to work she settled down. Once the indoor was open for schooling A took her in, and other than a little gawking Cinder was fine. I got on to jump a few things and then it was show time. 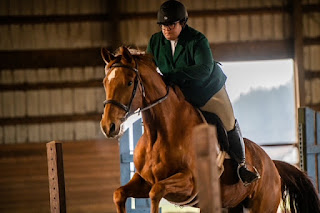 Our first round was our best. Cinder was a wiggly to the single diagonal off the right (the above fence) and tried to slowly duck out, but I pushed her forward and we got over it. The second round had a four stride bending line, that on paper looked doable, but in reality wasn't. We went first in both rounds so I got to be the guinea pig. I mean, if I had really angled the first fence and bent the hell out of the line, it was possibly doable. I did not do those things and ended up circling. At the end of the round the judge called down that the line was not ok and once they moved a fence out a bit, offered me a reride. We were able to make the line this time, but unfortunately had a rail down at another fence.

There were six of us in the division and for the under saddle the judge had us all trot together, then split us for cantering. I was very happy with that decision, as there were two kids on ponies with questionable steering and the arena was small. Cinder was a little more up in the flat, not dropping her head as much I would have liked, but handled it like a champ. There were two very nice horses that I was sure would place above me, but we ended up second! 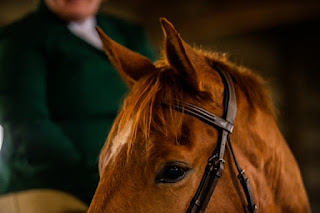 We went first in the medal and I could tell Cinder was tired. She held it together pretty well, except she pulled the wiggly/run out move again and this time I had to circle. It felt like an "I'm tired, do I have to?" stop, and once I re-approached and really put my leg on, she was fine. Once we were done I hopped off and since it had started to rain we untacked quickly and put Cinder back on the trailer. I figured I wasn't going to be called back for the test with a stop, and I was right, but when I went back to get ribbons, they were doing pictures and kept asking me if I wanted to bring Cinder out. We ended up fourth out of six for all our over fences classes. 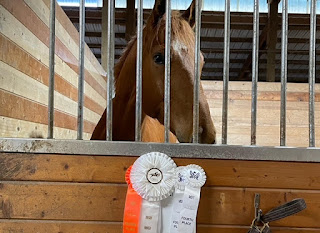 It was a great first outing and first hunter/eq ring experience. I'm so happy with how well both her and I handled everything and can't wait to get back out in the show ring.