I'm happy to report that Peebs has seemed to have settled in very easily.  He's quiet in his stall, takes everything in stride (except the neighbor's new boarder's weanling), and I'm still in love.  We had a spa day last weekend and clipped up his legs, face, and bridle path, and washed his legs, tail, and butt (he gets runny manure when switching hay). So far I've learned that he's not a fan of having his ears clipped, likes to walk way as you're mounting, and is completely and utterly distracted by said weanling.  At least with the weanling all he wants to do is stare at it longingly and doesn't loose his shit when it runs around like a certain black TB mare would have.

We had our first lesson last weekend as well and as my trainer put it, "Honeymoon's over, time to get to work!"  I've been in a "It's so nice to have a sane trained horse, let's just bop around la, la, la, la, la!" mood. But Peebs needs some polish with his flat work.  He's lazy, and wants to revert to lesson pony mode, and I've learned I need to at least have a crop and sometimes I need to use it. We worked on getting him forward in my lesson, especially in the canter. We also need to work on upward canter transitions, especially to the right, as he likes to trot super fast into them. 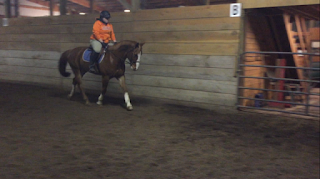 I had the chrio look at him yesterday, and while his back and hips were tight his neck was a mess.  His musculature is completely upside down and the base of his neck was way out of whack. But the chiro thought that with consistent, correct riding he should be fine in no time.
Posted by outofashes at 2:52 PM 4 comments:

First off on the name front: After a couple days of having him I don't think Paddy fits his personality.  I'm taking a little bit to see what I call him consistently before ordering a name plate for his halter, but already I can tell it's not going to be Paddy.  So far I'm leaning towards PB or Peebs.   And I'm open to suggestions on show names.


It actually looks like I'm going to get away with not having to buy much in the way of new tack for PB.  I guess that's the plus side to having three horses at once who all wore different sized boots, blankets, and girths.  The only things I know I need are new open fronts, a new halter (ordered) and nameplate (once I decide), gallons and gallons of whitening shampoo, and a new stable sheet.  PB and McKenna wear the same size blankets but I don't think McKenna's pink stable sheet will look good on PB.  He's not exactly a gelding that can pull off the pink.  It's not a super critical purchase, he can wear what I have and just look bad for now, and hopefully in the spring I can get a deal on a new sheet when everything goes on sale.

While McKenna and PB are also about the same height, the mare being 15.3 and him being 15.2, they have substantially different sized legs.  The first thing my vet said when he came to look at PB was "Good bone."  Peebs' has that good stock horse bone for sure!  My medium EquiFit boots just barley fit so I think I'll be looking for a large sized pair.  This is a little more of a "need to buy soon" item since I prefer to jump with open fronts, but he can wear polos for now.
And what's everyone's favorite whitening shampoo?  Buddy had a couple socks but was very good about keeping them clean so I didn't have to do much in the way of extra washing for them.  But Peebs' has much more white and I can already tell I'm going to be washing those stockings a lot more often.


I decided to go with bachelor #1.  When riding him I felt so safe and at ease, something that I haven't in so, so long. I've ridden for over 22yrs and I know what I like and what I don't. I'll take safe and sane over fancy and flighty any day. 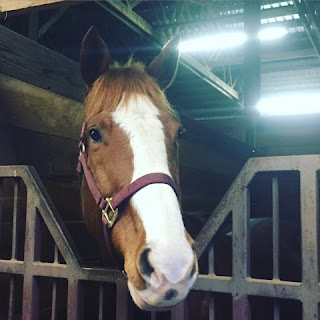 His name on the ad was Push Button, aka PB, both of which I wasn't supper fond of. But when I went to pick him up they said they also call him Peebs, Paddy, and Paddington Bear. I know there's already a Paddy in blogland but I like it and think it suits him. I'm thinking Paddy for his barn name and either Sir Paddington or just Paddington as a show name.

The day after falling in love the chestnut I headed back up towards Portland to see a horse my friend, KP, has for sale for a client.  He's an 8yr old solid bay paint that has been a pleasure horse.  My friend used to jump a lot but has started training more for the pleasure/open show circuit than the h/j.  She had posted G for sale and seeing how cute he was, I asked if she had ever jumped him.  She said no, but she could. She texted me back a few days later saying she had jumped him a bit and he was totally chill and more than willing so I agreed to go look at him.

When I got to the barn KP was talking to a client but pointed G out in a paddock and I went to go get him.  He willing came over to the gate, but once I tried to pet him his ears went flat back and he snaked his teeth out at me.  Apparently he can be a bit defensive about his stall/paddock and it gets worse at feeding time.  He was fine when I led him in and fine while we groomed, but I could help but be a little put off by the initial snark.  His owner stopped riding (why he's for sale) and I guess he got snarkier the more he sat.

KP got on him and you could obviously tell he was a pleasure horse.  Not quite a peanut roller, but close even though he was willing to move out. He hasn't figure out contact yet, prefers to go with the pleasure horse loop in the reins.  Over the little cross rail KP had set up he wasn't sure what to do with his legs but gamely trotted and cantered it, getting better each time. He was very comfy to ride, smoooooth gaits and light off your aids.

But the biggest mark against him was an old rope burn/scar along his pastern. They think he had been roped and dropped to ground at some point. He needs front shoes to help support that leg, and both my trainer and I don't think he would stand up to being jumped.  I'm not opposed to getting something that green over fences, especially with a good mind, but not being sure how high he could go and with an old injury like that, and the snark, G is not the horse for me.
Posted by outofashes at 10:57 AM 5 comments:

My BO and I went up Friday night to look at potential pony. My trainer wasn't able to make it, but I'd like to think that I'm capable of doing a first ride and figuring out if it's worth coming back for a second try.

PB is a 9yr old 15.1 hand appendix QH. He's been used as a lesson horse for the past few years. He seems like a solid citizen; knows his job, goes along quietly enough but could use a little polishing up. 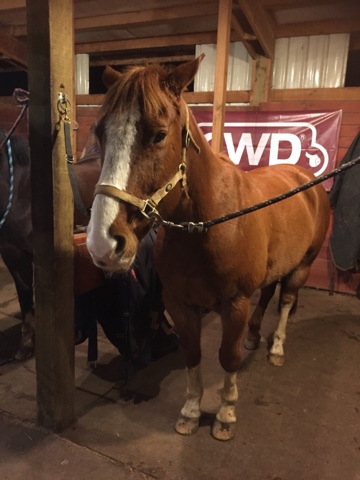 The girl who rode him mostly left him alone and he just bopped along. Cute trot, nice rhythmic canter, nothing super fancy but cute and steady. She didn't ask him for much flexion or lateral work. She popped him over a few fences and he looked cute and seemed happy to jump from either the short or long spot. 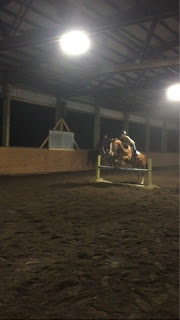 I got on and just let him go around for a few minutes before I started asking for more. He's pretty stiff left, and likes to go with his nose poked out but was willing to drop his head and round up when asked. I took him over a few fences, probably only 2' but he waited to fence when asked and easily took the long spot when I couldn't see the distance.

The main thing I loved about him was that he felt SAFE. I never felt like he was going to take off, he never got strong or bold, and I felt comfortable on him.

We've asked about a trial, and are waiting to hear back. I know I need to look at other ponies (and rode eligible bachelor #2 today) but PB's a strong candidate. But part of me is worried that the reason I like him so much is just that I finally felt comfortable on a horse again, and it's not just him. Guess we'll just have to wait and see.
Posted by outofashes at 8:25 PM 8 comments:

First off, big THANK YOU to Tracy for hosting the 3rd annual Blogger Gift Exchange!  Its so fun to find new blogs and shop for other people!!

When I came back from my vacation to NorCal on Sunday, it was to a lovely mix of below freezing temps, ice, and freezing rain.  Because I'm considered essential staff at my job I still had to report to work at 7am Monday morning even though the university wasn't opening till 10 am.  By 8am we got the word that the university had closed for the day and my boss gave us the ok to make sure the essentials were done and to get on home. When I got home around 11am I stopped to check the mail since I hadn't all week when I was gone.  I was happily surprised to see my Blogger gift waiting for me!  Made the frozen morning much more bearable!

I received a lovely gift from Julie at Kickin' Sand in the Croatan!  There was a lovely card inside, and don't worry Julie about it being late I was on vacation anyways!  I loved the wrapping paper and that she had even bound everything together.  It seemed so professional!


Inside all the lovely paper was a pretty horse head pin, quite a few pairs of boot socks, and a copy of Modern Farmer magazine. I'm thinking the pin will go on my nice, non-barn coat so it doesn't get dirty.  I love the fun socks, and they'll be perfect for the new tall boots I got myself as "Yay you gave away sold McKenna" present. Once I've caught up on sleep (going on vacation wasn't nearly as relaxing as I thought it would be) I plan to have a comfy night on the couch with some hard cider and the magazine.

Thank you again for the great gifts Julie and thank you Tracy for hosting!!