I got the call that no horse owner wants to get Tuesday afternoon.  Phoenix was down and thrashing. I flew out of work, called my regular vet, and tried to think positive thoughts during the 45min drive between work and where Phoenix lived. 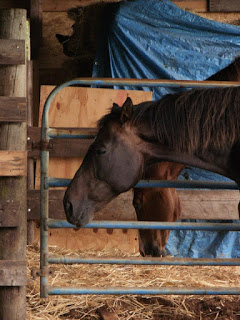 Phoenix lived with my dental vet, PO, but it was her husband who found him down.  PO wasn't at home but he called her after calling me.  Husband isn't a super horse savvy guy, but he knows enough.  He got Phoenix up and walking while waiting for us to get there. 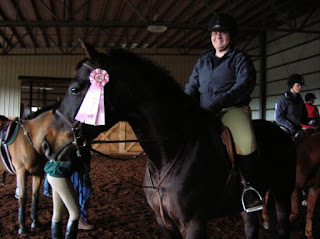 Once I got out to their place, I knew.  Phoenix looked absolutely miserable, covered in mud and sweat, shaking, thick green snot in both nostrils, straining hard to poop, and his breathing sounded like a rattle. PO got home just after I got there and while she's a vet, she only does teeth so she didn't have all the supplies to treat him.  My regular vet who was on his way said it was fine for her give him banamine so she did.  He was so dehydrated that it took her multiple tries to get his vein. We then put a sheet on him, as it had started to rain, and walked him for the next 20mins till my vet showed up. 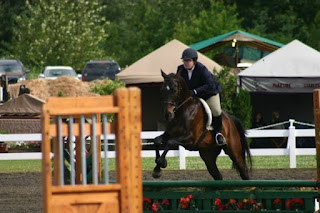 After examining Phoenix, my vet wasn't optimistic.  He did give him more drugs and tubed him and left us with the instructions to watch Phoenix and call him back if things got worse.  PO's husband brought folding chairs out and we sat in the run next to Phoenix drinking beer and waiting.  Even with a full dose of meds on board, he never stopped straining and the spark never came back to his eyes.  I went in to his stall a few times and cuddled and talked to him but he never acknowledged me.  Phoenix was always the biggest attention whore in the barn.  He would leave food to come over for kisses and scratches, would hang his head on your shoulder while cleaning stalls, and generally loved to be around people.  There was absolutely no evidence of that.

After talking with PO and working myself up I finally called the vet back after about an hour. We talked about how Phoenix wasn't a surgical candidate, but that I could take him to the OSU vet school and put him on fluids and see if he got better.  Both my vet and I agreed that doing that would most likely only postpone the inevitable, and I didn't want Phoenix in pain any longer, so he came back.  Normally my vet is advocates fairly strongly for doing everything possible before putting a horse down, but not that night.

He went down peacefully and I was able to hold his head and thank him for being my best friend for the past 10 years. I was incredibly humbled when PO said that they would bury him in their back pasture, next to two of her horses that have passed. After my vet left PO, her husband, and I went into their party/game room where they have an actual full bar that used to be in a restaurant and drank some more while reminiscing. Phoenix had only lived out there since January, but they loved his as much as if he was their own. 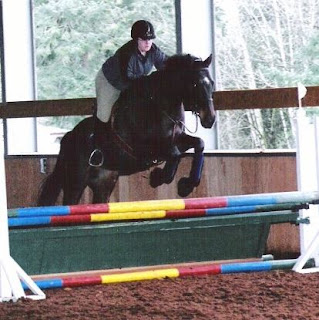 The past few days have been hard and I haven't slept much but I'll be ok.  I had a long visit with my BO who had been gone for two weeks the next day and then yesterday some other friends took me out for dinner.  I've mostly stopped crying when I think about him, expect for writing this. I'm sure it will hit me at random points, but that's ok.  I'm just happy that he's out of pain.
Posted by outofashes at 12:01 PM 11 comments:

Continuing in the "just do it" mindset, I've sent in an entry for McKenna's first show. Right now we're just entered in two trot pole classes. But if all goes well and we don't completely loose our shit I'll add a cross rail class or two.
My trainer may or may not be able to make it but my BO's dressage trainer BS is taking her gelding, who seems much happier as a jumper than a dressage horse. We're going to haul up the day before and school the ponies as it's the gelding's second jumper show and he's still green. So if McKenna kills me I'll have someone to haul us home! 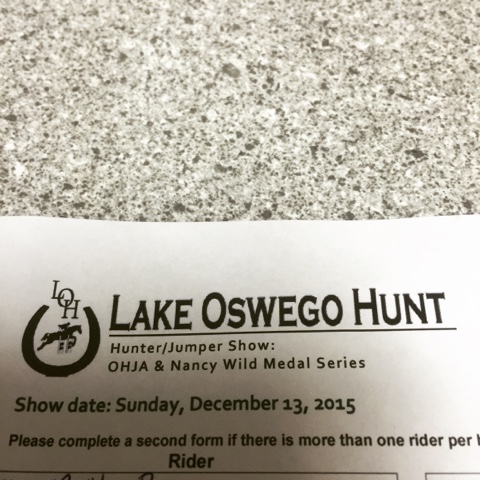 Just do it's been my theme for the past month. That and "long, active legs". I don't know what it's coming from but I've been more motivated (for the most part), more confident, and more committed to getting baby McKenna trained.

We had a dessage lesson with TS and that's where the long, active leg came from. McKenna loves to hang on my right rein and blow off my right leg. I got dinged in the lesson for holding too much with the right rein (hence why she loves to lean on it, funny how that works) and being too nice with my right leg. I wasn't supposed to completely drop my right rein, just give and release every few strides. Once I got the more right leg thing into my head McKenna seemed to really respond just need to make sure my heel is down when I'm getting after her. Still working on the whole holding too much with that rein though.

We've only had one jump lesson lately, and while it poured rain and we were forced inside, it actually was a pretty damn nice lesson. I had set up a baby grid a few days before the lesson, a cross rail one stride to a pole one stride to another pole and taken McKenna thru it. While she got a big rushy she handled it well.

For the lesson trainer set a one stride starting with two cross rails. McKenna decided that the baby grid was super exciting and we didn't have brakes coming out. She got run into the wall a time or two to remember how to stop after the fence but as soon as trainer raised the second fence to a vertical she was much more calm and relaxed coming out. 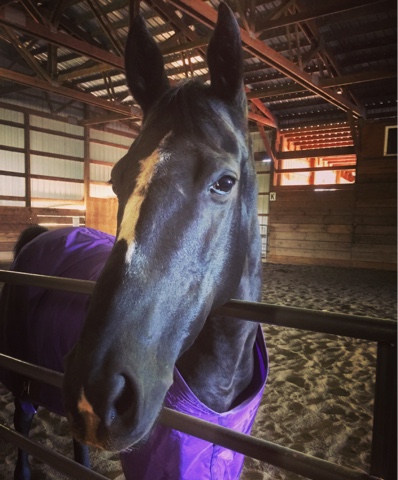 Trainer kept raising the second fence and then made it an oxer (McKenna's first under saddle!) and then raised it more. We ended up with a solid 2'9" oxer coming out. McKenna did rub it, but considering it was at the end of the lesson and she's never jumped that high or an oxer under saddle before I was super thrilled with her. She never once hesitated thru the grid, jumped everything easily, and once the fence went up she was quiet and manageable on the off side. Almost makes me want to rethink selling her.