Since my last post on Peebs over a month ago (whoops bad blogger) he had continued his upward trend on remembering how to horse after a fall/early winter of rehabbing. We were jumping small fences, working on the connection, and building up his muscle and stamina. Then I decided that he could be moved into the big pasture with fresher grass (not that the grass is really good right now, but this pasture hasn't had horses on it since June of last year) instead of his regular, grazed down pasture.

Peebs went from his normal fairly lazy, mostly unflappable, friendly self to a cracked out, spooky rage monster bully. He played hard to catch in the pasture when normally he's first in line at the gate at dinner time. He was spooking at everything, humans walking down the driveway, the neighbors dog, ghosts only he could see. He was belligerent under saddle, throwing his head around, pushing against all my aids, and just generally not fun to ride. Even longing him didn't seem to help; he was tired, but still felt wired and frazzled.

It took me a few days of panicking that he was ulcery to realize that the change coincided with his move to the new pasture. He is on a really good GI supplement, Purina Outlast, has 24/7 access to turnout/pasture (even if it mostly grazed down), fed nice quality Timothy hay and hay pellets. He'd also gained weight. So ulcers didn't seem super likely. The most likely culprit was the fresh pasture. Apparently Peebs turns into a toddler who just ate an entire birthday cake with a gallon of Mountain Dew when he's on fresh pasture.

So he got his big pasture privileges rescinded and is back in the smaller, grazed down one.  And not even a week off pasture he's feeling much more like himself. He's still a little buzzy, but is able to focus, and put in some good work. We've even been able to return to jumping and his brain hasn't leaked out of his ears. So note to self: no fresh pasture for Peebs. Only grazed down, older grass for him from now on.

We had a winter storm roll through starting last Thursday.  My house (and Peebs) were at the southern edge of the storm, and we got a little ice Thursday night, rain Friday which froze that night, plus a little more ice Friday night. There were some downed trees, and some people without power but all in all it wasn't that bad compared to the rest of the state that got hit.

TCF has a bunch of downed trees, and the summer pasture fence got almost completely taken out on the north and west sides. Thankfully, the winter pasture only had a few downed branches in the middle of the field and the fences were fine. Sunday the BOs, friend A, and I spent the morning chopping branches and hauling them out of the field.

Cinder's barn wasn't so lucky and got hit much harder than I did. They lost power on Friday, and still didn't have it back when I when up on Tuesday. I'm not sure how much ice they ended up with, but it was a lot. They had a lot of downed trees, and limbs. The BM sent out a text Saturday asking people to not come out to the barn. Between the ice, downed trees and power lines on the roads, and no power at the barn, she said it wasn't worth it and that all the ponies were fine and tucked in their stalls with extra hay.

Needless to say, we scratched from the show on Sunday. Trainer A called it Friday night when she went to start loading the trailer and the tack room door was completely frozen shut. A little schooling show isn't worth trying to haul in ice.

Fingers crossed that's the worst of it for this winter, but who knows!

Second Verse Worse than the First

I got my second COVID vaccine a little over a week ago. And oh boy is the second dose worse than the first. About  4-5 hours after getting the second dose, I started feeling sick. Fever, chills, body aches...the basic flu symptoms.

Thankfully I had gotten my shot on a Saturday afternoon, because I was pretty much bed bound for 24hrs. Getting up to go to the bathroom was exhausting, but I was so hot I couldn't sleep. Even taking the max amount of nsaids, my fever peaked at 100. Luckily I didn't have any nausea or vomiting, so I was able to stay hydrated and eat a little bit with my nsaids. Two of my coworkers spent the night vomiting, and my supervisor wasn't able to keep anything down for over 24hrs.

My fever broke almost exactly 24hrs after it started, and I was able to sleep that second night. I did go into work Monday morning, but just did the essentials and went home after four hours because I was exhausted. By Tuesday, three days post vaccine, I felt fine.

Obviously having 24hrs of symptoms is way, way better than getting COVID. I do recommend that you take the day off work after getting the second dose, and if you have pets/horses to care for, have someone around to help.

I got the video below from Trainer A over the weekend and I'm still amazed that that's my horse in the video. I hate to sound like a broken record, but Cinder is so awesome. A called her a natural, and says she has a blast riding her.

We also may or may not be taking Cinder to her first show under saddle this weekend. There's a little h/j schooling show about an hour south of me that A is taking a couple of students to and Cinder will go along. The only issue is a threat of snow/ice between now and Sunday. Where I live, and where the show is, is supposed to just get rain, but Cinder's barn is a little farther north and could see a wintry mix. If the weather/roads are bad, it's not worth it to try and haul out.  Fingers crossed for rain only and a happy first show!!

I got off of work early on Friday to go up and watch Cinder again. Trainer A had said she had been a bit wild earlier in the week, but didn't seem to concerned by it. We had had some really weird weather with some unexpected snow on Tuesday (3" at work, but just a trace amount at my house and at Cinder's barn) and Cinder had moved into a new pasture. A chalked up Cinder's wildness to winter sillies.

The great romance of Cinder and Kiwi has come to an end. The two of them were starting to get annoyingly attached to each other so Kiwi was moved to a different stall and Cinder to a different turnout group. Cinder's new turnout includes some older mares and sheep. Apparently she spent the first day trying to befriend the sheep but they weren't having it. The pasture she's in also has the barn's cross country jumps in it so she's seen them and hopefully once the pasture is dry A can take her over them. 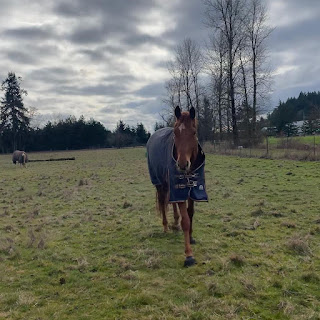 Cinder was all business under saddle on Friday. Since it was dry the barn had opened up the outdoor dressage court and A rode her out there. She's been ridden out there a handful of times and only once thought about jumping out of the court. Someone slammed a gate and she spooked sideways but kept herself from going over the rails. A has also taken her on her first road hack, walking up and down the gravel road and said she was really good. Cinder had to stop and stare at the neighbors cows, and the water coming out of a culvert into the ditch along the road, but didn't spook at anything and was able to do most of it on a loose rein.

Cinder keeps looking more and more grown up and I can't believe the difference in her in just a couple of weeks. She's still obviously green, but she's staring to develop some nice rhythm and stretch in her trot. Her canter is still big and ungainly, but she's getting more and more comfortable in it, and her steering at the canter is much more improved. There was one spot in the arena that was a little too wet for her liking and whenever they passed by it she would giraffe her head up and get quick, but a couple of strides later would settle down again. I told her to stop being a princess and that she lives in western Oregon and is going to have learn to deal with wet footing.

A and I are tentatively planning her first outing in March. A is taking some of her students to an indoor eventing show and Cinder is going to go. Right now A is still deciding weather she wants to actually show her, or just take her to school. A thinks she'll be ready to handle the intro division by then. We'll probably enter the intro, and then see how she handles the atmosphere and schooling. If we have to scratch the actual show, oh well. Just going will be good exposure for her.