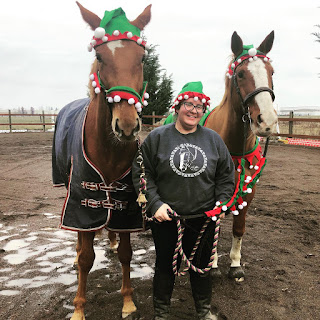 Merry Christmas from me and my elves!!! 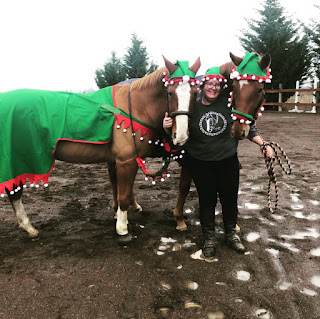 Email ThisBlogThis!Share to TwitterShare to FacebookShare to Pinterest
Labels: Christmas

My job revolves around animal care, rodents in particular. Mainly mice, but some rats and the occasional hamster. I've also worked with llamas, alpacas, dogs, barn owls, chickens, pigs, quail, and ducks. But 95% of my job is mice. Cleaning cages, handling mice, treating mice, collecting tissue/fecal/blood samples, etc. So, obviously, I'm around mouse poop a lot and it doesn't bother me. Until yesterday.

The barn Peebs is at has a mouse problem. I've seen them, they've chewed into my SmartPaks when people leave the drawer open, I've see there poop. But last night when I went to grab my gloves out of my helmet, which hangs on a hook on my saddle rack, I noticed mouse poop IN MY HELMET. Disgusting. I then had to take everything off my saddle rack and inspect it.

My new BOT quarter sheet had some poop on it, but it brushed off easily enough. But the biggest issue, besides my helmet, was my Mattes half pad.  Not only did it have poop on it, there was evidence of chewing on the sheepskin. Can't say I blame the mice, it makes great nesting material. But my half pad! I'm also terrified my saddle's going to get chewed like Cob Jockey's old Wintec did. It's currently swaddled in covers and my helmet (minus the liner, that's in the wash) and half pad are in my tack trunk.

I'm going to have to have a talk with the BO about getting tougher on rodent control. I saw her saddle had some mouse poop on it, but she either hasn't seen it, or cares about it. At least I'm well versed in mouse psychology and know lot of tips and tricks to catching the little bastards.

It feels like I've been spinning my wheels a bit this fall. Work has been crazy and won't even back out for another month, I was gone early in November and then again at Thanksgiving, and with the ponies at two different barns I feel guilty spending more time at one barn than the other. Granted Cinder is two, turned out 12hrs a day, and her only job right now is eating and pooping. Peebs, on the other hand, has been either super hot and spicy (for him) or super lazy and convinced he doesn't know concepts like bending or riding with contact.

I think part of Peebs' issue was moving barns.  He went from 24/7 turnout to maybe 4hrs of turnout a day, and now that its started raining, the pastures are closed and he's in 24/7. Also GS switched hay from the local grass they used to feed to Eastern Oregon orchard grass, which is a lot richer. I've always had him on plain grass, and he just felt like he was vibrating out of his skin on the orchard. Peebs had diarrhea almost constantly from the orchard so I went out and bought my own grass hay for him. Diarrhea stopped, and a much more saner Peebs is back.  He's also an air fern and got very rotund on the orchard.

I finally had a lesson this weekend, after about a month.  I had asked for a flat lesson as Peebs and I had been having issues, see above. We did have a CTJ last week when I had to borrow a dressage whip, but Peebs did remember he knows how to get off my right leg and that he can go on the bit. Our lesson went a lot better than I was expecting; I was able to get Peebs to soften and listen to my aids quicker than I thought I could, and from there we worked on more refining the aids rather than big asks. My big take aways were watching his right shoulder tracking left, and to always feel like I'm pushing him out tracking right. And if I feel like I'm working too hard, grab the dressage whip or put on my spurs.  He knows what I'm asking for, I shouldn't have to nag him.

Happy gotcha day Cinder!! I can't believe two years ago I picked her up from her breeder. She'll get stuffed with cookies tonight to celebrate. 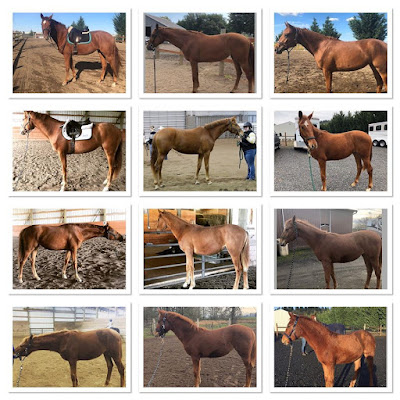