Buddy was foaled in Corvallis, Or in 1997, only about 15 miles from where he currently lives.  He is by an APHA black/white stallion, Ima Black Jaguar, and out of a palomino AQHA mare, Gamblin Poker Chick.  Buddy is a registered solid bred APHA; he's black with rabicano ticking and has white on his tail head. His registered name is Slick Jaguar, but I show him as One Bud Wiser. 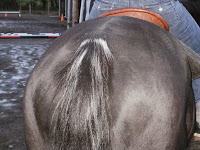 He was shown in halter as a youngster, then started to be a rope horse.  He was sold a few times, as a head horse for team roping.  I know he's won money at ropings, but I don't know how much.  My barn owner Connie bought him as a rope horse from her former farrier, in 2007.  When she got him, he was a horrible head tosser, and you could barely touch his mouth while riding.  A short time later Connie found out he had reared up and gone over backwards with his former owner more than once. She put him in training with a local cow horse trainer, and it helped immensely.  While in training Buddy worked cows, mainly doing team penning and ranch sorting. 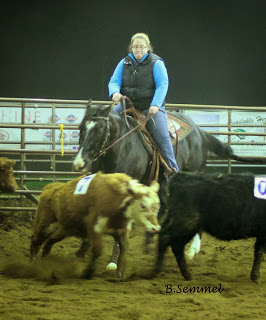 When Buddy came back to our barn, Connie started doing dressage with him.  She has a strong dressage background, and puts dressage basics on all of her horses.  Buddy seemed to like going English, and has nice movement for a little cow horse.  One of the girls in the barn started riding Buddy for Connie, and started him over fences.  Buddy seemed to like jumping, and has a natural eye for finding his own distances.  He went to a couple little shows, and did well.  During this time, Connie was still roping on him, working cows, and taking him camping.  Buddy earned the nickname "Wonder Pony" in the barn, since he seemed to be able to do it all.

The girl who was jumping him moved away, and for a year Buddy didn't jump. I started riding him in April/May 2010 while my TB gelding Phoenix was rehabing. I had lost a lot of confidence over fences with Phoenix, so it was hard for me to jump Buddy at first.  For as little time jumping as he had, he was rock solid and able to fix my mistakes.  I took him to a little hunter show in August 2010, and came home with three firsts, and a second.  That was such a good confidence boost for me!  A few weeks later Connie offered Buddy to me at a steal.  I said yes, and the rest is history. 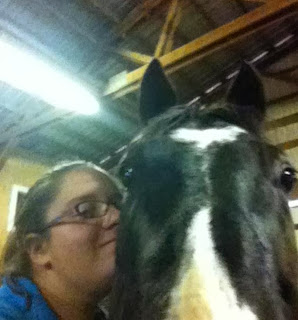 The first few years of this blog were dedicated to Buddy, but in June of 2014 he was sold to be a lesson/lease horse for a h/j barn.  We had moved up to the 3' jumpers, but at 18 it was too much for Buddy to handle.  He still has plently of life left, and is currently packing kids around the 2'3"-2'6" divisions.
﻿
﻿