Show season is pretty much over for Peebs and I.  There's a couple shows left on the calendar, but one is when I'm going to be at WEG and the other is the end of October, about 2hrs away, and held outside.  The chances of cold, wet, and windy weather doesn't really appeal to me much.  There is one in October about a half hour away and I think it's held inside.  I'd like to get more miles at 2'6" before we hit it hard next season but I'm kinda ambivalent about going. I was supposed to do a Rob Gage clinic in November, and was wanting to get more miles before that, but due to recent events that got cancelled. 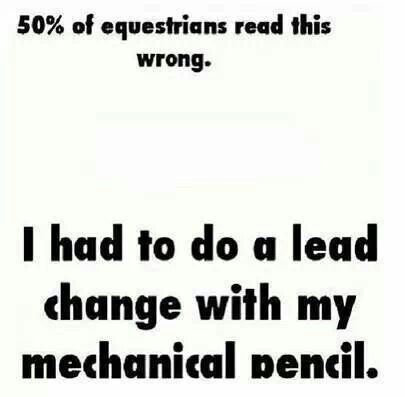 For sure we'll be focusing on lead changes this winter.  Besides my comfort at 2'6", that's our biggest issue.  Peebs has been started on them, but had his brain fried by a previous owner.  We've slowly started schooling them, mostly over ground poles, and I think we're making progress.  I can now ask for maybe 3-4 changes per ride vs one when I first got him.  He's probably around 75% getting them. I'm hoping to have a few lessons focusing on changes and am toying with having my trainer ride him a bit. I know she could set him up better, but I know his trust in me is a big part of our success so far.  He doesn't have the same bond with my trainer as he does with me. He's a pretty easy ride, but certain things set him off and lead changes are one of them.

I'm already tentatively marking out next year's show schedule with the plan to qualify for and compete at OHJA medal finals next Labor Day weekend. My parent's and I are going a big trip next April which will probably make one or two shows a no go. So I'm going off of this year's dates and working backwards to see what will work for next year. I want to make every show count! I've already told my trainer of my plans for medal finals and she's on board.
Posted by outofashes at 8:00 AM 2 comments:

Now that show season's basically over, Peebs is getting a little break while I do more with Cinder. There's a couple low key schooling shows in October and I'm thinking about taking Cinder to one.  It's 10mins from the barn, and a fundraiser for one of the college equestrian teams.  I've emailed the organizer and got the ok to do the trot pole class in hand.  I figure we'll enter and if she's sane enough to do it great, but if she's overwhelmed by a show atmosphere we'll just hang out instead.


I've started adding more adult horse things to her daily routine.  I picked up some bell boots for $8 on sale that she doesn't really need, but she can get used to wearing them. They looked super tiny but are actually a medium (maybe that's why they were on clearance?) but only slightly big on her.  I'm a lot little afraid of what that means when she's fully grown.  She also wore a surcingle for the first time and gave no shits about it.  That also fit better than I was expecting. She's grown wider and longer in the past month, instead of just up, so that helped.

I was helping friend A paint her jumps over the weekend and on Monday decided to take Cinder over for her first field trip. She jumped right in the trailer but once we started moving and she realized something was happening she started making a fuss.  We had a couple stops at intersections before we hit the highway and every time the trailer stopped she started bouncing around. She did quit after about 10 minutes. I was hoping A could help me unload since I expected Cin to be a fire breathing dragon, but A had a meeting run late and was going to get there about 15mins after me. But Cinder unloaded really well.  She was obviously ready to get out of the trailer but remembered how to back out nicely and not run me over.

I walked Cinder around a little then took her into A's dry lot paddock.  They don't have any horses currently in it, so the plan was to chuck Cinder in there for the day. A's mom came out and started filling the water trough and gave Cin a couple flakes of hay while I hand walked her around.  My barn has wood and hot wire fences and A's has hot tape so I wanted to make sure Cin wasn't going to try to go through the fence. The three old retired geldings A has boarded came over the fence line to meet Cin and (I should really stop being surprised by this) she had them all under her hoof in no time.  She knew she was hot shit and the boys would follow her. I let her loose and she ran around for maybe a minute before going back and forth from the hay pile to the boys.

We were at A's for about five hours and while Cinder called out a few times when the boys wandered off, she settled in and handled everything really well. She never ran around frantically, or paced, or seemed super agitated. When we went to load up to go home she jumped right in the trailer again like she's done it a thousand times. I didn't feel her make a fuss in the trailer on the way home and she unloaded like a champ again once we were home. Makes me super hopeful for her first show in October!
Posted by outofashes at 8:02 AM 3 comments: