The show photographer only got two of us but I bought both.  She looks darker in the pics, more liver chestnuty than I think she does in real life, or maybe she's changing colors and since I see her every day I didn't notice till now. She is definitely shedding something fierce right now, so who knows.

Cinder had her second show this past weekend and it went way better than I could have imagined. I was having major doubts going into the show, but Cinder proved to be a rock star. Part of my worries was because the last time I pulled my trailer out to do loading practice with Cinder, I felt something pop while backing the trailer up to park. The trailer breaks grabbed hard and I almost couldn't get the trailer to reverse. Our local dealership couldn't get my trailer in to work on it till last Monday, and they promised they'd have it ready before the show. I picked it up Friday afternoon and drove directly to the barn to head out to the show.

Cinder loaded well and we were off. We got to the show around 4pm on Friday and I let Cinder hang out in her stall for a while and munch hay. She was a little worried and called out a few times but seemed to settle in ok.  I took her for a walk around the facility (everything's inside) and when we got to the warm up ring she decided she wanted to play with the couple other horses being ridden.  There was some spinning, rearing, screaming, and cantering circles around me for about 10 minutes before I felt ok enough to do more exploring. We went in both the arena we'd show in on Saturday and the big arena with stadium seating. She mostly settled down but was still prone to spinning and screaming. I took her back to her stall, groomed her up and fed her dinner before getting my own food and going to the hotel. I was nervous enough to go back a few hours later for a night check and she seemed fine.

We were in the first class of the day, 2yr old and under halter, first thing at 9am. I got to the show around 7 to feed, then hung out in my truck for a while to let her eat.  We went for a little walk around 7:45 and she seemed slightly more relaxed till a someone warming up their reining horse cantered up behind us and passed really close.  That sent Cinder spinning and snorting. I put her back in her stall and slowly started grooming.  It was really weird to think I had a 9am class, but didn't need to pull my horse out of her stall till 8:59am. It's not like you need to warm up for a halter class. They started a few minutes late which worked for us because they put a big whiteboard out by the back gate and Cinder was convinced it was going to kill her.  We spent the 5 minutes waiting for the class to start snorting and sniffing the board.

There were two yearlings in our class, one very little pinto/arab cross and a QH. We walked into the ring and the judge had us do 4 strides of walk, then about 4 strides of trot on a straight line away from her before walking and lining up. Cin behaved herself very well for the trot but didn't want to stand still for more than 15 seconds at time. Luckily while the judge inspected us she stood well. The judge asked her breeding and nodded knowingly when I said warmblood. When she moved on to the other two the show photographer came up to me and said he had gotten a couple great shots of Cinder. He should have them up tomorrow so hopefully they turn out well.  We placed first out of the three which thrilled me.  I thought the QH might have beaten us, after all Cinder isn't your typical halter horse and the other two stood still in the lineup better than she did.

As we were walking out of the ring a local breeder (who actually bred the other two horses in the class) told me Cinder was absolutely gorgeous and congratulated me on the win. That felt amazing! I honestly expected to be a bit of an outcast at this show, what with my giant baby warmblood in a sea of stock type horses. We had a little over an hour till our green horse showmanship class so Cinder went back to her stall to hang out. I saw a family from my former barn's 4H group and the mom came over and gave me a big hug. We chatted for a bit and I watched her son go in his first ever class. It felt nice to see them, and to know that that relationship wasn't soured like most at my old barn. 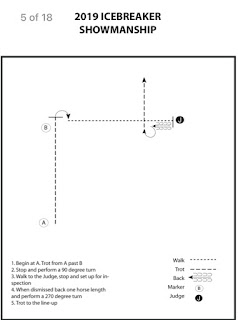 There was 8 horses in the green horse class. We went in in the middle of the group and again Cin had a hard time standing still waiting our turn. The trot portion was only about 30ft. Cin though that was dumb and did a lovely airs above the ground instead of halting. I stayed patient and once she stood we turned and walked to the judge. The judge commented that "Someone's been eating their Wheaties!" while inspecting her and thanked me. We placed 5th which again made me super happy.  I wasn't expecting to place since we can't do a trot-halt transition and our turns on the haunches are pretty much nonexistent.

I was so happy with how well Cinder handled herself.  The show was pretty big, with two rings going at the same time but only one warmup/waiting area. She had baby moments with not standing still, or halting at the cone, but that will come with time. For her first judged show, first time going away overnight, and first time around that much activity I couldn't be happier. I just want the show photographer to get his pics up!

It's been a relatively mild winter here in my part of the PNW.  The past couple of weeks have been colder, with some snow, but overall it's been warmer and dryer than normal. But I've hit that point of winter where I'm done with the cold, and the wet, and have lost my motivation.

Peebs doesn't seem to mind the little break he's getting.  I've been trying to ride 2-3 times a week, and usually lunge him once a week as well. He had a week off and when I got on him Monday I was prepared for the worst.  But he was foot perfect and a little lazy. I do need to get both our butts in gear since our first show of the season is in 6wks. I've told my trainer that I want to do every other week lessons, if not weekly lessons if our schedules can work, and to hold me to that.

Cinder has been getting a little more work lately.  She was naughty for her last farrier visit so we've done a little work on basic manners again. I did sign her up for a halter class at an open show next weekend, so we've been practicing our in-hand work as well. The plan is to take her down Friday night and let her spend the night there.  I figured it's a good experience for her and that way I don't have to get up ungodly early, try to load in the dark, and make it to the show 45mins away before our 9am class. We did a little clicker training and I've been using it for loading practice. She seems to get it, but she's so mouthy I've started giving her head scratches as a reward.  She loves a good curry and will maul you for head scratches.