When I went out to the barn last night, one of the western trainers that comes out, Sandy, was there doing lessons.  Connie was going to ride, but had to go out of town for work, and by the time she got back she was too tired so I took her lesson. She started out by asking me what I and Buddy had done, and what I wanted to work on.  I told her that Bud had been a western horse, but I has having problems slowing his canter down and riding one handed.

She had me start out by really exaggerating moving my hips to Bud's walk rhythm.  He didn't had a great rhythm to start, but after a few minutes we had a nice rolling forward walk.  Sandy also had me work on using my seat to turn and stop.  We did some nice walk/halt transitions where Buddy was really sitting back on his hind end.

In the trot, she had me start two handed and we worked mostly on my equitation...trying to keep my legs forward, with my heels down and toes turned out and sitting very deep, on the pockets of my jeans.  It felt so weird!  Again, we worked on trot/walk and trot/halt transitions using my seat.  Once we were warmed up, she had me go one handed, then do more transitions. My balance was defiantly off with my right arm down by my side.  Our transitions were not nearly as nice one handed, but they got better as I figured out my new balance points.

I went back to two hands for the canter.  It was ugly.  Sandy had to keep that deep seat with my legs forward.  It felt like I was water skiing. I was to keep my legs off him, and only give a slight squeeze as I half halted him to keep him going.  Buddy was pretty strung out and unbalanced, and I really wanted to pick up my reins and balance him off the bit but Sandy kept telling me to leave my reins long and just keep half halting him.  By the end he was starting to get it, but it was really hard.  We definitely need to work on that. 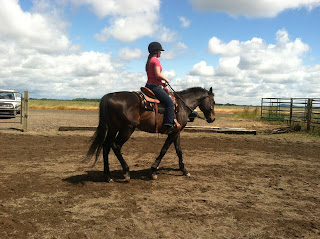 Today at the barn, Anna rode Phoenix western for her 4H lesson.  I only saw the very end, but they looked good.  Phoenix seemed fine having a shanked bit in his mouth, but was a little confused when Anna tried to neck rein.

Anna is also working with a mini that's at the barn, Rosy.  She's been ground driving her and today a friend of Connie's brought a cart over for Anna to try.  Rosy did great!  She hasn't been driven in over 9yrs, and after a little attitude at first, she acted like she's done it yesterday.  A few of us got to practice driving, and it was SO.MUCH.FUN! 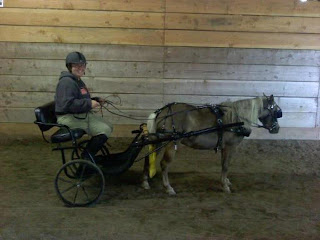 Posted by outofashes at 5:58 PM