Cinder went to her second show under saddle this weekend, the Inavale One Days. We hauled down Friday afternoon and Trainer A schooled her and then showed on Saturday.

Cinder was a little wound up Friday after arriving, but we went for a long hand walk before I chucked her in her stall and went to watch some of the kids ride. When A got on, a tractor had just started aerating the warm up area and I, being the h/j person, was like "Oh no, we need to find somewhere else to ride." while A was like "WTF, no I'll just work around the tractor." And she did. She made Cinder follow the tractor for a few minutes till Cinder didn't care about it and then proceeded to ride for 30 minutes working around it. First big difference between eventers and h/j'ers. 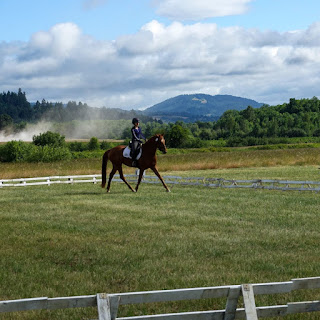 After all of A's students had ridden and settled in, a few of the parents broke out the BBQ and we had a team dinner sitting around the trailers and campers. I tucked Cinder in for the night and left while A was rounding up the kids for course walks. I kinda wanted to walk the XC course, but I had worked in the morning before leaving to haul Cinder and I was exhausted. I was more than happy to pull the ammy owner card and not have to walk the course.

For Saturday, we would be juggling A's rides on her gelding going Training, A's rides on Cinder and one of A's students at Beginner Novice (but in different divisions), then the rest of the kids at intro and grasshopper. A's dressage on Metro was at 8:06 and her dressage with Cinder was at 9. Thankfully one of A's friends was there to play groom for Metro so I could focus on Cinder. As soon as A was done with Metro we threw her saddle on Cinder and she got on for a long warm up. Which was definitely needed as Cinder was super spicy. The temps had dropped about 30* in four days, and we had some strong winds and a little bit of rain off and on all day Saturday, so that plus the show atmosphere had Cinder feeling herself. There were some bucks, and one impressive bolt, but about 25 mins in you could see her relax and start to focus.

The test went really well. Cinder did want to pop above the contact, and did a few canter steps in the second trot circle, but overall for a 4yr old's first dressage test, both A and I were really happy. She got a 38.9 which A felt was little high and put her 11th out 13. I was just happy she did the things when she was supposed to, stayed in the court, and A stayed on her back!

Cinder then had an almost 2 hour break before show jumping, so she got untacked and got to hang out in her stall for a while. A had both SJ and XC for Metro in between, plus her student's dressage. I brought Cinder back out right when A was done with Metro so we switched tack again and A headed out with Cinder. The SJ course was the same for all divisions, with Training having two, two stride combinations and BN just having one. 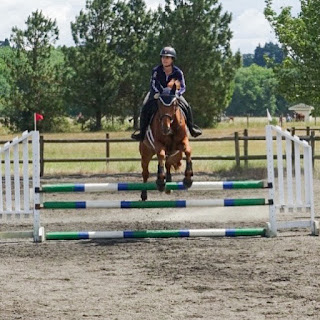 The SJ arena is on the smaller side (for the recognized horse trials they use the grass fields for SJ but for the one days they use their sand arena) and they had a lot of jumps crammed in there.  And they had maxed out the height/width of all the fences. A actually said the course was more of a Novice level course than a BN, especially for a schooling show. Cinder had never actually done a full course at this height and A was a little worried about how she'd do. 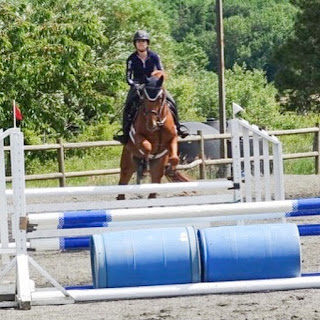 Overall Cinder did great! She was definitely impressed by some of the jumps, most notably the blue barrels in the two stride which caused a number of run outs/pulled rails, but she took everything in stride and came out much more confident. A got a little lost on the way from 7 to 8 which was a really, really tight roll back turn from the two stride to a single diagonal, and wound up off her line to fence 9 and which aimed Cinder at the standard of 9.  Cinder blew past it and they had to circle back. But even with the refusal and circle, they still ended up 2 seconds under time.

A was kicking herself for messing up to the last fence, but I was just happy they got over everything. It was a tough course for a seasoned pair, let along a baby horse. Like I had no desire to ride that course with Peebs. Even with the 4 faults, they moved up to 10th out of 13. 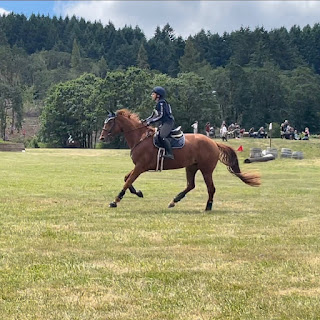 Cinder got about a half hour break before XC while A warmed up her student for SJ. Both A and I were expecting Cinder to be a little fried, but she seemed to settle into the whole horse show thing really well. She was happy to stand around SJ warm up, then XC warm up till it was her time to go. A didn't really do much to warm up for XC, just pop her over the logs they had set up maybe twice before ambling to the start box. She trotted out of the box and to the first fence, then let Cinder have an easy pace around the course. 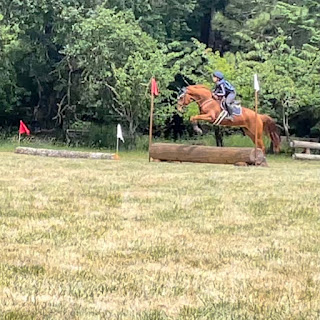 There was an option on course, either do the water or a log and trot up the mound. The log/mound route was longer, but A decided to do that instead of trying to get Cinder in the water. Which was a good idea because Cinder looked hard at the water and almost stopped at the log because she was so concerned about it being next to the water. But she walked over the long and happily trotted up and down the mound.

They had 8 time faults on XC, and ended with a 50.9 in 8th place out of 13. But Cinder finished happy, and much more confident which was what the outing was all about. She had her spicy, green moments, but she learned and enjoyed herself and wasn't mentally or physically fried. A was super happy with her and so was I.

Posted by outofashes at 8:44 AM