We had a lesson on Thursday, and Buddy was awesome!  He was listening, not fighting me, had a great rhythm and was for the most part getting his lead changes.  Compared to how he was the day and week before, it's a complete 180.  The day before my lesson he was pushy and fighitng me; flipping his head every time I asked for him to collect or a downward transition.  I was trying very hard to keep my cool and not pick on him but it was so frustrating.  I didn't have high hopes going into the lesson.

I talked with Jen before I got on and decided to do our flat warm up in the draw reins.  He was convinced he couldn't move out in them, but was soft in my hand and didn't protest.  When we were ready to jump I took them off and put his martingale on.  Jen had us start by trotting in and out of a line, going downhill.  The first time thru we had to stop and back up in the middle, but after that he was good and even a bit lazy.  From there we went to doing a left to right diagonal off a short approach.  As long as I was sitting down and kept my leg on him it flowed well.  We then added a second fence, making it a bending line in an easy 4. I had given my phone to Anna so we have video evidence!

Then we moved on to a different bending line, a vertical to an oxer in 5.  He didn't get the lead change as easy this way, but it was still very nice for us. After schooling both lines a couple times we tried to put together a little course, but I had run out of pony.  Going to the second bending line I felt like I had no pony power and couldn't see the distance to the oxer and pulled him out.  We did school the oxer by itself then worked on getting Buddy forward to the black fence and getting our left lead after before we called it a day.

Considering how naughty and tempermental Buddy has been the past week or so, I was beyond thrilled with how good he was for the lesson.  Untill he got tired, it felt like we could go do whatever Jen asked and it was easy, no holding him back or trying to push him forward.  Let's hope he stays this way since we are going to our first show of the year next weekend! 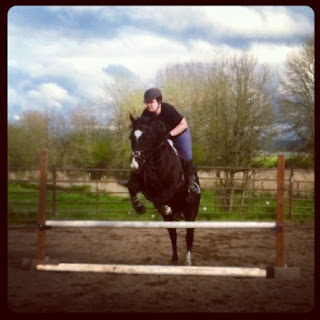 Posted by outofashes at 1:42 PM