Little bit of this and that from the last couple of weeks. 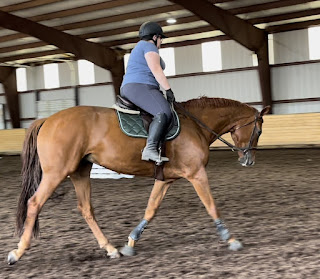 My last few lessons have been flat rides, mainly staying on a 20m circle. Cinder kinda lost the ability to canter nicely on the right lead for both A and I. She really wanted to go around with her head in the air and was convinced she couldn't canter on the bit. A has had me really focus on getting her deep and low in the trot, imagining I had draw reins on as my visual. Once Cin was steady in the deeper trot, then I was to ask for the canter knowing she'd come up a bit, but since she was almost too deep she'd come up to where we wanted her. I definitely struggled a bit, but at one point A told me to two point the canter and I lost it completely, but we've gotten some really nice canter work out of it. 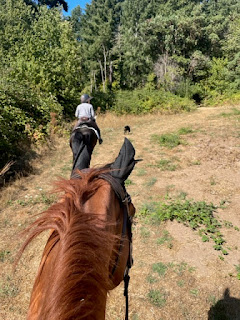 When I got to the barn for my lesson on Friday, A was tacking up Metro for a quick trail ride before my lesson. I mentioned a trail ride sounded nice and A told me to tack up early and we'd do a trail instead of an arena lesson. The BO had a mini excavator clearing out the stream and an old bridge at the bottom of the first part of the trail and Cinder was not too sure about it. We could hear it, but not really see it through the trees and I started to get nervous, so obviously Cinder got more nervous. And then Altivo, A's doberman, came running up behind us and spooked Cinder more. Cin is totally used to the dogs running around during trail rides, but she can be a little spooky if they come up fast behind her. She jumped forward into Metro, but being the saint that he is, he didn't care. Once we were in the woods I started to relax and so did Cin. We ended up having a great ride and I'm glad I kept going even when I was sure Cinder was going to loose her mind. 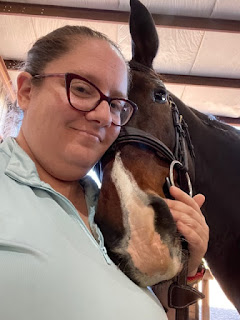 After the trail ride, I watched A school a client horse, while the client was riding her other horse. A got off and had the owner get on so she could explain a few things and asked me to hold Brownie. He is the sweetest, cuddliest horse ever, so I spent a very fun 15 minutes getting loved on. The owner's other horse is a little bit of a local celebrity, and I've admired him for years, doing the junior jumpers before a certain former Olympic trainer in the area took over the ride and did the 1.50m on him. G, the owner, does the 1.10m with him now and I told her if she wasn't careful I'd steal both of her horses. I also really enjoyed being a bit of a barn rat, hanging out watching other lessons/rides and then shooting the shit with people in the tack room. 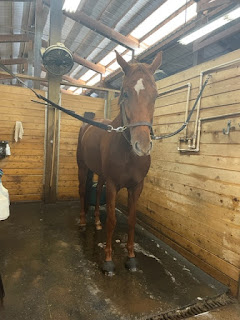 It was stupid hot for the end of summer over the weekend, hitting 91 on Sunday. I wasn't going to ride, just lunge, but when I pulled Cinder out of the pasture she resembled the Peanuts cartoon character Pig-Pen. The dust coming off of her was disgusting, so she got a fully soapy bath with a deep tail conditioning. She was not amused.

Posted by outofashes at 8:50 AM