Following the show, Cinder got a couple of easy days. A took her out on the trails Tuesday and did a stretchy arena ride on Thursday. Apparently Cinder had more energy than we thought she would. When A was turning her out Thursday night (she was on night turnout till this week) Cinder decided to choose violence. 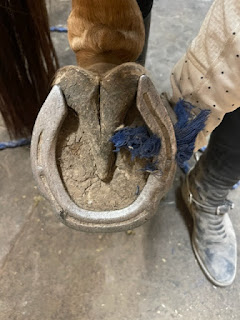 The horses are usually led double with a pasture mate and A was taking Cin's current BFF Violet out with her. Cinder objected, tried to kick Violet and almost got A who was in the middle. A let go of Cinder, who then proceeded to take a jaunt around the parking lot till she somehow got her lead rope caught in her hind shoe. She yanked the crap out of her head and destroyed the rope, but then stood quietly till A could come rescue her. 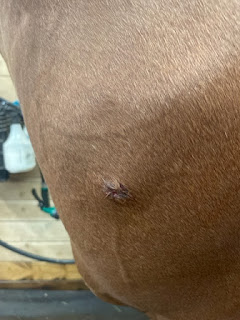 Then Saturday when I went up to ride I found the above on Cinder's right shoulder. She had been inside for a couple of hours and it looked fresh, so who knows what she did in her stall. I washed it and since she didn't seem bothered by it, decided to ride. She was having a total baby brain day, spooking at the new quads parked at the end of the arena (fair enough), spooking at a gate jump that was on the ground next to a cross rail (not fair as she's jumped that gate multiple times), forgetting she knows how to pick up the right lead, and being super distracted by two other horses who joined us half way through our ride. It was one of those rides that I was just happy we managed to w/t/c each way without dying. 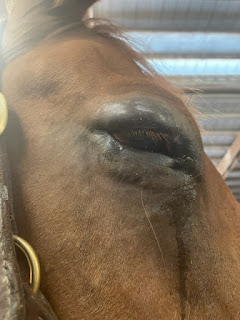 Finally, when I went up on Monday to ride I was greeted with this. Super swollen left eyelid and weepy eye. My first thought was that her allergies were acting up, as it's been super smoggy/hazy/dusty and we've had poor air quality alerts all week. I put a compress on her eye, which she loved, and smeared some ophthalmic ointment on it before shoving some banamine in her mouth. I also put her on Platinum's Skin and Allergy supplement, which I used last year for some hives. She also has two fly masks she'll wear 24/7 and we can rotate and wash them every couple of days. A has been putting the ointment on for me and said it's looking back to normal, which is great.

Posted by outofashes at 2:25 PM