Trainer A moved her program to a new facility, and last Friday I hauled up for a trainer ride/lesson. A has been looking to move for a while, wanting to expand her program, and while I had hoped she'd stay close to where she had been located, she moved farther north, to the outskirts of Portland. The facility is amazing with big indoor, huge outdoor, lots of paddocks and pastures, and 80 acres of xc fields and trails. I had been toying with the idea of moving Cinder, depending upon where A landed, but board at SF is about 3x what I'm currently paying and it's a little over an hour away with no traffic (and there's always traffic in this part of greater PDX) so hauling in will have to do. 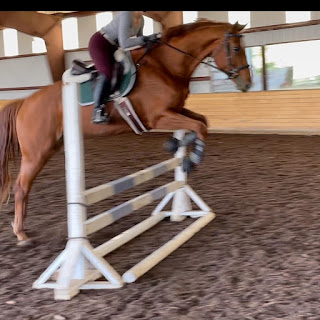 SF has about 60? stalls and there was a big h/j program moving in, lessons going on in the outdoor, and a vet working on horses when we got there. Cinder was pretty wide eyed so A got on her first in the indoor. Cinder could see the walkway on the hill from the barn down to the arenas and whenever she saw a horse along the path she sang the song of her people. Not in a too obnoxious way, more of "Hey I'm here" way. Over all she was really well behaved, if not as quiet and relaxed as she has been on previous outings. 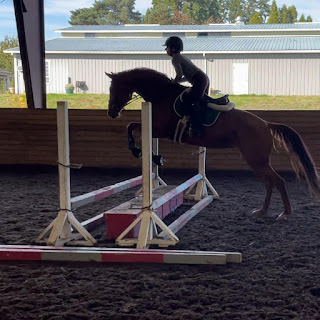 There were a few fences set up, and after adjusting fence heights (I learned I HATE the stupid metal cups seen above that just rest on the standard) A started popping Cinder over a few things. Cin peaked at some of the filler, but never thought about stopping or running out. She did get a little excited on a bending line into the one stride, and almost ran into a standard, but she figured it out and saved herself. A's been working on getting her to add a stride and not just leave super long and she's really starting to get it. She doesn't like it, but she's doing it.

I then got on for my first off property ride and jump school. We trotted a vertical a few times including one where Cinder let out a lovely whinny and bulged sideways, but I kept my nerves under control so at least one of us wasn't freaking out. Then A said to do the one stride and my brain promptly left my head. Thankfully Cinder is a very good girl and put her brain back on track and hopped through it like no big deal. We quit with that since Cinder was getting tired but I was so happy with how she did and myself for not getting too nervous. I'm hoping we can haul up once a month or so for lessons/rides and I do want to take her out on the trails there. We'll just have to see how time/money/traffic works out.

Posted by outofashes at 9:40 AM