The Good and the Bad

Let's start with the good. Cinder has been absolutely great the past couple of weeks. We did manage to get a lesson in with A two weeks ago, and while Cinder was little more up and distracted that she has been lately, we had a couple of great breakthrough moments.

One thing A said really clicked with me. Instead of thinking of pulling my elbows back, I'm to think of pulling them down. Once I got that visual in my head, I was able to put Cinder together and we had some really nice trot work. I can't remember elbows down for very long, and Cinder is still building muscle so she can't hold herself together for very long, but every ride since then we've been able to get that feeling back. 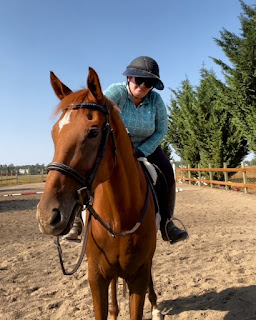 We also had a lesson last week with J. I told her what A had me work on, and she expanded on that. Cinder has developed a fun little habit of popping her left shoulder out while cantering to the right, especially as we go past the gate. Friend A had Scottie out during part of my lesson and while Cinder handled her buddy being around and having to work, once Scottie left, she really, really starting bulging out towards the gate. At one point my left leg almost hit a fence post. We had a little discussion involving my left heel and her side. And what do you know, our next canter circle was probably our best one yet. She was listening, actually straight, and was able to come into my hand and we had a few strides of this lovely, floaty canter.

In the bad news department, Peebs reinjured himself and made the very tiny lesion he had much bigger. About ten days ago he tripped while we were trotting. He had scraped up the knee on his good leg and we think he hyperextended his bad leg to catch himself. I took him in yesterday to ultrasound the leg and make a new rehab plan. He's getting a Pro-Stride injection next week, is on Previcox and 10mins of hand grazing for now, and then we'll restart with the hand walking. I'm pretty sure this was actually part of his plan to just be fully retired. F-ing horses, amiright?

Posted by outofashes at 2:04 PM