Just a Little Touch Up

Even though I'm not in Trainer A's barn anymore, she told me she still considers me "in her program". I even got to stay in the barn group chat about upcoming shows. So when A put it out to the group about going to a little jumper schooling show, I messaged her separately and asked if she wanted to show Cinder at it. She quickly responded, "Yes please!"

I asked A if she wanted to ride Cinder at all before the show, and her response of "I probably should" made me laugh. So last week she came down and I handed the reins over for a little touch up ride. I've jumped trotted a few cross rails since bringing Cinder home, so she hadn't had a real jump school since the end of June. But you would have never know that by the way she happily hopped around.

A said she felt really good, more inclined to stretch into the contact, and like she rode her last week instead of 6 weeks ago. It felt very, very nice to hear that I haven't screwed her up too much since leaving full training! They warmed up over some cross rails before I put the fences up. They had a few baby horse bobbles, including a run out in a bending line in which Cinder didn't really focus on the second fence till the last second. But she came back around and did great on the second try. 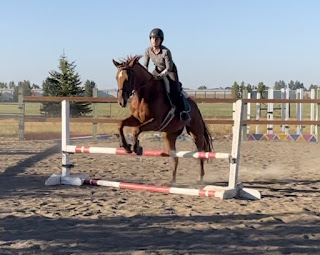 I'm excited to see them back in action together on Saturday! We're doing the show for mileage and experience, not ribbons and points, but I'm hoping we come home with some satin!

Posted by outofashes at 6:30 AM