Tuesday I had my second lesson on Cinder. It was a great lesson, especially because of the circumstances. It's been really, really windy and dry here; so windy I couldn't hear Trainer A unless I was within 10ft of her. And the footing in the indoor at Cinder's barn was pulled out last weekend and they're working on the base before putting in new footing. So we had to ride outside in the wind.  Thankfully Cinder didn't seem bothered by the wind at all, or the dressage letters and standards that had blown over. 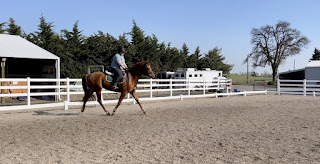 We started off walking and chatting with A for bit, then got down to work. We mostly stayed at one end of the ring so I could hear A. We worked on spiraling in and out on our circle, and not letting her get fast, or rushy. I want to push Cinder past her balance at this point, so A had me think about having more a western jog than a working trot for right now. Instead of adding more leg, I was to think about adding more half halts and balance.

We also did our first canter together! A had me pick it up out of a trot, which threw me because I usually pick up the canter out of a walk. Hunters vs dressage I guess. It took me a minute to organize myself, and for Cinder to figure out what the heck I was asking her to do, but we got it. And holy crap, her canter is so, so nice. She's got a great natural rhythm, it felt pretty dang balanced, and it was so easy and comfortable to ride. The way it feels just screams HUNTER. We did a couple circles before A had me go down the rail and I was so in awe of Cinder that I kinda forgot to steer and we almost left the arena, and then did a little drunken weave down the second long side. Oops. I have to remember that the power steering isn't installed yet.

We took a walk break then tried cantering the other direction. And then the guy working on the indoor decided it was a good time to fire up the tractor and dump some rock. As you can see from the pic above, Cinder had some feelings about it. She spooked twice, but other than a stride or two of flailing, they weren't that bad. I was able to stay on, and bring her back down to the walk both times within a circle. We did get a little more cantering in between the first and second spooks, but both A and I could tell her baby brain was thisclose to being fried so we ended by walking some circle and figure 8s at the far end of the arena.

I was so impressed with how well Cinder handled everything. When I had ridden Peebs the day before in the wind, he was good but obviously not happy about it. And since tractors are his biggest fear, I know he would have noped out the situation as fast as he could, and his brain would have been fried long before Cinder's was. I told A I was more worried about the tractor due to Peebs' trauma than Cinder was and kept anticipating her to be worse. She has such a good brain on her!

Posted by outofashes at 8:06 AM