One down, one to go

Phoenix got body clipped tonight.  He doesn't grow much of a coat, but he sweats a ton.  This past week it's cooled down and after almost every ride he's been very sweaty.  Anna's had to do a lot of currying and walking him with his cooler on to get him to dry.  I decided a few days ago that it was time he got clipped.  I had ordered new blades from Schneider's last week, as they  had a buy one get one free sale but they hadn't come in yet.

I'd forgotten how wiggly Phoenix can get when I do his stomach.  His whole side will twitch and he dances around.  He also seemed sore when I did his right hip/stifle area.  I know he has arthritis in that stifle and has had it injected before.  I've been playing with the idea of getting it injected again but will wait to see how he does this winter.  Anna's starting to jump him a bit more, still just x-rails but she's taking a few lessons a month and wants to show him over fences next spring. 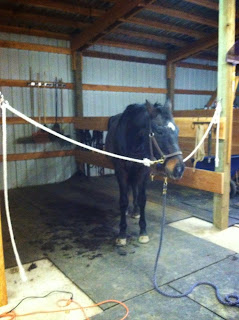 I still have to go back and do touch up tomorrow, but it was dinner time and Phoenix was getting upset so I called it a  night. I'm also planning on doing a trace clip on Buddy but after our show next weekend and after my new blades arrive.
Posted by outofashes at 7:56 PM