In continuing with our good lesson vibes, we had another great lesson last week. It's been my first jumping lesson since Cinder has been up at SF and much needed, since we're showing this weekend. I have jumped her a little on my own, and A has been jumping Cin once a week or so and has said she's been great. Cinder really doesn't care about what you put in front of her or what the distance is. She's gonna jump it, and continue on like nbd.

We did a quick warm-up on the flat before starting over some crossrails. A wanted me to figure 8 two single fences on the diagonals and gave me the option of the short approaches or the long approaches. In an uncharacteristic move, I chose the long approaches since those tend to be the hardest on course. And what do you know, they were the easiest. Cinder has a really nice natural rhythm, and has finally started to find a nice balance, so all I really had to do was keep her straight and find our line and the distances were there. I do need to work on holding her out a bit on the landing side corners, especially if she switched her lead over the fence, but I think part of that issue was me being so happy about the approach and distance I forgot to ride the landing a bit. 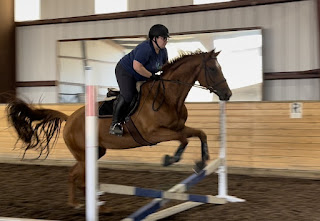 We then picked up an outside line that was a three to a one. There were placing poles down for the horse in the lesson before me, and A decided to leave them to see what Cinder did with them. Not going to lie, I was quaking in my boots approaching the line. I did let Cin get a little behind my leg coming in and didn't really help her out in the line, so we messed up the three and the poles kinda caught Cinder off guard a bit. But she gamely kept going and tried to figure out where to put her feet. Never felt like she was going to stop, or run out, or do anything naughty. And after we made it out of the line, she kept going like it was nothing. We came back around to it, after A pulled the poles, and she went down the line like we hadn't just royally screwed it up. I know A has told me before that Cinder DGAF, but this was my first time really experiencing it.

A then put the fences up a bit and gave me a little course. I had a brief existential crisis about it, but once again, Cinder DGAF. The fences rode the same as they did when they were crossrails. I just need to get out of my head and ride the rhythm and keep my leg on. Cinder feels much more solid and easy than I ever expected and I'm still in awe of her. Fingers crossed we can keep this feeling at our show this weekend!

Posted by outofashes at 2:50 PM