Peebs and I did our second show of the year last Sunday. It was the second show in the same series as the first one that we did. This time we did two equitation classes and two jumper rounds.

The show has a couple of $500 equitation challenge classes; a gymnastic class and a handy and dandy equitation class. Originally each class had a 2'6" and 3' section, but due to popular demand, they added a 2' section for this show. I didn't realize that till the morning of, and looked at the courses before deciding what to enter. The gymnastic class called for no stirrup work, and a trotting a fence without stirrups, so I decided to do the handy class instead. I have no shame pulling the weenie, flabby ammy card.

Peebs was little more awake and distracted for the handy class than he normally is. Trainer and I talked about it, and decided to go for the inside turn from 1 to 2, as that turn also showed up in my jumper rounds and there wasn't a whole lot of space between the outside fence and the rail. I was to take fence 1 on a slight angle, as Trainer was afraid of me loosing the impulsion in squaring off the turn, and angling it would encourage Peebs to land on his left lead. I liked how I rode the turn, but I cut the turn to sharp to 2 and we ended up aimed at the inside standard. Peebs never felt like he locked onto the fence either, so I circled and re-approached. So much for winning a piece of the prize money. But the rest of the course rode well and I mainly wanted to use the class as a warm up for our medal round.

The medal round was at 2'3" and I don't think Peebs realized the fences had gone up a hole as he smacked the first fence pretty hard. It stayed in the cups, but since there were only 3 of us in the class and no one else hit poles, I knew we were going to be on the bottom. Peebs was more focused and with me for this round, but also strong and wanting to counter bend and motorcycle around the turns. He's earned himself some flat work boot camp, as well as halting straight after fences for a while. But overall I was happy with our two equitation rounds. None of the fences looked big or felt scary and I could see every distance and know when I needed to hold or move him up. 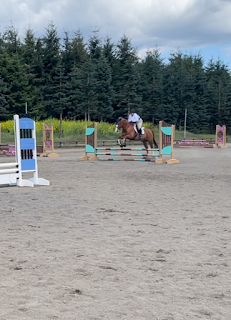 We had about a two hour break before my jumper classes.  Peebs paced a bit at the trailer and tired himself out, which was a good thing. I tried to focus on bending and moving his shoulders around in our warm up, but the arena wasn't that big and trying to work around other people was tough. He was more rideable and I was ready for our 2'3" jumper rounds.

I never really got Peebs in front of my leg for our first round, and we never fell into a rhythm. I know we pulled a rail, but can't remember at which fence. We placed third out of three again. My instructions for going into the second round were to gallop him across the arena to the first fence, then settle a bit on the approach and keep that pace the whole way around. Peebs was definitely tired by this point and I had to help him a bit more, but we found our distances and I was really, really happy with the round.

Till the second to last fence. It was the turn from jump 1 to 2 in the eq class above, now fences 8 and 9. I had dropped to the trot for a simple change coming up to fence 8 and Peebs thought we were done. He kept trying to drop his head and stick his front leg out. I was pulling his head up and kicking but he was determined to scratch his head while trotting. I realized there was no way we were making it over fence 8 and stopped him, where he immediately started rubbing his head on his leg. I had forgotten my crop at home so I couldn't whack him, but I booted him forward and circled back to 8. I did nail the inside turn from 8 to 9 so at least I redeemed myself there.

I was pretty pissed at the time, but now I can look back and laugh. The day as a whole went really well, with just a few bobbles that can be fixed. I felt comfortable with the height, felt like the courses were within our capabilities and dare I say it, maybe ready to move up? Just next time I'll remember my crop in case Peebs decides he needs to itch again.