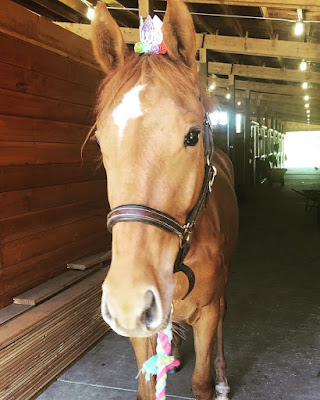 We also started working on the longe more and revisited wearing tack.  She's totally fine being saddled and having the girth tightened.  She's fine walking with the saddle.  She's very not fine being asked to trot while saddled.  There was much rearing and head snaking involved. At one point she almost went over backwards but caught herself.  I was internally screaming as I had used my saddle instead of the crap Wintec on her.  We'll go back to using the Wintec until she's over her feelings about working under tack. I'm also internally screaming as she fits perfectly into Peeb's 48" girth.  Like, it was on the exact same holes as he uses. Just how big is she going to get?!
Posted by outofashes at 10:10 AM