My vet was able to come out Sunday evening (and bless him, didn't charge me an after hours fee) and change Peebs' bandage and check the leg. It didn't look nearly as bad as I had thought. I'll post the pic at the bottom of the post so if anyone's squeamish they can skip it. 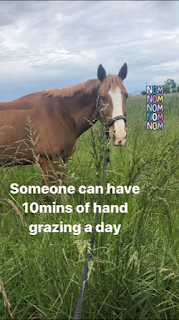 Vet poked and prodded the leg a little bit and showed me what parts of skin were dying off and will need to be trimmed. He also thinks one of the stitches will blow but left it for now. He said since Peebs is sound and since there's no swelling he doesn't need to be on the bute, which is nice. Peebs is still on the antibiotic till Thursday, when I do the next bandage change. I'm to take pics and text them to my vet and he'll decide if we should continue antibiotics or not then.


Peebs got cleared to have access to the paddock attached to his stall, and can get 10mins of hand grazing a day. It's supposed to rain on and off all week and if it downpours Peebs need to be shut inside. Peebs generally doesn't like being out in a downpour, so I'm 99% certain he'll be inside the stall anyways.

The stitches will come out in 3 weeks. Peebs is due to get his teeth done and sheath cleaned in June so I'm going to call and schedule an appointment for everything all at once. Cinder's teeth will also be due, so it's going to be a fun day for my poor wallet. Scottie is also due for teeth so at least A and I can split the farm call fee.


Without further ado, the leg: