Cinder got her first set of stitches yesterday.  We're not exactly sure how it happened, but she got  a small cut on the inside of her right front, a scrape on her face, and a large gash on her left stifle. Based on part of the wire fence being down and cap off the top of a t-post, we're assuming she either got caught in the wire or she and Peebs had a altercation through the wire and Peebs nailed her. Peebs is fine.

I got the call from A's mom around 10 on Tuesday morning and immediately left work. My supervisor is a horse girl so all I said was "Cinder probably needs stitches" and she told me to go. It's super nice not having to explain horsey related things to my boss.

My regular vet was out for a few days working on his new clinic (which will be like 2 minutes from the barn, yay!) so I had to call the vet school.  Thankfully they could make it out or else I would have had to haul Cinder in. Once they were out the doc agreed with me that the stifle wound needed stitches and they went to work.

He had two vet students with him and one seemed reluctant to actually touch Cin. She was much more comfortable holding the ipad and inputting all the info.  The other one jumped right in and started clipping and cleaning the wound. Cin was due for her fall vaccines in a few weeks so I had them do those while the sedation kicked in. Why just do a tetanus now and poke her again in a few weeks when I could do it all at once?

While the one student started suturing the Dr. asked the two what else they needed to consider. Both girls gave him a blank stare and he prodded them about aftercare. Still more blank staring. He mentioned a barn being full of dirt and poop and flies, horses being turned out in the elements.  Still nothing from the students.  I couldn't stand it and blurted out "Antibiotics". He said yes and that there was still other parts of aftercare to consider.  After more nothing from the students I said "pain management".  And then after the Dr. said he'd want Cinder on banamine, one of the girls kept trying to give me bute. I know they're still students, and just starting their clinical rotations, but it was killing me that these girls didn't have any answers. 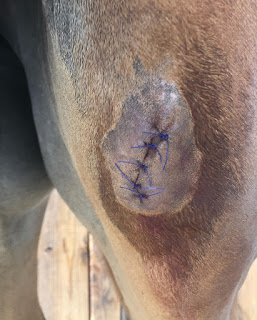 Cinder ended up with 5 stitches. Thankfully it wasn't a deep laceration and there doesn't seem to be any joint involvement.  I will have to have my vet out in 2-3 weeks to remove the sutures. Cin's on twice daily banamine for three days, and twice daily liquid sulfa for five days. Both are syringed into her mouth and she is not a fan. Part of her banamine this morning ended up on me and the floor of her stall but she did take the sulfa fine. I kept her stalled yesterday since we had thunderstorms, and she's in today but if everything looks good when I go out tonight I'll probably turn her back out. Fingers crossed for a quick and easy recovery!
Posted by outofashes at 9:30 AM